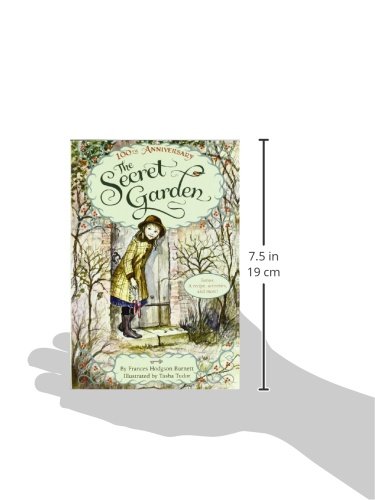 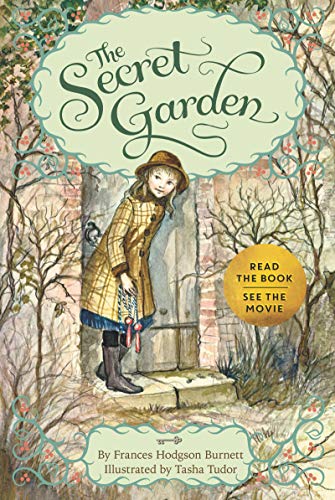 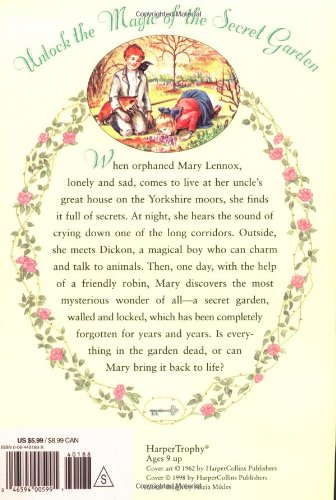 Amazon.com Review Mistress Mary is quite contrary until she helps her garden grow. Along the way, she manages to cure her sickly cousin Colin, who is every bit as imperious as she. These two are sullen little peas in a pod, closed up in a gloomy old manor on the Yorkshire moors of England, until a locked-up garden captures their imaginations and puts the blush of a wild rose in their cheeks; "It was the sweetest, most mysterious-looking place any one could imagine. The high walls which shut it in were covered with the leafless stems of roses which were so thick, that they matted together.... 'No wonder it is still,' Mary whispered. 'I am the first person who has spoken here for ten years.'" As new life sprouts from the earth, Mary and Colin's sour natures begin to sweeten. For anyone who has ever felt afraid to live and love, The Secret Garden's portrayal of reawakening spirits will thrill and rejuvenate. Frances Hodgson Burnett creates characters so strong and distinct, young readers continue to identify with them even 85 years after they were conceived. (Ages 9 to 12) Product Description Celebrate an unforgettable classic with this paperback edition featuring the timeless art of Tasha Tudor. Just in time for the movie adaptation starring Colin Firth and Julie Walters! This gorgeous paperback includes Tasha Tudor’s iconic illustrations, an extended author biography, activities, and more, making it the perfect collector’s edition or a wonderful gift for young readers. When orphaned Mary Lennox comes to live at her uncle's great house on the Yorkshire Moors, she finds it full of secrets. The mansion has nearly one hundred rooms, and her uncle keeps himself locked up. And at night, she hears the sound of crying down one of the long corridors. The gardens surrounding the large property are Mary's only escape. Then, Mary discovers a secret garden, surrounded by walls and locked with a missing key. With the help of two unexpected companions, Mary discovers a way in—and becomes determined to bring the garden back to life. Review "[Neglected Colin] lives the life of a spoilt and incurable invalid until the arrival of an orphaned cousin. The two children secretly combine to restore his mother's locked garden and Colin to health and his father's affection."-- "Four to Fourteen.""A most attractive edition in every respect." -- "BL." From the Back Cover "One of th' gardens is locked up. No one has been in it for ten years." When orphaned Mary Lennox comes to live at her uncle's great house on the Yorkshire Moors, she finds it full of mysterious secrets. There are nearly one hundred rooms, most of which are locked, and the house is filled with creepy old portraits and suits of armor. Mary rarely sees her uncle, and perhaps most unsettling of all is that at night she hears the sound of someone crying down one of the long corridors. The gardens surrounding the odd property are Mary's escape and she explores every inch of them—all except for the mysterious walled-in, locked garden. Then one day, Mary discovers a key. Could it open the door to the garden? About the Author Frances Hodgson Burnett (1849–1924) grew up in England, but she began writing what was to become The Secret Garden in 1909, when she was creating a garden for a new home in Long Island, New York. Frances was a born storyteller. Even as a young child, her greatest pleasure was making up stories and acting them out, using her dolls as characters. She wrote over forty books in her lifetime. Tasha Tudor's detailed, delicate artwork has been cherished by millions of readers. She illustrated nearly one hundred books, and received multiple awards and honors, including two Caldecott Honors. Excerpt. © Reprinted by permission. All rights reserved. Chapter One When Mary Lennox was sent to Misselthwaite Manor to live with her uncle everybody said she was the most disagreeable-looking child ever seen. It was true, too. She had a little thin face and a little thin body, thin

Amazing
Great
Average
High
This is a great price to buy! There's a 84% probability this price will be higher. Our advice is Buy it now.
Buy on Amazon

Tales from the Haunted Mansion Vol. 1: The Fearsome Foursome

The Arts: A Visual Encyclopedia

Tales from the Haunted Mansion Vol. 1: The Fearsome Foursome

The Arts: A Visual Encyclopedia

The Secret Garden Harperclassics, is it available on Amazon?

Yes! But at Pricepulse we inform you when is the lowest price to buy the The Secret Garden Harperclassics

Should I buy the The Secret Garden Harperclassics now?

This is a great price to buy! There's a 84% probability this price will be higher. Our advice is Buy it now.

What is the current price of The Secret Garden Harperclassics?

What was the lowest price for the The Secret Garden Harperclassics?