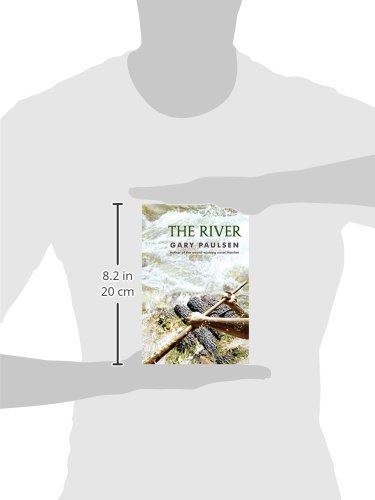 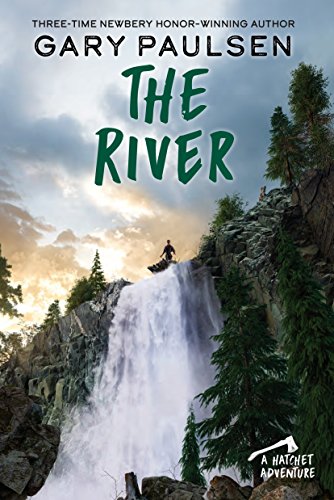 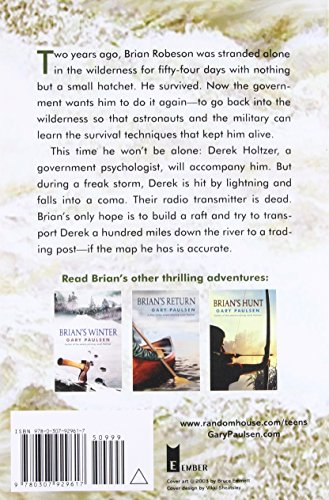 Product Description The government sends Brian back to the Canadian wilderness in this beloved follow-up to the award-winning classic Hatchet from three-time Newbery Honor-winning author Gary Paulsen!   Two years after Brian Robeson survived fifty-four days alone in the Canadian wilderness, the government wants him to head back so they can learn what he did to stay alive. This time Derek Holtzer, a government psychologist, will accompany him. But a freak storm leaves Derek unconscious. Brian's only hope is to transport Derek a hundred miles down the river to a trading post. He's survived with only a hatchet before--now can Brian build a raft and navigate an unknown river?   For the first time it's not only Brian's survival that's at stake. . .   An IRA-CBC Children’s Choice A Parents Magazine Best Book of the Year   “Vividly written, a book that will, as intended, please the readers who hoped that Paulsen, like Brian, would ‘do it again.’” — Kirkus Reviews Read all the Hatchet Adventures! Brian's Winter The River Brian's Return Brian's Hunt About the Author GARY PAULSEN is the distinguished author of many critically acclaimed books for young people, His most recent books are Flat Broke; Liar, Liar; Masters of Disaster; Lawn Boy Returns; Woods Runner; Notes from the Dog; Mudshark; Lawn Boy; Molly McGinty Has a Really Good Day; The Time Hackers; and The Amazing Life of Birds (The Twenty Day Puberty Journal of Duane Homer Leech). Excerpt. © Reprinted by permission. All rights reserved. Brian opened the door and stood back. There were three men, all in dark suits, standing on the front porch. They were large but not fat, well built, with bodies in decent shape. One of them was slightly thinner than the other two. "Brian Robeson?" Brian nodded. "Yes." The thin man smiled and stepped forward and held out his hand. "I'm Derek Holtzer. These other two are Bill Mannerly and Erik Ballard. Can we come in?" Brian held the door open to let them come in. "Mother isn't home right now...." "It's you we want to see." Derek stopped just in the entryway and the other two did the same. "Of course, we'll wish to speak to your mother and father as well, but we came to see you. Didn't you get a call about us?" Brian shook his head. "I don't think so. I mean, I know I didn't, but I don't think Mother did either. She would have said something." "How about your father?" "He doesn't live here. My parents are divorced." "Oh. Sorry." Derek truly looked embarrassed. "I didn't know." "It happens." Brian shrugged, but it was still new enough, just over a year and a half, to feel painful. He mentally pushed it away and had a sudden thought of his own foolishness. Three men he did not know were in the house. They did not look threatening, but you never knew. "What can I do for you?" "Well, if you don't know anything about any of this, maybe we should wait for your mother to come home. We can come back." Brian nodded. "Whatever you want . . . but you could tell me what it's about, if you wanted to." "Maybe I'd better check on you first. Are you the Brian Robeson who survived alone in the Canadian woods for two months?" "Fifty-four days," Brian said. "Not quite two months. Yes--that's me." "Good." "Are you from the press?" For months after his return home, Brian had been followed by the press. Even after the television special--a camera crew went back with him to the lake and he showed them how he'd lived--they stayed after him. Newspapers, television, book publishers--they called him at home, followed him to school. It was hard to get away from them. One man even offered him money to put his face on a T-shirt, and a jeans company wanted to come out with a line of Brian Robeson Survival Jeans. His mother had handled them all, with the help--through the mail--of his father, and he had some money in an account for college. Actually, enough to complete college. But it had finally slowed down and he didn't