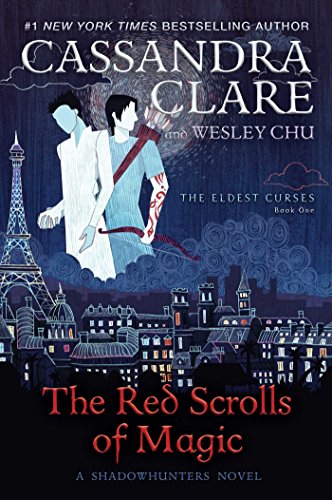 Product Description From #1 New York Times bestseller Cassandra Clare and award-winner Wesley Chu comes the first book in a new series that follows High Warlock Magnus Bane and Alec Lightwood as they tour the world after the Mortal War. The Red Scrolls of Magic is a Shadowhunters novel. All Magnus Bane wanted was a vacation—a lavish trip across Europe with Alec Lightwood, the Shadowhunter who against all odds is finally his boyfriend. But as soon as the pair settles in Paris, an old friend arrives with news about a demon-worshipping cult called the Crimson Hand that is bent on causing chaos around the world. A cult that was apparently founded by Magnus himself. Years ago. As a joke. Now Magnus and Alec must race across Europe to track down the Crimson Hand and its elusive new leader before the cult can cause any more damage. As if it wasn’t bad enough that their romantic getaway has been sidetracked, demons are now dogging their every step, and it is becoming harder to tell friend from foe. As their quest for answers becomes increasingly dire, Magnus and Alec will have to trust each other more than ever—even if it means revealing the secrets they’ve both been keeping.Age Range: Teen From School Library Journal Gr 8 Up–After winning a battle against evil enemies, Magnus Bane, a powerful warlock, and his new Shadowhunter boyfriend, Alec Lightwood, travel to Europe for a romantic trip to celebrate and test the waters of their new relationship. However, their fun is interrupted in Paris by chaos and rumors of a demonic invasion led by a cult, the Crimson Hand. Magnus is horrified to learn that he might have founded the murderous cult himself as a joke years earlier. He lives in constant fear that he will lose Alec. Many are suspicious of the warlock, wondering if he really is the one behind the killings. Alec will do anything to help clear his lover's name, even if it means keeping secrets from his family and friends. As they unlock Magnus's old memories and track the elusive cult, the warlock dreads Alec discovering the unsavory details of his past. Chronologically, Alec and Magnus's trip takes place during the fourth book of the "Mortal Instruments" series "City of Fallen Angels." Readers will want to be familiar with the other Shadowhunter stories, including the "Infernal Devices" series, because other characters from the books make appearances and there are some spoilers. With her usual dry humor and suspenseful action, Clare takes readers on a rollicking trip. VERDICT Themes of acceptance, self-worth, and compassion are well represented, making this selection an important addition to libraries that already have the author's other books.—Sandi Jones, Wynne High School, Wynne, AR Review “Sexual tension abounds as the two steal moments of sizzling romance while fighting demons and solving the mystery…Peak champagne-filled indulgence.” ― Kirkus Reviews "Magnus and Alec’s swoon-worthy romance explores the transformative power of love, while abundant action drives the tale to a harrowing finish." ― Publishers Weekly "It’s hard to get more star-crossed than demon-spawn and angel-spawn, immortal and mortal, but this is Clare in her element, and Chu (Time Siege, 2016) brings his deft hand at writing thrilling action and combat as Clare’s newest coauthor." ― Booklist "With her usual dry humor and suspenseful action, Clare takes readers on a rollicking trip." ― School Library Journal "A rip-roaring adventure merged with a satisfying romance." ― Entertainment Weekly About the Author Cassandra Clare is the author of the #1  New York Times,  USA TODAY, Wall Street Journal, and Publishers Weekly bestselling Shadowhunter Chronicles. She is also the coauthor of the bestselling fantasy series Magisterium with Holly Black. The Shadowhunter Chronicles have been adapted as both a major motion picture and a television series. Her books have more than fifty million copies in print worldwide and have been translated into more tha

Loved (The House of Night Other World Series)

Loved (The House of Night Other World Series)