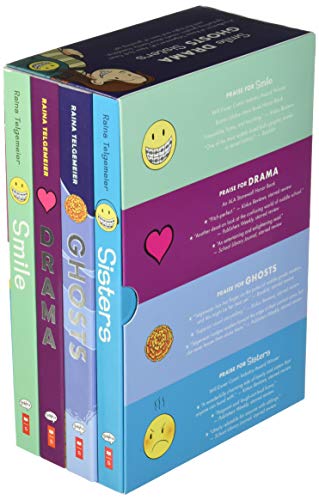 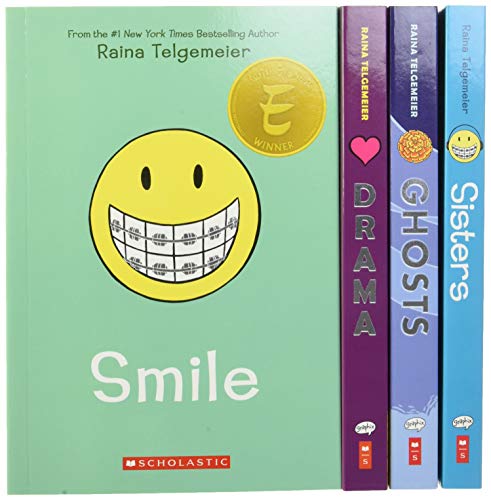 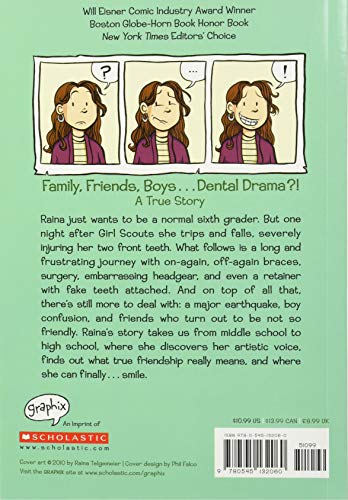 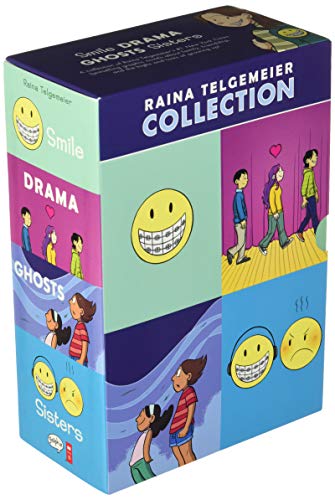 Product Description A box set of Raina Telgemeier's bestselling, award-winning graphic novels about family, friendship, and the highs and lows of growing up! Smile The true story of how Raina severely injured her two front teeth when she was in the sixth grade, and the dental drama that followed! Drama Callie is the set designer for her middle school's spring musical, and is determined to create a set worthy of Broadway. Both onstage AND offstage drama ensues! Sisters Raina can't wait to be a big sister. Amara is cute, but she's also cranky and mostly prefers to play by herself. Their relationship doesn't improve much over the years... can they figure out how to get along? Ghosts Catrina and her family move to a new town because her sister, Maya, is sick. When they learn there are ghosts there, Maya wants to meet one, and Cat must put aside her fears for Maya's sake -- and her own. Review Praise for Smile: #1 New York Times Bestseller Will Eisner Comic Industry Award Winner Boston Globe-Horn Book Honor Book "Irresistible, funny, and touching." -- Kirkus Reviews "One of the most widely loved kids' graphic novels in recent history." -- Booklist "It hits home partly because there is nothing else out there like it." -- The New York Times Book Review Praise for Drama: #1 New York Times Bestseller An ALA Stonewall Honor Book * "Telgemeier is prodigiously talented at telling cheerful stories with realistic portrayals of middle-school characters." -- Booklist, starred review * "Pitch-perfect." -- Kirkus Reviews, starred review * "Another dead-on look at the confusing world of middle school." -- Publishers Weekly, starred review * "An entertaining and enlightening read." -- School Library Journal, starred review Praise for Sisters: #1 New York Times Bestseller Will Eisner Comic Industry Award Winner * "A wonderfully charming tale of family and sisters that anyone can bond with." -- Kirkus Reviews, starred review * "Poignant and laugh-out-loud funny." -- Publishers Weekly, starred review * "Utterly relatable for anyone with siblings." -- School Library Journal, starred review Praise for Ghosts: #1 New York Times Bestseller * "Telgemeier has her finger on the pulse of middle-grade readers, and this might be her best yet." -- Booklist, starred review * "Superior visual storytelling." -- Kirkus Reviews, starred review * "Telgemeier nudges readers toward the edge of their comfort zone, but she never leaves them alone there." -- Publishers Weekly, starred review About the Author Raina Telgemeier is the #1 New York Times bestselling, multiple Eisner Award–winning creator of Smile, Sisters, and Guts, which are all graphic memoirs based on her childhood. She is also the creator of Drama and Ghosts, and is the adapter and illustrator of the first four Baby-sitters Club graphic novels. Raina lives in the San Francisco Bay Area. To learn more, visit her online at goRaina.com.

Amazing
Great
Average
High
It's not a good time to buy now, there's a 63% probability this price will decrease. Our advise is to Watch it.
Buy on Amazon

The Raina Telgemeier Collection A Box Set, is it available on Amazon?

Yes! But at Pricepulse we inform you when is the lowest price to buy the The Raina Telgemeier Collection A Box Set

Should I buy the The Raina Telgemeier Collection A Box Set now?

What is the current price of The Raina Telgemeier Collection A Box Set?

What was the lowest price for the The Raina Telgemeier Collection A Box Set?