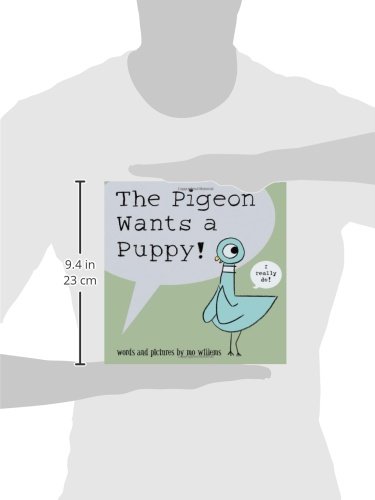 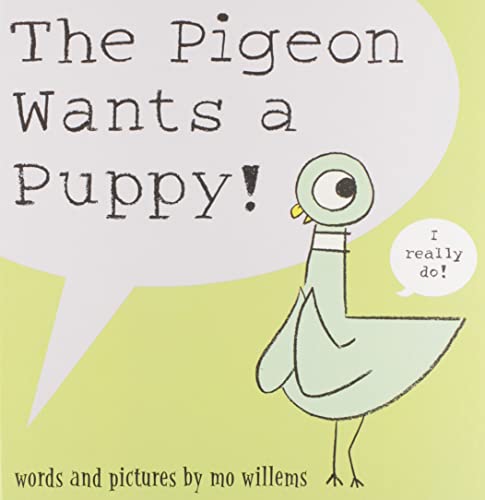 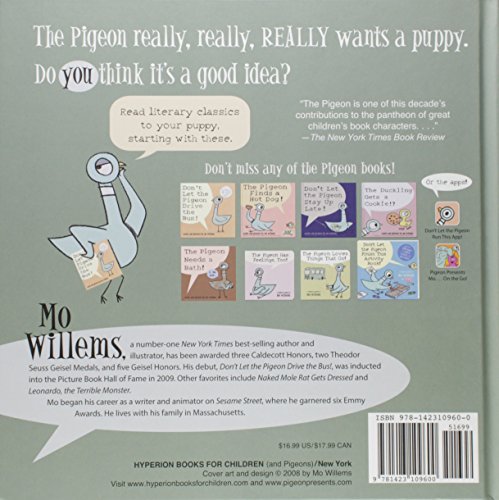 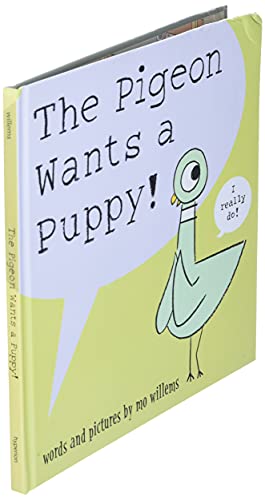 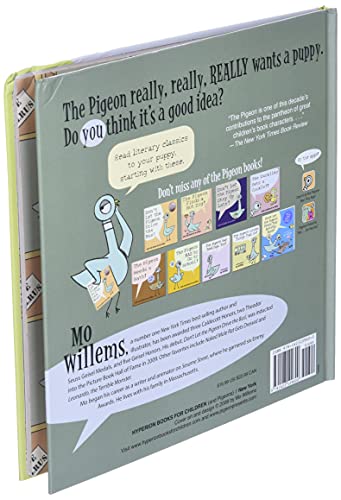 From School Library Journal Starred Review. PreSchool-Grade 3—The incorrigible bird returns in his fourth full-length romp. This time, Pigeon voices another common childhood dream: he wants a puppy. And he wants it NOW. He even promises to take care of it: "I'll water it once a month." He argues his case so forcefully that a puppy appears, but it's more than he expects: "The teeth! The hair! That wet nose!...I mentioned the teeth, right?" So he sets his sights on a different pet. Kids will love this perfectly paced picture book, which offers both the expected (breaking the fourth wall, Pigeon's classic temper tantrum) and a new twist (Pigeon actually gets what he wants? Impossible!). Willems's hilariously expressive illustrations and engaging text are cinematic in their interplay. Maybe kids won't appreciate the genius behind it the way adults will, but that won't stop them from asking for this book again and again.—Kathleen Kelly MacMillan, Carroll County Public Library, MD Copyright © Reed Business Information, a division of Reed Elsevier Inc. All rights reserved. Product Description He really, really, REALLY wants one. He'll take really good care of it! What's the matter--don't you want him to be happy? The latest book in the best-selling Pigeon series is the funniest one yet. From Booklist Pigeon, the stubborn preschool impersonator last met in Don’t Let Pigeon Stay up Late (2006), returns for another encounter with an unseen adult. This time, he’s angling for a puppy, and once again his approach perfectly mirrors a child’s, from calm reassurances (“Oh, don’t worry. I’ll take care of it!”) to sulking to a full-blown tantrum: “I WANT A PUPPY! RIGHT HERE! RIGHT NOW!” Amazingly, his dream comes true, but when a big, slobbery pooch appears in the frame, the terrified Pigeon discovers that, in fact, he may not be a “puppy-loving pigeon” after all. Maybe a walrus is more his speed. Willems skillfully executes the formula that made previous Pigeon titles so popular: minimal artwork that places all the attention on the cajoling little bird, whose words and body language will strike a chord of familiarity with every child. Once again, kids will reach the story’s end wondering what Pigeon will want next. Preschool. --Gillian Engberg Review The charming, exasperating pigeon returns, and this time he REALLY knows what he wants-or at least he thinks he does. As in his previous outings, he addresses the reader-"I'm fine. Thanks for asking"-and communicates a wide range of emotions through minimal words and a few deft pen strokes that brilliantly bring to life his one-of-a-kind personality. Following his now-familiar routine, the pigeon throws a tantrum and slyly attempts to manipulate the reader's (listener's) emotions: "You don't want me to be happy, do you?...You just don't understand." Be careful what you wish for might well be the moral of this tale, since the reality of a puppy turns out to be hilariously larger and more frightening than the pigeon's or readers' expectations. Even though the pigeon may get more than he bargained for, his many fans with find they get exactly what they've come to expect: lots of giggles. Kirkus" The heart wants what it wants, especially when that heart belongs to Willems's impetuous Pigeon. In his sixth book, the Pigeon tries to convince anyone within earshot that he should have a puppy. Listeners will know it's a bad idea from the get-go, whether they're already familiar with the bird's comic shtick or encountering the character for the first time. As in the previous books, the simple speech-balloon text and minimalist design put the action squarely in the foreground, demanding attention for the book's star-who scarcely needs any help in that department. The Pigeon's direct address ("Oh...I get it. You don't want me to be happy, do you?") encourages the audience to participate in the story; his wrong-headed assumptions ("I promise I'll water it once a month") spur kids to play the grownup.

The Masterpiece (One Big Canvas)

Tess, the Tin that Wanted to Rock

Squeaky and the Stinky Mouse

Save the Ocean (Save the Earth)

The Pigeon Wants A Puppy, is it available on Amazon?

Yes! But at Pricepulse we inform you when is the lowest price to buy the The Pigeon Wants A Puppy

Should I buy the The Pigeon Wants A Puppy now?

What is the current price of The Pigeon Wants A Puppy?

What was the lowest price for the The Pigeon Wants A Puppy?