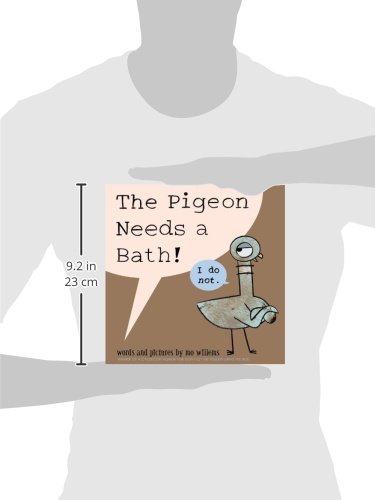 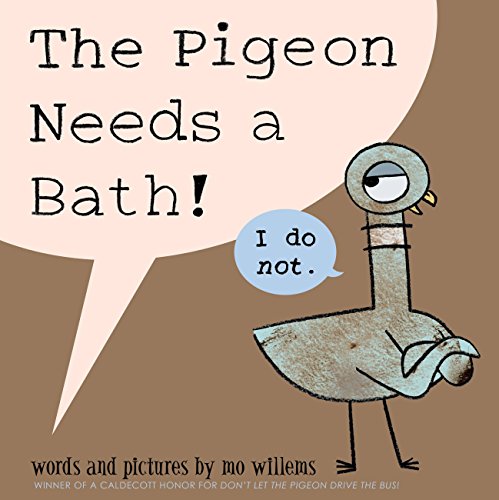 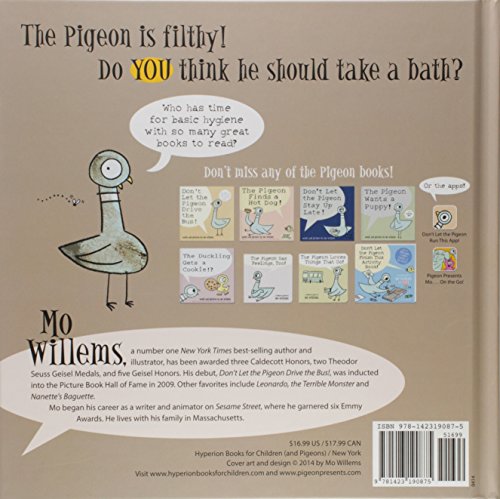 Review DON'T LET THE PIGEON DRIVE THE BUS! *"Brilliantly simple...hilarious."―The Horn Book (starred review) THE PIGEON FINDS A HOT DOG! *"Readers of all ages won't be able to resist miming the sly conversation in this satisfying sequel." ―A Publishers Weekly Editors Pick ―Publishers Weekly (starred review) DON'T LET THE PIGEON STAY UP LATE!: *"Children will be charmed by this bedtime treat."―School Library Journal (starred review) THE DUCKLING GETS A COOKIE!? "Just as enjoyable as a read-aloud to a group or as a one-on-one lapsit, it's a pleasure to see Willems at the top of his game, and The Pigeon suitably humbled."―Kirkus (starred review) THE PIGEON WANTS A PUPPY! 2009 Children's Choice Book Award for "Kindergarten to Second Grade Book of the Year" *"Willems's hilariously expressive illustrations and engaging text are cinematic in their interplay."―School Library Journal (starred review) Product Description The Pigeon really needs a bath! Except, the Pigeon's not so sure about that. Besides, he took a bath last month! Maybe. It's going to take some serious convincing to try and get the Pigeon to take the plunge. From School Library Journal K-Gr 2—Persuasive Pigeon is back. He doesn't feel that he really needs a bath—after all, it's a "matter of opinion." "Clean" and "dirty" are "just words, right?" With a polished technique that logically approaches the problem, Pigeon speaks with a child's voice as he rationalizes his decision while forcefully questioning those who might even suggest that his personal hygiene and the flies buzzing around are not just "coincidental." The water might be "too hot…not deep enough…too cold…or too wet," but it only takes a mere 30 tiny frames and a dramatic large-font spread before Pigeon grandly displays the myriad possibilities for a happy bird in the bath. Willems's dirt-smudged pigeon is at once clever, garrulous, energetic, and just slightly excitable. Through simple flat-line illustrations, this bird's expressions and attitude are easy to discern. Pigeon fans will not want to miss this book, a "must add" to all libraries, for any reader appreciating the perfect art of persuasion.—Mary Elam, Learning Media Services, Plano ISD, TX From Booklist Everyone’s favorite contentious misanthrope is back with a grubby vengeance. Our story begins as a hirsute human in bathrobe and shower cap implores our help: the pigeon needs a bath. The pigeon disagrees and begins his familiar pattern of resisting, stalling, and excusing, but even the flies that surround him can’t bear the filth. Eventually, he is forced to submit, and, after 28 little panels (and one medium-size one) in which he fusses over the tub and its myriad inadequacies, he relents and takes the plunge. And—surprise, surprise—he likes it. “TEN HOURS LATER,” the pigeon is a convert to baths. The details fans have come to expect are all present, from the simple, expressive drawings on blank grounds (though the customary pastel backdrops have been replaced by a variety of muddy browns and greys) to the before-and-after endpapers, complete with a rubber-ducky Easter egg. Pigeon’s many followers will be plenty happy with this latest offering, while parents of reluctant bathers will welcome its surreptitious endorsement. Preschool-Kindergarten. --Thom Barthelmess About the Author Mo Willems (www.pigeonpresents.com), a number one New York Times best-selling author and illustrator, has been awarded a Caldecott Honor on three occasions (for Don’t Let the Pigeon Drive the Bus!, Knuffle Bunny: A Cautionary Tale, and Knuffle Bunny Too: A Case of Mistaken Identity). Don’t Let the Pigeon Drive the Bus! was also an inaugural inductee into the Indies Choice Picture Book Hall of Fame. And his celebrated Elephant & Piggie early-reader series has been awarded the Theodor Seuss Geisel Medal on two occasions (for There Is a Bird on Your Head! and Are You Ready to Play Outside?) as well as three Honors (

Amazing
Great
Average
High
This is a great price to buy! There's a 81% probability this price will be higher. Our advice is Buy it now.
Buy on Amazon

Knuffle Bunny Too: A Case of Mistaken Identity

Pete the Cat and the Perfect Pizza Party

Knuffle Bunny Too: A Case of Mistaken Identity

Pete the Cat and the Perfect Pizza Party

The Pigeon Needs A Bath Pigeon 9, is it available on Amazon?

Yes! But at Pricepulse we inform you when is the lowest price to buy the The Pigeon Needs A Bath Pigeon 9

Should I buy the The Pigeon Needs A Bath Pigeon 9 now?

This is a great price to buy! There's a 81% probability this price will be higher. Our advice is Buy it now.

What is the current price of The Pigeon Needs A Bath Pigeon 9?

What was the lowest price for the The Pigeon Needs A Bath Pigeon 9?