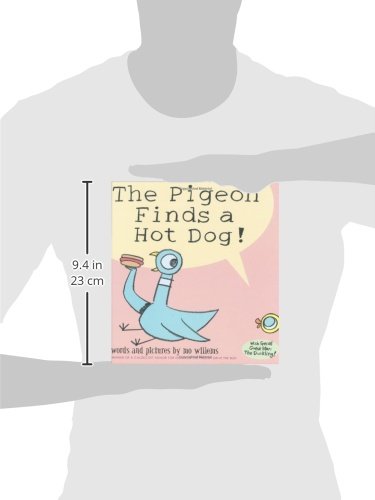 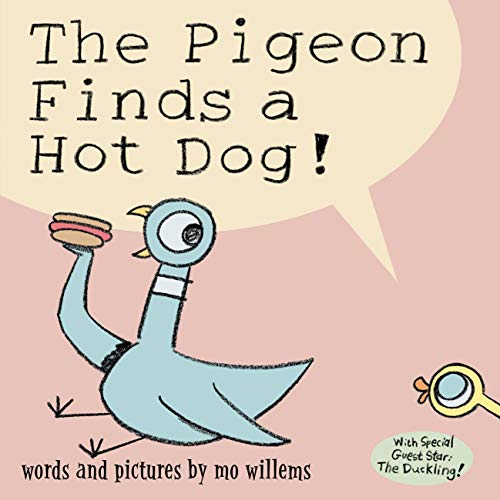 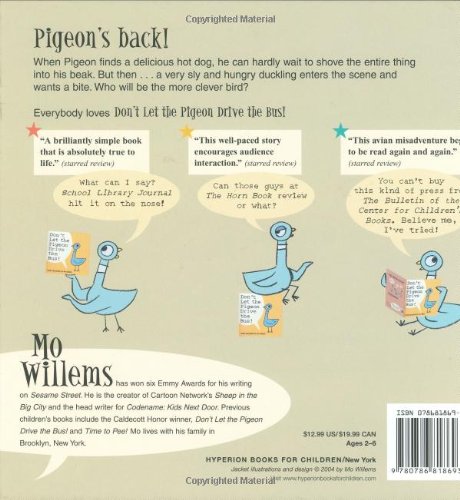 Product Description When Pigeon finds a delicious hot dog, he can hardly wait to shove the entire thing in his beak. But . . . then a very sly and hungry duckling enters the scene and wants a bite. Who will be the more clever bird?In this hilarious follow-up to the acclaimed Don't Let the Pigeon Drive the Bus! Mo Willems has created another avian adventure that encourages children to share even their most prized processed foods. Mo Willems is a six-time Emmy Award-winning writer and animator for Sesame Street and the head writer of Cartoon Network's Code Name: Kids Next Door. The Pigeon Finds a Hot Dog! is the companion to Mo's first children's book, Don't Let the Pigeon Drive the Bus! He is also the author of Time to Pee!. Amazon.com Review Sesame Street veteran and Emmy Award-winner returns with a fast, funny follow-up to Don't Let the Pigeon Drive the Bus!--only this time, the short-tempered pigeon faces his perfect foil in a "special guest star" duckling. In the previous Pigeon book, author and illustrator Willems expertly distilled the escalating emotions of preschoolers all too anxious to get their way. The Pigeon Finds a Hot Dog--also a simple and sparsely illustrated story--explores the flip side of that coin, exposing the poker-face persuasive powers of young negotiators. The pigeon just wants to greedily eat the hot dog that he's found: "Oooooh! A hot dog! Yummy! Yummy! Yummy!" Then along comes the duckling, "scooty scoot scoot!" with his insistent questions about hot dogs: "What do they taste like?...Would you say that it tastes like chicken?...Hey, I'm a curious bird." At first, the pigeon entertains the duckling, "Each morsel is a joy! A celebration in a bun!", but then he soon suspects the little bird might have designs on his delicious dog. In the end, of course, the clever duckling gets his way--and half of the hot dog: "You know, you're pretty smart for a duckling." (Ages Baby to Preschool) --Paul Hughes From School Library Journal PreSchool-Grade 1-In this second book featuring the star of Don't Let the Pigeon Drive the Bus! (Hyperion, 2003), the shoe is on the other foot. Once again, the action starts on the title page, with the pigeon's joyous discovery of a hot dog. However, his initial delight is dampened when a small, wide-eyed duckling appears and asks, in a seemingly innocent manner, "Is that a `hot dog'?" The interloper's younger status is conveyed not just through his tinier size, but also through his dialogue, which is presented in smaller, rounder font. Though the duckling never directly asks for a bite, his incessant questioning-"Would you say that it tastes like chicken?"-infuriates the pigeon. Ultimately, the duckling's subtle approach proves successful, and both birds happily share the treat. Children, especially those with younger siblings, will have come up with this obvious solution long before the pigeon does. Willems's deceptively simple cartoon drawings convincingly portray his protagonist's emotional dilemma, from his initial joy to his frustration and struggle over what he wants to do versus what he knows is right. Robin L. Gibson, formerly at Perry County District Library, New Lexington, OH Copyright © Reed Business Information, a division of Reed Elsevier Inc. All rights reserved. From Booklist PreS. In this follow-up to Don't Let the Pigeon Drive the Bus [BKL S 1 03], the wheedling pigeon with the short fuse meets his match. "Oooooh! A hot dog!" he cries, as he zooms in for a landing on the first page. Before he can enjoy his scavenged treat, though, a little duckling scuttles over and begins asking numerous questions: "Is that a 'hot dog'?" "What do they taste like?" The pigeon loses his temper in a wing-flapping rant before the duckling innocently suggests that they share the dog, thus sparing the pigeon the frustration of having to explain the taste. Share it they do, but the pigeon knows he has been had: "You know, you're pretty smart f

There Was a Cold Lady Who Swallowed Some Snow!

The Pigeon Finds A Hot Dog, is it available on Amazon?

Yes! But at Pricepulse we inform you when is the lowest price to buy the The Pigeon Finds A Hot Dog

Should I buy the The Pigeon Finds A Hot Dog now?

What is the current price of The Pigeon Finds A Hot Dog?

What was the lowest price for the The Pigeon Finds A Hot Dog?