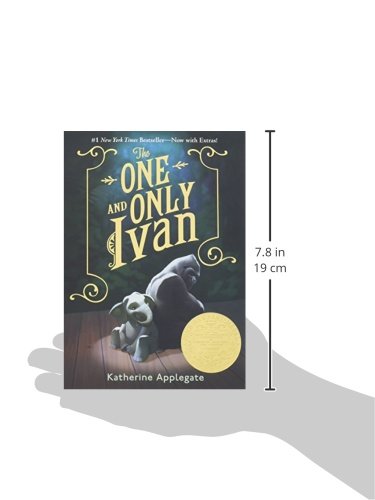 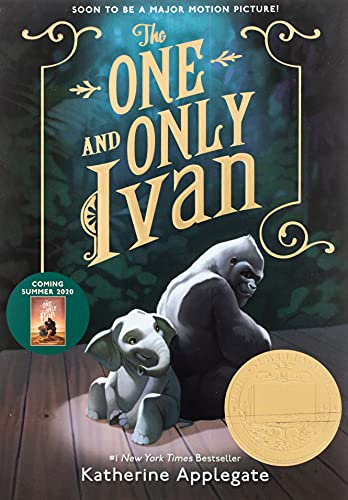 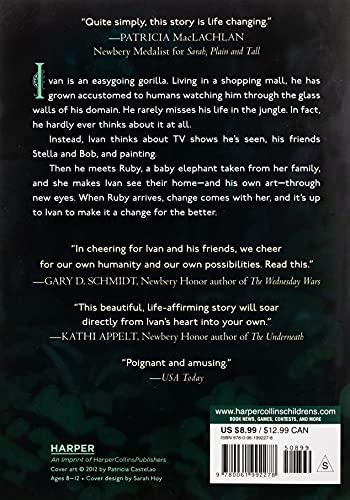 Review Winner of the 2013 Newbery Medal2012 Christopher MedalGold Medal in Juvenile LIterature, 2012 California Book AwardSociety of Children's Book Writers and Illustrators 2013 Crystal Kite Award Winner ------------------------------------------------------------------ #1 New York Times bestsellerSchool Library Journal Best of Children's Books 2012Kirkus Reviews Best of Children's Books 2012 Amazon 2012 Best Books of the Year, Middle GradeChicago Public Library Best of the Best 2012 New York Public Library 100 Books for Reading and Sharing, 2012Cybils shortlist, 2012 middle grade fantasy (Children’s and Young Adult Bloggers’ Literary Awards)Texas Bluebonnet Award, 2013-14 Master List2012 Nerdies Book Award, middle grade fiction Starred Review, Kirkus Reviews: "How Ivan confronts his harrowing past yet stays true to his nature exemplifies everything youngsters need to know about courage.”Starred Review, School Library Journal: “The characters will capture readers’ hearts and never let go. A must-have.” Starred Review, Bulletin of the Center for Children’s Books: “Extraordinary.” "Discover an animal hero that will take his place with other courageous and beloved animals such as Babe, Mrs. Frisby, Charlotte and Wilbur. Adults reading this aloud with children will find it just as rewarding.” --Shelf Awareness“The best book of 2012.” --John Schumacher (Watch. Connect. Read. blogger and 2014 Newbery committee member) and Travis Jonker (School Library Journal blogger, 100 Scope Notes, and 2014 Caldecott committee member) "Beautifully written, intelligent, and brave book…Quite simply, this story is life-changing.” --Patricia MacLachlan, Newbery Medalist, Sarah, Plain and Tall"The One and Only Ivan will break your heart--and then, against all odds, mend it again." --Gary D. Schmidt, Newbery Honor author of The Wednesday Wars "Kindness and its ability to change lives shines through on every single page of this book.” --Kathi Appelt, Newbery Honor author of The Underneath Product Description The #1 New York Times bestselling and Newbery Award-winning novel The One and Only Ivan is now a major motion picture streaming on Disney+This unforgettable novel from renowned author Katherine Applegate celebrates the transformative power of unexpected friendship. Inspired by the true story of a captive gorilla known as Ivan, this illustrated book is told from the point of view of Ivan himself. Having spent twenty-seven years behind the glass walls of his enclosure in a shopping mall, Ivan has grown accustomed to humans watching him. He hardly ever thinks about his life in the jungle. Instead, Ivan occupies himself with television, his friends Stella and Bob, and painting. But when he meets Ruby, a baby elephant taken from the wild, he is forced to see their home, and his art, through new eyes.In the tradition of timeless stories like Charlotte's Web and Stuart Little, Katherine Applegate blends humor and poignancy to create an unforgettable story of friendship, art, and hope.The One and Only Ivan features first-person narrative; author's use of literary devices (personification, imagery); and story elements (plot, character development, perspective).This acclaimed middle grade novel is an excellent choice for tween readers in grades 5 to 8, for independent reading, homeschooling, and sharing in the classroom.Plus don't miss The One and Only Bob, Katherine Applegate's return to the world of Ivan, Bob, and Ruby! From the Back Cover Ivan is an easygoing gorilla. Living in a shopping mall, he has grown accustomed to humans watching him through the glass walls of his domain. He rarely misses his life in the jungle. In fact, he hardly ever thinks about it at all. Instead, Ivan thinks about TV shows he's seen, his friends Stella and Bob, and painting.Then he meets Ruby, a baby elephant taken from her family, and she makes Ivan see their home—and his own art—through new eyes. When Ruby arrives, change comes with her, and it's