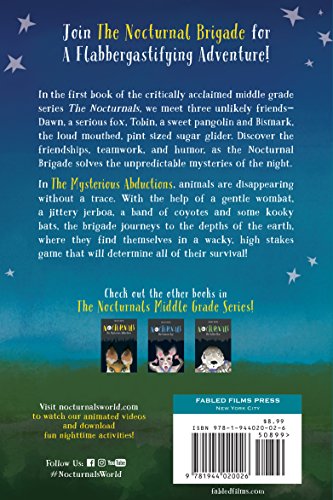 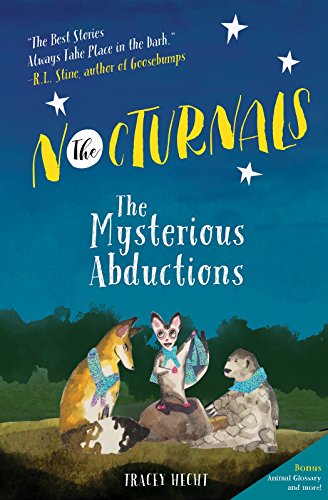 Product Description Perfect for fans of Wish and the Pax and Humphrey series, The Nocturnals is a fun-filled chapter book series about three unlikely animals who solve unpredictable mysteries of the night with friendship, teamwork, and humor. In the first book, The Mysterious Abductions, animals are disappearing without a trace—and it’s up to Dawn, a serious fox, Tobin, a sweet pangolin, and Bismark, a pint-sized sugar glider to find out why. With the help of a gentle wombat, a jittery jerboa, a band of coyotes, and some kooky bats, the Nocturnals journey to the depths of the earth and play a wacky, high stakes game that will determine their survival. Bonus full color illustrations at the start of each chapter! GREAT FOR READERS AGES 9-12 Now an AR Quiz! Download complimentary printable activities on the book's website: animal mask crafts, bingo, word games, discussion questions, and Common Core Language Arts and Next Generation Science educator guides. READ ALL FOUR ADVENTURES WITH THE NOCTURNALS In the second chapter book, The Ominous Eye, Dawn a serious fox, Tobin a sweet pangolin, and Bismark a pint-sized sugar glider investigate a sudden jolt that cracks the earth! They meet a mysterious reptile, a tuatara, who claims the beast who caused the crack may strike again. But can this tuatara be trusted? The Nocturnals team up with a fun array of forest animals to uncover the truth! Review Kids' Indie Next List Pick! “Featuring spirited animal characters who deal with real-life scenarios in a relatable way...the books celebrate the very meaningful idea of friendship and what it means to forge positive relationships.” —Amy Poehler's Smart Girls “The series addresses bullying and empathy in an easy, accessible way, and the books are meant to be read aloud.” —New York Post “The Nocturnals is an enchanting story about a group of animals who band together to protect their friends and find adventure. The characters are delightful and the nighttime landscape is captivating. It was just as I expected—because the best stories always take place in the dark!” —R.L. Stine, author of Goosebumps “With numerous sequels already in the pipeline, Tracey Hecht's whimsical animal adventure is poised to deliver a raft of silliness, sweetness, and positive messages for years to come.” —Common Sense Media “This is an adventure worth reading, filled with excitement, danger, suspense and surprise. Each chapter begins with a small illustration and the language is clear and easy to understand.” —School Library Connection “A delightful adventure about the power of uncommon traits and the joys of newfound friendship.” —Kirkus Reviews “The characters are humorous and well developed, and the fast-moving plot features intrigue, unexpected twists, and the innovative hybrid hockey game. Accessible to upper elementary while sufficiently sophisticated for middle school, this new animal fantasy series should prove popular.” —Booklist “It’s the perfect reminder that some outside-of-the-curriculum learning can be some of the best ways to expand your imagination – and your world.” —Nate Berkus, award-winning interior designer and New York Times Bestselling author of The Things That Matter “Tracey Hecht’s first novel is an appealing page-turner for middle-school readers, combining a likable cadre of unusual animal characters with fast-paced, clever dialogue and, of course, plenty of suspense.” —BookPage About the Author Tracey Hecht is a writer and entrepreneur who created The Nocturnals, the critically acclaimed middle grade and early reader series. The American Booksellers Association chose her first book, The Nocturnals: The Mysterious Abductions, as a Kids’ Indie Next List pick. In addition, her Grow & Read early reader book, The Chestnut Challenge, was given a Mom’s Choice Gold Award. With the New York Public Library, she has also created a Read Aloud Writing Program that has since been conducted in over 150 schools, libra

How to Draw: Easy Techniques and Step-by-Step Drawings for Kids (Drawing for Kids Ages 9 to 12)

The Nocturnals The Mysterious Abductions The Noctu, is it available on Amazon?

Yes! But at Pricepulse we inform you when is the lowest price to buy the The Nocturnals The Mysterious Abductions The Noctu

Should I buy the The Nocturnals The Mysterious Abductions The Noctu now?

What is the current price of The Nocturnals The Mysterious Abductions The Noctu?

What was the lowest price for the The Nocturnals The Mysterious Abductions The Noctu?