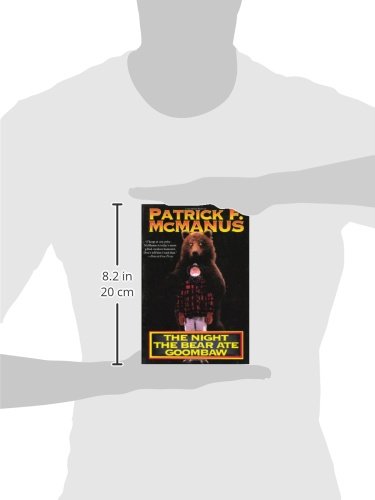 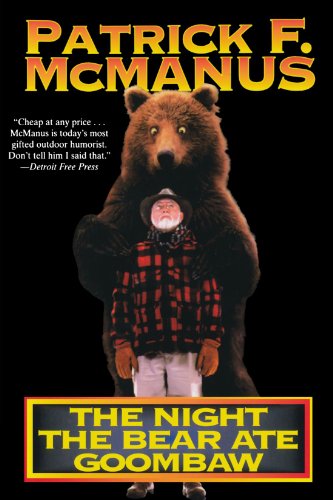 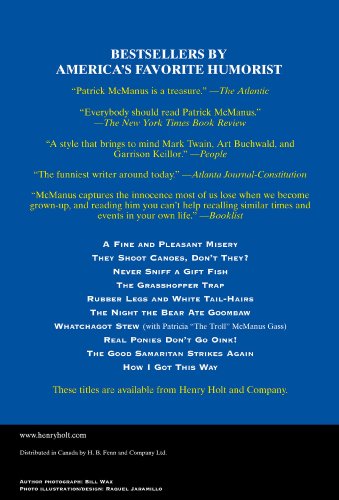 Product Description America’s “most gifted outdoor humorist” (Detroit Free Press) regales readers with this collection of gut-busting, man vs. nature tales originally published in such magazines as Field & Stream and Outdoor Living.Patrick F. McManus’s hilarious and comic stories of camping and other nature-oriented activities reach ridiculous proportions in The Night the Bear Ate Goombaw. From teaching his stepfather the methods of madness behind farm work through his best friend’s grandmother’s fear of bears, McManus reveals that human behavior is even wilder than the wilderness. Amazon.com Review The Night the Bear Ate Goombaw is a delightful treasury of McManus's favorite (mostly outdoor) adventures with friends. His stories explore the human capacity to laugh in the face of misfortune, such as "The Night the Bear Ate Goombaw" (Goombaw is Eddie Muldoon's grandmother) and "The Fried Flies, Please, and Easy on the Garlic," a story of dinner-party adversity: [CODE] "Martha starts. 'I do hope you won't take offense, Mr. McGinnis, but I view hunters as the lowest form of life, not excluding bacteria and algae.' 'No offense taken,' I reply, glad for an excuse to ignore my vichyssoise, which I view as the lowest form of food, not excluding lichens and boiled beets." [CODE] American humorist Patrick McManus could make being snagged by a fishhook funny, and in fact, he does. In his story "Getting It in the Ear," he writes, "One of the more interesting things that can happen to an angler is to get a barbed hook sunk into his hide. Such is the horror and fascination of the experience that many an angler has contemplated giving up his regular work and hitting the lecture circuit to entertain audiences around the nation with a dramatic rendering of his ordeal." After all, he argues, it's the misery endured that defines the sportsman, not the fish caught or the game shot. McManus's understated, matter-of-fact vignettes--infused with amusing glimpses of life's lesser-known eternal truths-- will make you laugh. Review “Patrick McManus is a treasure.” ―The Atlantic“Everybody should read Patrick McManus.” ―The New York Times Book Review“A style that brings to mind Mark Twain, Art Buchwald, and Garrison Keillor.” ―People“The funniest writer around today.” ―Atlanta Journal-Constitution“McManus captures the innocence most of us lose when we become grown-up, and reading him you can't help recalling similar times and events in your own life.” ―Booklist About the Author Patrick F. McManus (1933-2018) is the author of novels, plays, and more than a dozen collections of his humor columns from Outdoor Life and other magazines. There are nearly two million copies of his book in print, including his bestselling T he Shoot Canoes, Don't They?; The Night the Bear Ate Goombaw; and A Fine and Pleasant Misery.

The Night The Bear Ate Goombaw, is it available on Amazon?

Yes! But at Pricepulse we inform you when is the lowest price to buy the The Night The Bear Ate Goombaw

Should I buy the The Night The Bear Ate Goombaw now?

What is the current price of The Night The Bear Ate Goombaw?

What was the lowest price for the The Night The Bear Ate Goombaw?