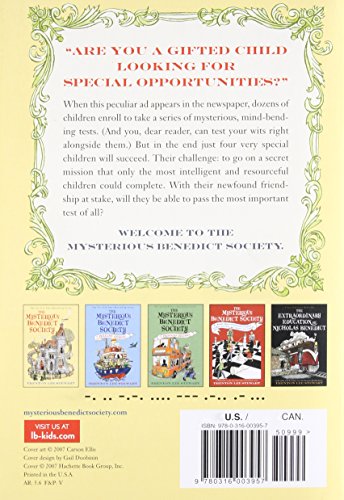 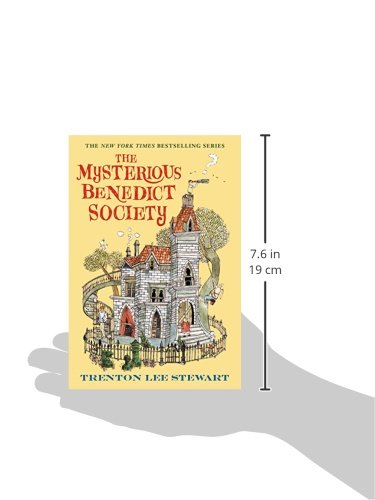 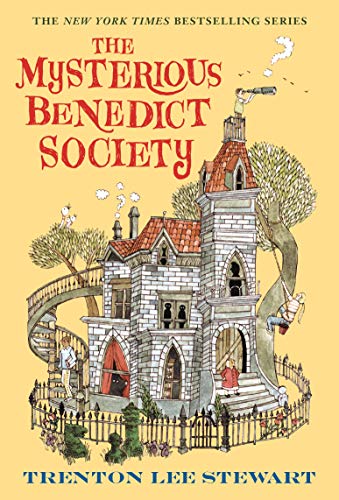 Product Description For fans of Lemony Snicket and Escape from Mr. Lemoncello's Library, this first book in the bestselling, award-winning Mysterious Benedict Society Series is not to be missed! "Are you a gifted child looking for special opportunities?" Dozens of children respond to this peculiar ad in the newspaper and are then put through a series of mind-bending tests, which readers take along with them. Only four children--two boys and two girls--succeed. Their challenge: to go on a secret mission that only the most intelligent and inventive children could complete. To accomplish it they will have to go undercover at the Learning Institute for the Very Enlightened, where the only rule is that there are no rules. But what they'll find in the hidden underground tunnels of the school is more than your average school supplies. So, if you're gifted, creative, or happen to know Morse Code, they could probably use your help. Review "Great cast of characters, lots of cool puzzles and mysteries. This book reminded me of some of the better children's books I grew up with, like Charlie and the Chocolate Factory and The Phantom Tollbooth."― Rick Riordan "Begins with a bang... resembles the otherwordly experience of Charlie and the Chocolate Factory."― Publishers Weekly, starred review "Fans of Roald Dahl or Blue Balliett will find a familiar blend of kid power, clues, and adventure."― School Library Journal, starred review "Tackles personal concerns: abandonment, family, loyalty, and facing one's fears."― Booklist, starred review "Dashes of mild humor and introspection rest on a solid base of suspense, mystery, and well-rounded characters, making this a satisfying dish for readers of varying tastes."― The Bulletin, starred review "Do not miss this one. Buy two copies because they will be needed."― VOYA "Real flashlight under the bedclothes material... this story flies past, thrilling us as it goes."― Horn Book About the Author Trenton Lee Stewart is the author of the award-winning, New York Times bestselling Mysterious Benedict Society series as well as Flood Summer, a novel for adults. He lives in Little Rock, Arkansas. Carson Ellis received her BFA from the University of Montana and has established a loyal following for her artistic collaborations with the band the Decemberists. She lives in Portland, Oregon.

Amazing
Great
Average
High
This is a great price to buy! There's a 81% probability this price will be higher. Our advise is Buy it now.
Buy on Amazon

Celebrate Your Body (and Its Changes, Too!): The Ultimate Puberty Book for Girls

Into the Pit (Five Nights at Freddy’s: Fazbear Frights #1)