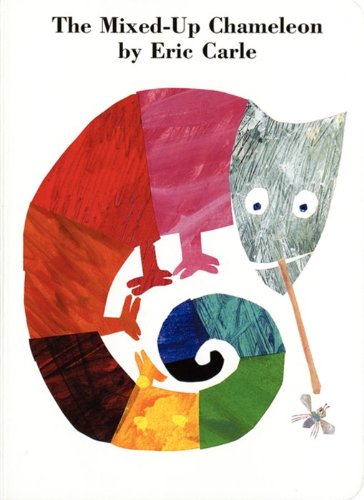 Product Description From Eric Carle, the New York Times bestselling author of The Very Hungry Caterpillar and The Grouchy Ladybug, comes a colorful and inventive book about a changing chameleon that wants to be a little bit of everything. There once was a small green chameleon that wished to be handsome like a flamingo, smart like a fox, and funny like a seal. But with each transformation in size, shape, and color, the chameleon learns that maybe being yourself is best of all! The Mixed-Up Chameleon is sure to delight little readers with its interactive art, funny antics, and heartwarming message. This board book edition is the perfect size for small hands and features sturdy pages. Other favorite classic books from Eric Carle include The Very Hungry Caterpillar, The Grouchy Ladybug, From Head to Toe, and many others. From the Back Cover The chameleon's life was not very exciting until the day it discovered it could change not only its color but its shape and size,too. When it saw the wonderful animals in the zoo, it immediately wanted to be like them -- and ended up likeall of them at once -- with hilarious results. About the Author Eric Carle was the creator of more than seventy picture books for young readers. Eric Carle was born in New York, USA. However, when he was just six, he moved with his parents to Germany. In 1952, after graduating from the prestigious Akademie der Bildenden Künste in Stuttgart, he fulfilled his dream of returning to New York. Eric Carle received many distinguished awards and honours for his work, including, in 2003, the Laura Ingalls Wilder Award for his lifetime contribution to children's literature and illustration. In 2002, fifty years after Carle's return to the United States, The Eric Carle Museum of Picture Book Art was opened in Amherst, Massachusetts. Here visitors of all ages can enjoy, in addition to Eric Carle's work, original artwork by other distinguished children's book illustrators from around the world.

Amazing
Great
Average
High
It's not a good time to buy now, there's a 61% probability this price will decrease. Our advice is to Watch it.
Buy on Amazon

The Mixed Up Chameleon Board Book, is it available on Amazon?

Yes! But at Pricepulse we inform you when is the lowest price to buy the The Mixed Up Chameleon Board Book

Should I buy the The Mixed Up Chameleon Board Book now?

It's not a good time to buy now, there's a 61% probability this price will decrease. Our advice is to Watch it.

What is the current price of The Mixed Up Chameleon Board Book?

What was the lowest price for the The Mixed Up Chameleon Board Book?