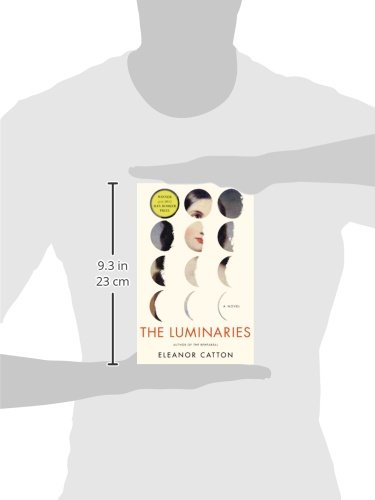 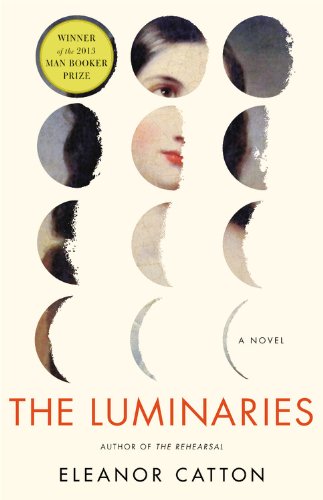 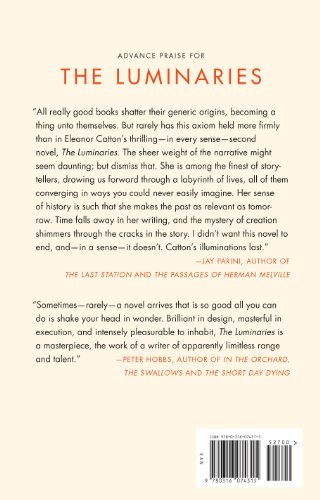 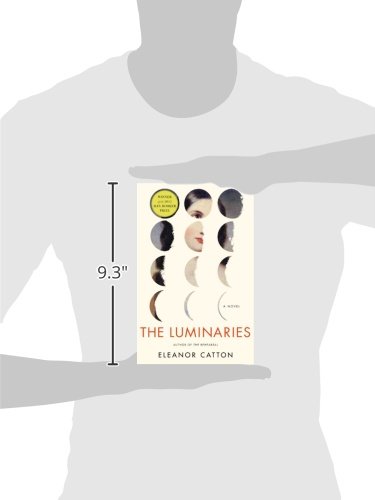 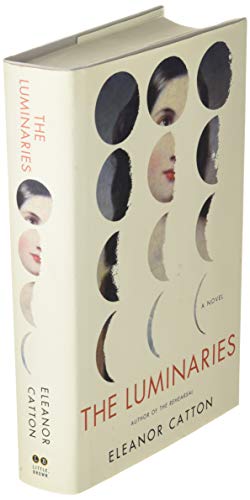 Product Description The bestselling, Man Booker Prize-winning novel hailed as "a true achievement. Catton has built a lively parody of a 19th-century novel, and in so doing created a novel for the 21st, something utterly new. The pages fly."-New York Times Book Review It is 1866, and Walter Moody has come to stake his claim in New Zealand's booming gold rush. On the stormy night of his arrival, he stumbles across a tense gathering of 12 local men who have met in secret to discuss a series of unexplained events: a wealthy man has vanished, a prostitute has tried to end her life, and an enormous cache of gold has been discovered in the home of a luckless drunk. Moody is soon drawn into a network of fates and fortunes that is as complex and exquisitely ornate as the night sky. Richly evoking a mid-nineteenth-century world of shipping, banking, and gold rush boom and bust, The Luminaries is at once a fiendishly clever ghost story, a gripping page-turner, and a thrilling novelistic achievement. It richly confirms that Eleanor Catton is one of the brightest stars in the international literary firmament. Review " The Luminaries is a true achievement. Catton has built a lively parody of a 19th-century novel, and in so doing created a novel for the 21st, something utterly new. The pages fly." -- Bill Roorbach, New York Times Book Review "A finely wrought fun house of a novel. Enjoy the ride."- Chris Bohjalian, The Washington Post "An 848-page dish so fresh that one continues to gorge, long past being crammed full of goodness. Nearly impossible to put down, it's easily the best novel I've read this year." - Mike Fischer, The Milwaukee Journal Sentinel "Go ahead and call Eleanor Catton a prodigy. At 28, she's the youngest author ever to win Britain's prestigious Man Booker Prize for THE LUMINAIRES, which warrants every one of its imposing - yet surprisingly breezy - 848 pages." Stephan Lee, Entertainment Weekly "The type of novel that you will devour only to discover that you can't find anything of equal scope and excitement to read once you have finished...Do yourself a favour and read The Luminaries." -- The Independent "Irresistible, masterful, compelling... The Luminaries has a gripping plot that is cleverly unravelled to its satisfying conclusion, a narrative that from the first page asserts that it is firmly in control of where it is taking us...[Catton is] a mistress of plot and pacing." - The Telegraph (5-star review) "Every sentence of this intriguing tale set on the wild west coast of southern New Zealand during the time of its goldrush is expertly written, every cliffhanger chapter-ending making us beg for the next to begin." - The Guardian "Note-perfect... [Catton's] authority and verve are so impressive that she can seemingly take us anywhere; each time, we trust her to lead us back...A remarkable accomplishment." - Globe and Mail "Beautifully rendered...Momentous. An exquisite world unto itself." - Maclean's "A remarkable achievement...Intricate, painstakingly detailed and deliciously readable...A novel that can be enjoyed for its engrossing entirety, as well as for the literary gems bestowed on virtually every page." - Quill & Quire (starred review) "As beautiful as it is triumphant." - Daily Mail "Falling in love with a fictional person is one of the greatest pleasures in life, Canadian-born writer Eleanor Catton believes. By the time readers have finished The Luminaries, they will have been enchanted by many of her characters, as they slowly reveal themselves through the novel's intriguing web of interactions and relationships." - Toronto Star To call it "daringly ambitious in its reach and scope doesn't really do it justice... There is a ludic quality in all this that is infectious: You pick up the author's joy in her enterprise." -Martin Rubin, The Wall Street Journal "Several of the characters... are moving and even heartbreaking." She continues, "There will no doubt be rea

Amazing
Great
Average
High
Although this is an Average price, there's a 68% probability this price will be lower. If you can wait, our advice is to Watch it.
Buy on Amazon

The Luminaries A Novel Man Booker Prize, is it available on Amazon?

Yes! But at Pricepulse we inform you when is the lowest price to buy the The Luminaries A Novel Man Booker Prize

Should I buy the The Luminaries A Novel Man Booker Prize now?

Although this is an Average price, there's a 68% probability this price will be lower. If you can wait, our advice is to Watch it.

What is the current price of The Luminaries A Novel Man Booker Prize?

What was the lowest price for the The Luminaries A Novel Man Booker Prize?