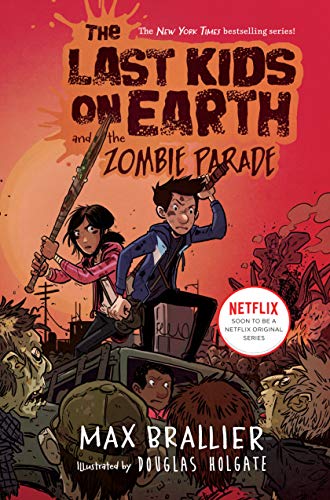 Product Description A Netflix Original series!The New York Times and USA Today bestelling series, with over 5 million copies in print!"Terrifyingly fun! Delivers big thrills and even bigger laughs."--Jeff Kinney, author of the #1 New York Times bestseller Diary of a Wimpy Kid   The zombies are disappearing. This might seem like a good thing, since zombies eat your brains, but normal human kid Jack Sullivan is suspicious. He keeps hearing an eerie shrieking noise that seems to be almost summoning the zombies—but to where, and for what (probably) foul purpose?   Jack, his three best friends (maybe the only people left on Earth), and their pet monster Rover need to get to the bottom of this. Along the way they encounter a lot more than they bargained for, including a giant Wormungulous, a pizza parlor monster hangout, an ancient evil who destroys worlds, and a stereo system that is totally the bomb. Can Jack figure out why the zombies are vanishing . . . before he and his friends are next? From School Library Journal Gr 3–6—Readers met 13-year-old abandoned foster kid-turned-monster slayer Jack Sullivan and his adolescent makeshift army in The Last Kids on Earth. In this excellent sequel, the zombies are mysteriously disappearing. As the zombies walk in droves toward a shrieking sound, their brains are being sucked out of their skulls. While no fan of the undead, Jack and his squad set out to solve the mystery. New alliances are formed and trusts are broken, culminating in an all-out monster brawl to save their world. The continuation of this hybrid series capitalizes on gross-out fun. The realistic writing style keeps the narrative moving at a fast pace, while the frenzied pencil artwork supports its humorous tone. But what distinguishes this adventure is the character development. The members work through their fears of loss, abandonment, and loneliness to unite as a family. The language is sophisticated, geared toward readers who enjoy rousing adventures. The open ended conclusion allows for the possibility of more exciting exploits. A gallery highlighting various nefarious creatures is an added treat. VERDICT For fans of the first book, this sequel does not disappoint. This series is a must-have for middle grade collections.—Sada Mozer, Los Angeles Public Library Review A New York Times bestseller "This series is a must-have for middle grade collections."-- School Library Journal "The likable cast, lots of adventure, and gooey, oozy monster slime galore keep the pages turning."-- Booklist "Jack's witty narration and Holgate's pitch-perfect illustrations make for a terrific read that's particularly well suited for middle-grade boys who might otherwise be reluctant to pick up a book. . . . An apocalyptic adventure with a whole lot of heart."-- Kirkus Reviews Acclaim for The Last Kids on Earth: "Terrifyingly fun! Max Brallier's  The Last Kids on Earth delivers big thrills and even bigger laughs."-- Jeff Kinney, author of the #1 New York Times bestseller Diary of a Wimpy Kid * "Middle-grade readers, particularly boys, will find Jack’s pitch-perfect mix of humor, bravado, and self-professed geekiness impossible to resist. . . . The marriage of text and illustration serves as a  perfect example of what an illustrated novel can and should be."-- Kirkus Reviews,  starred review * "Terrifically funny  . . . Snarky end-of-the-world fun."-- Publishers Weekly,  starred review* "This book provides loads of laughs. . . . A gross-out good time with surprisingly nuanced character development."-- School Library Journal,  starred review About the Author Max Brallier is a  New York Times,  USA Today, and  Wall Street Journal bestselling author. His books and series include The Last Kids on Earth, Eerie Elementary, Mister Shivers, Galactic Hot Dogs, and Can YOU Survive the Zombie Apocalypse? He is a writer and producer for Netflix’s Emmy-award-winning adaptation of The Last Kids on Earth. Max lives in Los Angeles with hi

Current price$8.89
Since 3 months
Average price$10.17
Based on 4 years
Lowest price ever$4.55
2 years ago
Highest price ever$13.22
23 months ago
Amazing
Great
Average
High
This is a great price to buy! There's a 63% probability this price will be higher. Our advise is Buy it now.
Buy on Amazon

Trees, Leaves, Flowers and Seeds: A Visual Encyclopedia of the Plant Kingdom (Smithsonian)

If I Ran the Horse Show: All About Horses (Cat in the Hat's Learning Library)

The Princess in Black and the Mysterious Playdate

The Last Kids On Earth And The Zombie Parade, is it available on Amazon?

Yes! But at Pricepulse we inform you when is the lowest price to buy the The Last Kids On Earth And The Zombie Parade

Should I buy the The Last Kids On Earth And The Zombie Parade now?

This is a great price to buy! There's a 63% probability this price will be higher. Our advise is Buy it now.

What is the current price of The Last Kids On Earth And The Zombie Parade?

What was the lowest price for the The Last Kids On Earth And The Zombie Parade?