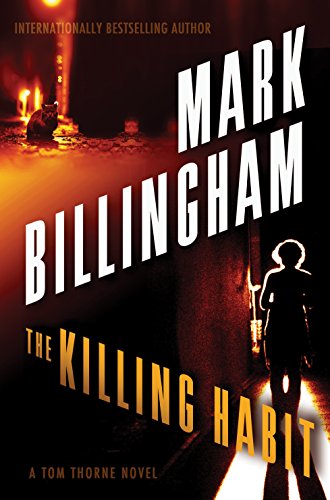 Product Description From “one of the most consistently entertaining, insightful crime writers working today” (Gillian Flynn), The Killing Habit again brings together favorite wild-card detective Tom Thorne and straight-laced DI Nicola Tanner on a pair of lethally high-stakes cases. While DI Nicola Tanner investigates the deadly spread of a dangerous new drug, Tom Thorne is handed a case that he doesn’t take too seriously, until a spate of animal killings points to the work of a serial killer. When the two cases come together in a way that neither could have foreseen, both Thorne and Tanner must risk everything to catch two very different killers. Review Praise for The Killing Habit: "Another compulsively readable blend of satire, crime fiction motifs, and the occasional quirky, violent interlude in a tale that will satisfy [Billingham's] current fans and attract new ones.” ―Booklist "As ever with Billingham, a rich cast of characters and tense situations are marshalled with panache, leading to a final terrifying encounter." ―Barry Forshaw, Financial Times "[ The Killing Habit] shows why Billingham stands at the forefront of British crime authors." ―Publishers Weekly "Mark Billingham has provided us with yet another temptation for a one-sit reading...If you’re not already on board Billingham’s (almost) annual visit to Thorne’s world, you should jump on now." ―Bookreporter "This is the 15th novel featuring Thorne, and neither he nor Billingham show signs of fatigue. One of the great series of British crime fiction continues." ―The Times (London) Praise for Mark Billingham and the Tom Thorne series: “Morse, Rebus, and now Thorne. The next superstar detective is already with us―don’t miss him.”―Lee Child “Billingham is a world-class writer and Tom Thorne is a wonderful creation. Rush to read these books.”―Karin Slaughter “With each of his books, Mark Billingham gets better and better. These are stories and characters you don’t want to leave.”―Michael Connelly “Mark Billingham has brought a rare and welcome blend of humanity, dimension, and excitement to the genre.”―George Pelecanos About the Author Mark Billingham has twice won the Theakston Old Peculier Award for Best Crime Novel and also won the Sherlock Award for "Best Detective Created by a British Author." His books, which include the critically acclaimed Tom Thorne series, have been translated into twenty-five languages and have sold over five million copies. He lives in London. Excerpt. © Reprinted by permission. All rights reserved. He was always amazed at how easy it was. Part of that was down to him of course, and it was no more than common sense; the thorough preparations, the thought he put into it. The care taken each and every time and the refusal to get lazy. Victims had never been hard to find, quite the opposite, but still, each night’s work needed to be treated with caution. Best laid plans and all that. He was no expert when it came to forensics, but he knew enough to avoid leaving any sorts of traces. The gloves were thicker than he would have liked, but that couldn’t be helped. It took away some of the feeling at the end, which was a shame, but he wasn’t going to risk getting scratched, was he? Enough feeling, though. There was always enough, and each time he could feel things starting to . . . even out inside him. A lifting, of sorts. Funny old word, but it felt right.

The Killing Habit A Tom Thorne Novel Di Tom Thorne, is it available on Amazon?

Yes! But at Pricepulse we inform you when is the lowest price to buy the The Killing Habit A Tom Thorne Novel Di Tom Thorne

Should I buy the The Killing Habit A Tom Thorne Novel Di Tom Thorne now?

What is the current price of The Killing Habit A Tom Thorne Novel Di Tom Thorne?

What was the lowest price for the The Killing Habit A Tom Thorne Novel Di Tom Thorne?