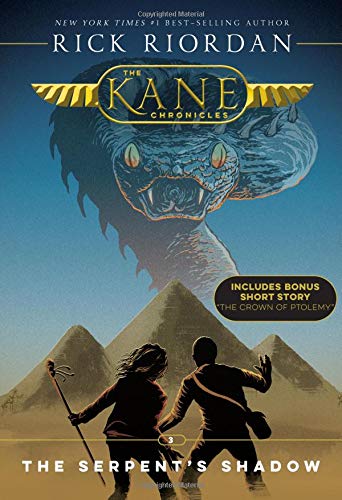 Product Description If you haven't yet read the Kane Chronicles, Rick Riordan's action-adventure trilogy based on Ancient Egyptian mythology, don't miss this paperback edition with new cover art and a Percy Jackson-Kane Chronicles crossover story, "The Crown of Ptolemy." When young magicians Carter and Sadie Kane learned how to follow the path of the Ancient Egyptian gods, they knew they would have to play an important role in restoring Ma'at--order--to the world. What they didn't know is how chaotic the world would become. The Chaos snake Apophis is loose and threatening to destroy the earth in three days' time. The magicians are divided. The gods are disappearing, and those who remain are weak. Walt, one of Carter and Sadie's most gifted initiates, is doomed and can already feel his life force ebbing. Zia is too busy babysitting the senile sun god, Ra, to be of much help. What are a couple of teenagers and a handful of young trainees to do? There is possibly one way to stop Apophis, but it is so difficult that it might cost Carter and Sadie their lives, if it even works at all. It involves trusting the ghost of a psychopathic magician not to betray them, or worse, kill them. They'd have to be crazy to try it. Well, call them crazy. With hilarious asides, memorable monsters, and an ever-changing crew of friends and foes, the excitement never lets up in The Serpent's Shadow, a thoroughly entertaining and satisfying conclusion to the Kane Chronicles. About the Author Rick Riordan, dubbed "storyteller of the gods" by Publishers Weekly, is the author of five #1 New York Times best-selling middle grade series with millions of copies sold throughout the world: Percy Jackson and the Olympians, The Heroes of Olympus, and the Trials of Apollo, based on Greek and Roman mythology; the Kane Chronicles, based on Ancient Egyptian mythology; and Magnus Chase and the Gods of Asgard, based on Norse mythology. Rick collaborated with illustrator John Rocco on two #1 New York Times best-selling collections of Greek myths for the whole family: Percy Jackson's Greek Gods and Percy Jackson's Greek Heroes. Rick is also the publisher of an imprint at Disney-Hyperion, Rick Riordan Presents, dedicated to finding other authors of highly entertaining fiction based on world cultures and mythologies. He lives in Boston, Massachusetts with his wife and two sons. Follow him on Twitter at @camphalfblood.
Amazing
Great
Average
High
This is absolutely the best time to buy. Don’t miss out, there's 67% probability of this price being higher soon. Buy now.
Buy on Amazon

The Throne of Fire (The Kane Chronicles, Book 2)

Magnus Chase and the Gods of Asgard, Book 3 The Ship of the Dead

The Throne of Fire (The Kane Chronicles, Book 2)

Magnus Chase and the Gods of Asgard, Book 3 The Ship of the Dead

The lowest historical price was $3.82