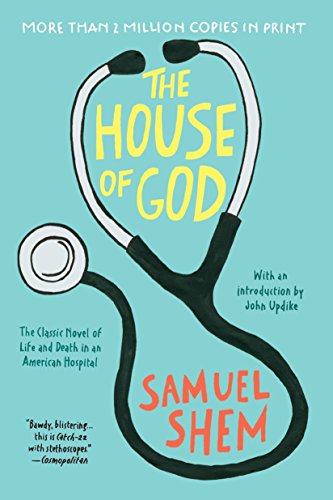 Product Description By turns heartbreaking, hilarious, and utterly human, The House of God is a mesmerizing and provocative novel about what it really takes to become a doctor. “The raunchy, troubling, and hilarious novel that turned into a cult phenomenon. Singularly compelling…brutally honest.”—The New York Times Struggling with grueling hours and sudden life-and-death responsibilities, Basch and his colleagues, under the leadership of their rule-breaking senior resident known only as the Fat Man, must learn not only how to be fine doctors but, eventually, good human beings. A phenomenon ever since it was published, The House of God was the first unvarnished, unglorified, and uncensored portrait of what training to become a doctor is truly like, in all its terror, exhaustion and black comedy. With more than two million copies sold worldwide, it has been hailed as one of the most important medical novels ever written. With an introduction by John Updike Review Praise for The House of God “The raunchy, troubling, and hilarious novel that turned into a cult phenomenon. Singularly compelling...brutally honest.”—The New York Times “Bawdy, blistering...this is Catch-22 with stethoscopes.”—Cosmopolitan “Wonderfully wild, ribald, erotic, bitter, compassionate...in the same spirit as Catch-22.”—The Seattle Times “A wildly funny, sad, laugh-out-loud, frightening, outrageous, thought-provoking, moving book…a story of modern medicine rarely, if ever, told.”—The Houston Chronicle “Does for the practice of medicine what Catch-22 and M*A*S*H did for the practice of warfare.”—The Newark Star-Ledger “Mordantly funny, brilliantly ironic...A writer of outstanding substance and style.”—Publishers Weekly (starred review) From the Back Cover Now a classic! The hilarious novel of the healing arts that reveals everything your doctor never wanted you to know. Six eager interns -- they saw themselves as modern saviors-to-be. They came from the top of their medical school class to the bottom of the hospital staff to serve a year in the time-honored tradition, racing to answer the flash of on-duty call lights and nubile nurses. But only the Fat Man --the Clam, all-knowing resident -- could sustain them in their struggle to survive, to stay sane, to love-and even to be doctors when their harrowing year was done. About the Author Samuel Shem is a novelist, playwright, and, for three decades, a member of the Harvard Medical School faculty. His novels include The House of God, Mount Misery, and Fine. He is coauthor with his wife, Janet Surrey, of the hit Off-Broadway play Bill W. and Dr. Bob, the story of the founding of Alcoholics Anonymous (winner of the 2007 Performing Arts Award of the National Council on Alcoholism and Drug Dependence), and We Have to Talk: Healing Dialogues Between Men and Women.

The House Of God, is it available on Amazon?

Yes! But at Pricepulse we inform you when is the lowest price to buy the The House Of God

Should I buy the The House Of God now?

What is the current price of The House Of God?

What was the lowest price for the The House Of God?