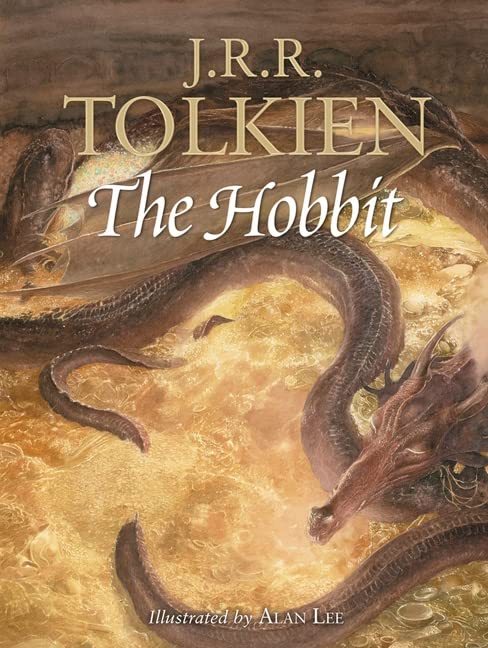 About the Author J.R.R. TOLKIEN (1892–1973) is the creator of Middle-earth and author of such classic and extraordinary works of fiction as The Hobbit, The Lord of the Rings, and The Silmarillion. His books have been translated into more than fifty languages and have sold many millions of copies worldwide. Product Description This lavish gift edition of J.R.R. Tolkien's classic features cover art, illustrations, and watercolor paintings by the artist Alan Lee. Bilbo Baggins is a hobbit who enjoys a comfortable, unambitious life, rarely traveling any farther than his pantry or cellar. But his contentment is disturbed when the wizard Gandalf and a company of dwarves arrive on his doorstep one day to whisk him away on an adventure. They have launched a plot to raid the treasure hoard guarded by Smaug the Magnificent, a large and very dangerous dragon. Bilbo reluctantly joins their quest, unaware that on his journey to the Lonely Mountain he will encounter both a magic ring and a frightening creature known as Gollum.  Written for J.R.R. Tolkien's own children, The Hobbit has sold many millions of copies worldwide and established itself as a modern classic. Review "All those, young or old, who love a finely imagined story, beautifully told, will take The Hobbit to their hearts." Horn Book Guide"A flawless masterpiece." The Times of London — From the Back Cover Whisked away from his comfortable, unambitious life in his hobbit-hole in Bag End by Gandalf the wizard and a company of dwarves, Bilbo Baggins finds himself caught up in a plot to raid the treasure hoard of Smaug the Magnificent, a large and very dangerous dragon. Although quite reluctant to take part in this quest, Bilbo surprises even himself by his resourcefulness and his skill as a burglar! Written for J.R.R. Tolkien's own children, The Hobbit met with instant success when published in 1937. Now, in 1997, this special new edition, illustrated by Alan Lee, commemorates the sixtieth anniversary of a great classic. Excerpt. © Reprinted by permission. All rights reserved. Chapter IAN UNEXPECTED PARTYIN A HOLE IN THE GROUND there lived a hobbit. Not a nasty, dirty, wet hole, filled with the ends of worms and an oozy smell, nor yet a dry, bare, sandy hole with nothing in it to sit down on or to eat: it was a hobbit-hole, and that means comfort. It had a perfectly round door like a porthole, painted green, with a shiny yellow brass knob in the exact middle. The door opened on to a tube-shaped hall like a tunnel: a very comfortable tunnel without smoke, with panelled walls, and floors tiled and carpeted, provided with polished chairs, and lots and lots of pegs for hats and coats—the hobbit was fond of visitors. The tunnel wound on and on, going fairly but not quite straight into the side of the hill—The Hill, as all the people for many miles round called it—and many little round doors opened out of it, first on one side and then on another. No going upstairs for the hobbit: bedrooms, bathrooms, cellars, pantries (lots of these), wardrobes (he had whole rooms devoted to clothes), kitchens, dining-rooms, all were on the same floor, and indeed on the same passage. The best rooms were all on the left-hand side (going in), for these were the only ones to have windows, deep-set round windows looking over his garden, and meadows beyond, sloping down to the river. This hobbit was a very well-to-do hobbit, and his name was Baggins. The Bagginses had lived in the neighbourhood of The Hill for time out of mind, and people considered them very respectable, not only because most of them were rich, but also because they never had any adventures or did anything unexpected: you could tell what a Baggins would say on any question without the bother of asking him. This is a story of how a Baggins had an adventure, and found himself doing and saying things altogether unexpected. He may have lost the neighbours' respect, but he gained—well, you will se

The Hobbit, is it available on Amazon?

Yes! But at Pricepulse we inform you when is the lowest price to buy the The Hobbit

Should I buy the The Hobbit now?

What is the current price of The Hobbit?

What was the lowest price for the The Hobbit?