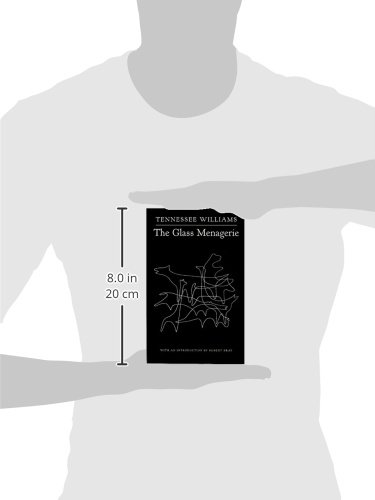 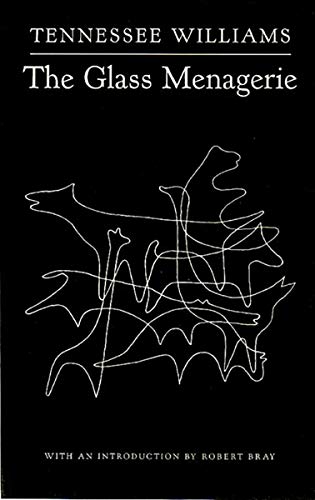 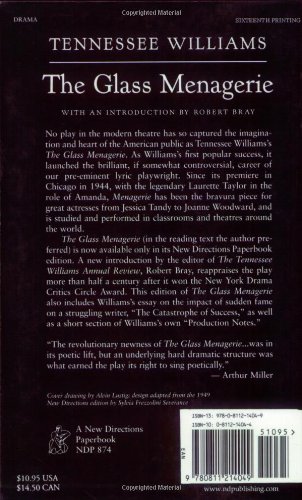 Product Description No play in the modern theatre has so captured the imagination and heart of the American public as Tennessee Williams's The Glass Menagerie.Menagerie was Williams's first popular success and launched the brilliant, if somewhat controversial, career of our pre-eminent lyric playwright. Since its premiere in Chicago in 1944, with the legendary Laurette Taylor in the role of Amanda, the play has been the bravura piece for great actresses from Jessica Tandy to Joanne Woodward, and is studied and performed in classrooms and theatres around the world. The Glass Menagerie (in the reading text the author preferred) is now available only in its New Directions Paperbook edition. A new introduction by prominent Williams scholar Robert Bray, editor of The Tennessee Williams Annual Review, reappraises the play more than half a century after it won the New York Drama Critics Circle Award: "More than fifty years after telling his story of a family whose lives form a triangle of quiet desperation, Williams's mellifluous voice still resonates deeply and universally." This edition of The Glass Menagerie also includes Williams's essay on the impact of sudden fame on a struggling writer, "The Catastrophe of Success," as well as a short section of Williams's own "Production Notes." The cover features the classic line drawing by Alvin Lustig, originally done for the 1949 New Directions edition. Review “The revolutionary newness of The Glass Menagerie . . . was in its poetic lift, but an underlying hard dramatic structure was what earned the play its right to sing poetically.” - Arthur Miller“With the advent of The Glass Menagerie . . . Tennessee Williams emerged as a poet-playwright and a unique new force in theatre throughout the world.” - Lyle Leverich in Tom: The Unknown Tennessee Williams About the Author Tennessee Williams (1911-1983) is the acclaimed author of many books of letters, short stories, poems, essays, and a large collection of plays, including The Glass Menagerie, A Streetcar Named Desire, Camino Real,Cat on a Hot Tin Roof, Orpheus Descending, The Night of the Iguana, and The Rose Tattoo.Robert Bray is an author, editor, and Tennessee Williams scholar.

The Glass Menagerie, is it available on Amazon?

Yes! But at Pricepulse we inform you when is the lowest price to buy the The Glass Menagerie

Should I buy the The Glass Menagerie now?

What is the current price of The Glass Menagerie?

What was the lowest price for the The Glass Menagerie?