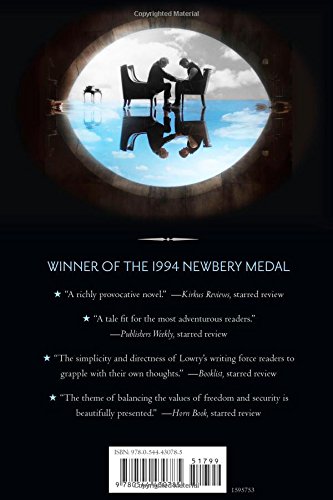 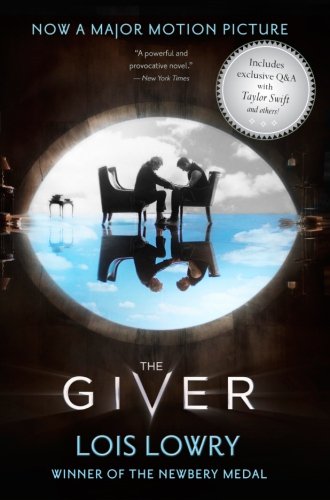 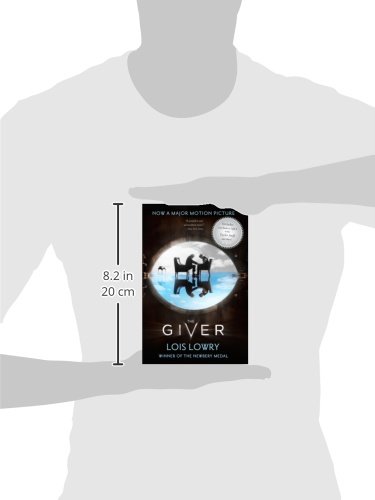 Product Description The Giver, the 1994 Newbery Medal winner, has become one of the most influential novels of our time. The haunting story centers on twelve-year-old Jonas, who lives in a seemingly ideal, if colorless, world of conformity and contentment. Not until he is given his life assignment as the Receiver of Memory does he begin to understand the dark, complex secrets behind his fragile community. This movie tie-in edition features cover art from the movie and exclusive Q&A with members of the cast, including Taylor Swift, Brenton Thwaites and Cameron Monaghan. Review “A powerful and provocative novel”—The New York Times   “Wrought with admirable skill -- the emptiness and menace underlying this Utopia emerge step by inexorable step: a richly provocative novel.”—Kirkus, starred review “Lowry is once again in top form raising many questions while answering few, and unwinding a tale fit for the most adventurous readers.”—Publishers Weekly, starred review   “The simplicity and directness of Lowry's writing force readers to grapple with their own thoughts.”— Booklist, starred review   “The theme of balancing the values of freedom and security is beautifully presented.”— The Horn Book Magazine, starred review About the Author Lois Lowry is the author of more than forty books for children and young adults, including the New York Times bestselling Giver Quartet and popular Anastasia Krupnik series. She has received countless honors, among them the Boston Globe-Horn Book Award, the Dorothy Canfield Fisher Award, the California Young Reader’s Medal, and the Mark Twain Award. She received Newbery Medals for two of her novels, Number the Stars and The Giver. Her first novel, A Summer to Die, was awarded the International Reading Association’s Children’s Book Award. Ms. Lowry lives in Maine. www.  Twitter @LoisLowryWriter Excerpt. © Reprinted by permission. All rights reserved. 1It was almost December, and Jonas was beginning to be frightened. No. Wrong word, Jonas thought. Frightened meant that deep, sickening feeling of something terrible about to happen. Frightened was the way he had felt a year ago when an unidentified aircraft had overflown the community twice. He had seen it both times. Squinting toward the sky, he had seen the sleek jet, almost a blur at its high speed, go past, and a second later heard the blast of sound that followed. Then one more time, a moment later, from the opposite direction, the same plane. At first, he had been only fascinated. He had never seen aircraft so close, for it was against the rules for Pilots to fly over the community. Occasionally, when supplies were delivered by cargo planes to the landing field across the river, the children rode their bicycles to the riverbank and watched, intrigued, the unloading and then the takeoff directed to the west, always away from the community. But the aircraft a year ago had been different. It was not a squat, fat-bellied cargo plane but a needle-nosed single-pilot jet. Jonas, looking around anxiously, had seen others—adults as well as children—stop what they were doing and wait, confused, for an explanation of the frightening event. Then all of the citizens had been ordered to go into the nearest building and stay there. IMMEDIATELY, the rasping voice through the speakers had said. LEAVE YOUR BICYCLES WHERE THEY ARE. Instantly, obediently, Jonas had dropped his bike on its side on the path behind his family’s dwelling. He had run indoors and stayed there, alone. His parents were both at work, and his little sister, Lily, was at the Childcare Center where she spent her after-school hours. Looking through the front window, he had seen no people: none of the busy afternoon crew of Street Cleaners, Landscape Workers, and Food Delivery people who usually populated the community at that time of day. He saw only the abandoned bikes here and there on their sides; an upturned wheel on one was still revolving slowly. He had been frightened then.

Current price$4.99
Since 51 days
Average price$7.88
Based on 6 years
Lowest price ever$4.99
51 days ago
Highest price ever$9.99
3 months ago
Amazing
Great
Average
High
This is absolutely the best time to buy. Don’t miss out, there's 93% probability of this price being higher soon. Buy now.
Buy on Amazon

The Wonky Donkey: A Board Book

Guess How Much I Love You

The Giver Movie Tie In Edition 1 Giver Quartet, is it available on Amazon?

Yes! But at Pricepulse we inform you when is the lowest price to buy the The Giver Movie Tie In Edition 1 Giver Quartet

Should I buy the The Giver Movie Tie In Edition 1 Giver Quartet now?

What is the current price of The Giver Movie Tie In Edition 1 Giver Quartet?

What was the lowest price for the The Giver Movie Tie In Edition 1 Giver Quartet?