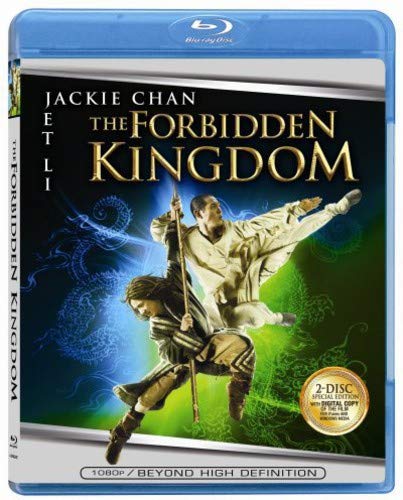 Product Description Individually, they've starred in the most adrenaline-pumping martial-arts adventures ever. Together for the first time, Jet Li and Jackie Chan join forces to create the greates epic of them all- THE FORBIDDEN KINGDOM. As ancient Chinese warriors, they must train and mentor a 21st century kung-fu fanatic who's been summoned to fight a centuries-old battle and free the imprisoned Monkey King. If you're a fighting fan, the wait is over. The team is ready. The Kingdom has arrived. Amazon.com Getting martial-arts superstars Jet Li and Jackie Chan together in the same action film is like a fantasy come true, even if The Forbidden Kingdom is more of a children's movie than an instant kung-fu classic. Yes, Li and Chan square off in a lengthy, acrobatic fight scene that is a lot of fun, though it can't be what such a scene might have been even a decade ago: careful editing now compensates for the 54-year-old Chan's slower moves and reflexes. Still, Chan doesn't disappoint as Lu Yan, a drunken immortal in ancient China who mentors a modern-day American kid, Jason (Michael Angarano), the latter having slipped into the past while in possession of a magical staff that belongs to the imprisoned Monkey King (Li). In order to get back to his own time and help an old friend (also Chan) wounded by thugs, Jason accompanies Lu Yan and a lovely warrior, Golden Sparrow (Liu Yifei), on a journey to return the staff. Along the way, a (mostly) silent monk (Li, again), who has spent his life in search of the staff, joins their mission. He helps Lu Yan train Jason in fighting and adding more muscle to the party as it comes under siege from a violent witch (Li Bing Bing) and pathological warlord (Collin Chou). Screenwriter John Fusco (Hidalgo) and director Rob Minkoff (The Haunted Mansion) have made a slightly chintzy, Western version of a Chinese swords-and-sorcery tale. The gravity-defying, flying-through-the-air-while-fighting choreography looks pretty choppy and graceless compared to, say, the martial arts films of Zhang Yimou. But The Forbidden Kingdom is really aimed at kids, not aficionados of epic fight movies. On that score, the movie aims to please and does so for the right audience. -- Tom Keogh

The Forbidden Kingdom Blu Ray, is it available on Amazon?

Yes! But at Pricepulse we inform you when is the lowest price to buy the The Forbidden Kingdom Blu Ray

Should I buy the The Forbidden Kingdom Blu Ray now?

What is the current price of The Forbidden Kingdom Blu Ray?

What was the lowest price for the The Forbidden Kingdom Blu Ray?