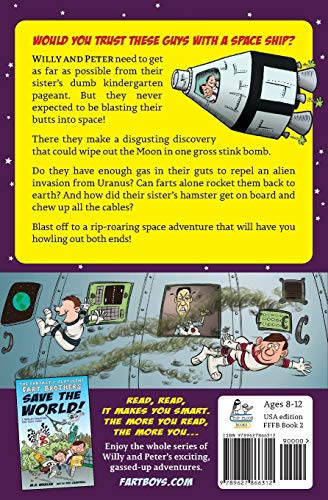 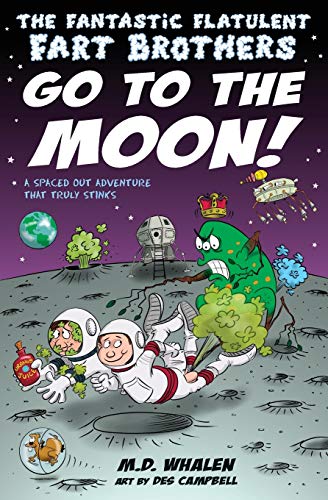 Product Description Can these two gas-tronauts save the universe’s butt? Willy and Peter need to get as far as possible from their sister’s dumb kindergarten pageant. But they never expected to blast their butts into space! There they make a disgusting discovery that could wipe out the Moon in one gross stink bomb. Do they have enough gas in their guts to repel gassy green aliens from Uranus? Can farts alone rocket them back to earth? And how did their sister’s hamster get into the space capsule and chew up all the wires? It’s the second exciting volume in the butt-blasting new adventure series for kids. With hilarious pictures and action-packed text, even the most reluctant readers will howl out both ends! Ages 9-12. Get a whiff of Chapter 1 in the preview. Please note that this is the American-spelling edition. About the Author He was always the kid who sat in the back of the class scribbling stories and cartoons. Later he sat in front of the class scribbling stories, when he should have been teaching! Now he writes full time in the back of his house, and has published many books under other names. He also enjoys cycling, world travel, and making rude noises in different languages.

Disney Maps: A Magical Atlas of the Movies We Know and Love

The Fantastic Flatulent Fart Brothers Go To The Mo, is it available on Amazon?

Yes! But at Pricepulse we inform you when is the lowest price to buy the The Fantastic Flatulent Fart Brothers Go To The Mo

Should I buy the The Fantastic Flatulent Fart Brothers Go To The Mo now?

What is the current price of The Fantastic Flatulent Fart Brothers Go To The Mo?

What was the lowest price for the The Fantastic Flatulent Fart Brothers Go To The Mo?