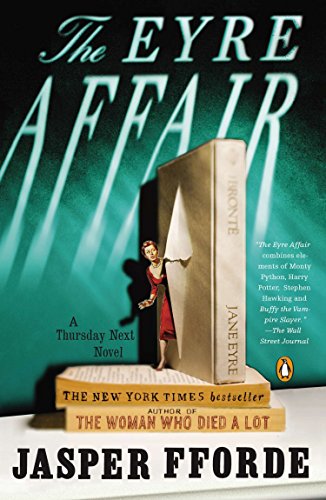 Product Description Meet Thursday Next, literary detective without equal, fear or boyfriendJasper Fforde’s beloved New York Times bestselling novel introduces literary detective Thursday Next and her alternate reality of literature-obsessed England—from the author of The Constant Rabbit Fans of Douglas Adams and P. G. Wodehouse will love visiting Jasper Fforde's Great Britain, circa 1985, when time travel is routine, cloning is a reality (dodos are the resurrected pet of choice), and literature is taken very, very seriously: it’s a bibliophile’s dream. England is a virtual police state where an aunt can get lost (literally) in a Wordsworth poem and forging Byronic verse is a punishable offense. All this is business as usual for Thursday Next, renowned Special Operative in literary detection. But when someone begins kidnapping characters from works of literature and plucks Jane Eyre from the pages of Brontë's novel, Thursday is faced with the challenge of her career. Fforde's ingenious fantasy—enhanced by a Web site that re-creates the world of the novel—unites intrigue with English literature in a delightfully witty mix. From The New Yorker It's 1985 in England, at least on the calendar; the Crimean War is in its hundred-and-thirty-first year; time travel is nothing new; Japanese tourists slip in and out of Victorian novels; and the literary branch of the special police, led gamely by the beguiling Thursday Next, are pursuing Acheron Hades, who has stolen the manuscript of "Martin Chuzzlewit" and set his sights on kidnapping the character Jane Eyre, a theft that could have disastrous consequences for Brontë lovers who like their story straight. This rambunctious caper could be taken as a warning about what might happen if society considered literature really important—like, say, energy futures or accounting. Copyright © 2005 The New Yorker Review “Neatly delivers alternate history, Monty Pythonesque comedy skits, Grand Guignol supervillains, thwarted lovers, po-mo intertextuality, political commentary, time travel, vampires, absent-minded inventors, a hard-boiled narrator, and lots, lots more. . . . Suspend your disbelief, find a quiet corner and just surrender to the storytelling voice of the unstoppable, ever-resourceful Thursday Next.” —The Washington Post“Fforde’s imaginative novel will satiate readers looking for a Harry Potter-esque tale. . . . The Eyre Affair’s literary wonderland recalls Douglas Adams’s Hitchhikers series, the works of Lewis Carroll and Woody Allen’s The Kugelmass Episode.”—USA Today“[Thursday Next is] part Bridget Jones, part Nancy Drew, and part Dirty Harry.” —Michiko Kakutani, The New York Times“Delightfully clever . . . Filled with clever wordplay, literary allusion and bibliowit, The Eyre Affair combines elements of Monty Python, Harry Potter, Stephen Hawking and Buffy the Vampire Slayer, but its quirky charm is all its own.” —The Wall Street Journal“Jasper Fforde’s first novel, The Eyre Affair, is a spirited sendup of genre fiction—it’s part hardboiled mystery, part time-machine caper—that features a sassy, well-read ‘Special Operative in literary detection’ named Thursday Next, who will put you more in mind of Bridget Jones than Miss Marple.  Fforde delivers almost every sentence with a sly wink, and he’s got an easy way with wordplay, trivia, and inside jokes. . . . Fforde’s verve is rarely less than infectious.” —The New York Times Book Review“Jasper Fforde’s genre-busting, whoppingly imaginative first novel, The Eyre Affair, is packed with literary allusions . . . .Thanks to Fforde’s terrific imagination, this definitely will not be the winter of our discontent.” —The Miami Herald“For sheer inventiveness his book is hard to beat. The Eyre Affair is an exuberant mélange of crime, comedy and alternative history.” —Houston Chronicle“The Eyre Affair by Jasper Fforde could hardly be more delightful. . . . It takes a bold adventurer to play fast and loose with literature, and that’s wh

The Eyre Affair A Thursday Next Novel, is it available on Amazon?

Yes! But at Pricepulse we inform you when is the lowest price to buy the The Eyre Affair A Thursday Next Novel

Should I buy the The Eyre Affair A Thursday Next Novel now?

What is the current price of The Eyre Affair A Thursday Next Novel?

What was the lowest price for the The Eyre Affair A Thursday Next Novel?