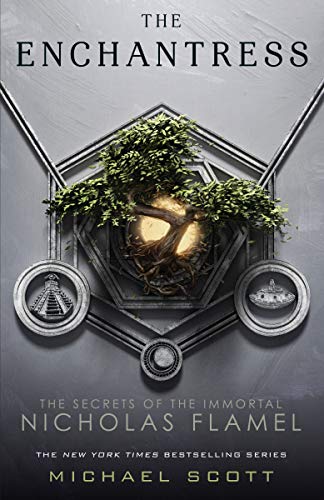 Product Description Nicholas Flamel appeared in J.K. Rowling’s Harry Potter—but did you know he really lived? And his secrets aren't safe! Discover the truth in book six of Michael Scott’s New York Times bestselling series the Secrets of the Immortal Nicholas Flamel. The Location: The home of the Elders. The Time: The last day of Nicholas and Perenelle Flamel's long existence.    The two that are one must become the one that is all. One to save the world, one to destroy it.    Sophie and Josh Newman traveled ten thousand years into the past following Dr. John Dee and Virginia Dare to the home of the Elders at Danu Talis. But this is no ordinary island--it is the legendary city of Atlantis, and Scathach, Prometheus, Palamedes, Shakespeare, Saint-Germain, and Joan of Arc are also there.    Here, as the Flamels take their final breaths, the battle for the world begins and ends. Except no one is sure what--or who--the twins will be fighting for. “The Secrets of the Immortal Nicholas Flamel has everything you loved about Harry Potter, including magic, mystery, and a constant battle of good versus evil.”— Bustle Read the whole series! The Alchemyst The Magician The Sorceress The Necromancer The Warlock The Enchantress Review Praise for The Secrets of the Immortal Nicholas Flamel series: A New York Times Bestselling Series A USA Today Bestseller A Kids' Indie Next List Selection A New York Public Library Book for the Teen Age An ILA Young Adult Choice Book An ILA Children’s Choice Winner “The Secrets of the Immortal Nicholas Flamel has everything you loved about Harry Potter, including magic, mystery, and a constant battle of good versus evil.”— Bustle   ★ “ [A] riveting fantasy . . . fabulous read.” —School Library Journal, Starred   ★ “ Readers will be swept up.” —Kirkus Reviews, Starred   “ Fans of adventure fantasies like Rick Riordan’s Percy Jackson and the Olympians series will eat this one up.” —VOYA   “An exciting and impeccably thought-out fantasy, well-suited for those left in the lurch by Harry Potter’s recent exeunt.” —Booklist About the Author   Michael Scott is the New York Times bestselling author of The Secrets of the Immortal Nicholas Flamel series, an authority on mythology and folklore, and one of Ireland’s most successful authors. A master of fantasy, science fiction, horror, and folklore, Michael has been hailed by the Irish Times as “the King of Fantasy in these isles.” The Enchantress is the sixth book in the Nicholas Flamel series. Look for book one, The Alchemyst; book two, The Magician; book three, The Sorceress; book four, The Necromancer; and book five, The Warlock, all available from Delacorte Press. You can follow Michael Scott on Twitter @flamelauthor and visit him at DillonScott.com. Excerpt. © Reprinted by permission. All rights reserved. Chapter One The small crystal mirror was ancient. Older than mankind, it predated the Elders, the Archons and even the Ancients who had come before them. This was an Earthlord artifact, washed up when the Isle of Danu Talis was ripped from the primeval seabed. For millennia the mirror had hung on a wall in a side room in the Palace of the Sun on Danu Talis. Generations of Great Elders, and then the Elders who had come after them, had puzzled over the small rectangle of crystal in the plain black frame that was not wood, not metal, nor was it stone. Although it had all the appearance of a mirror, it wasn’t a true reflecting glass: its surface showed only shadows, though those who peered closely claimed they caught a hint of their skulls beneath their flesh, of the impressions of bones beneath skin. Occasionally--infrequently--some claimed to catch glimpses of distant landscapes, polar ice caps, expanses of deserts or steaming jungles. At certain times of the year--at the fall and summer -equinoxes--and during solar and lunar eclipses, the glass would shiver and show scenes of times and places beyond comprehension and unde