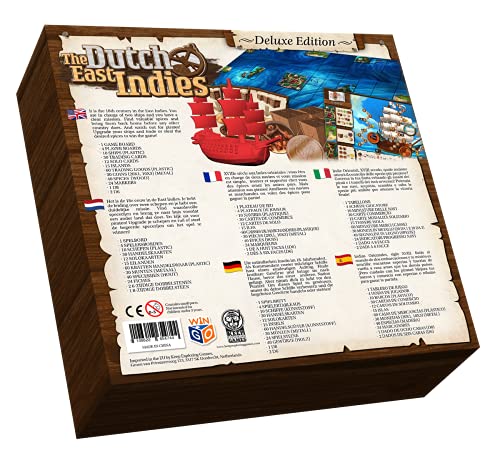 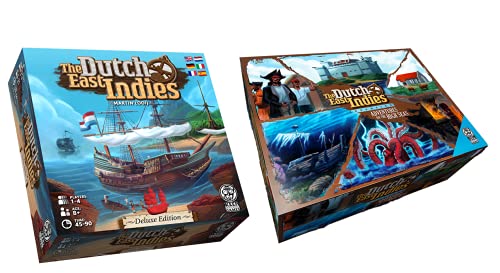 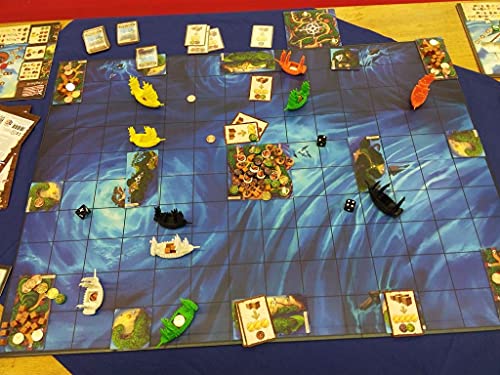 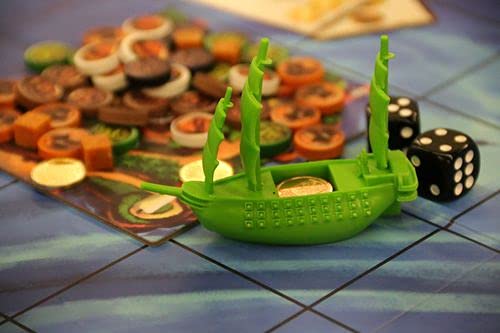 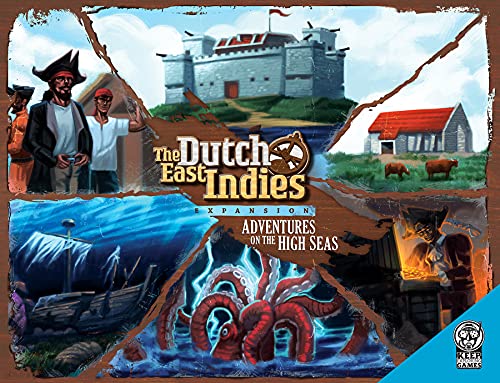 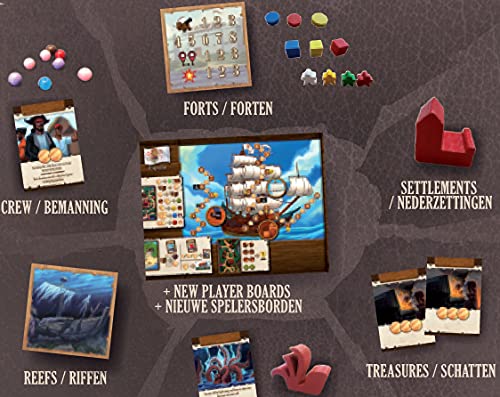 The deluxe edition of The Dutch East Indies along with the expansion; Adventures on the High Seas. It is the 18th century in the East Indies. You are in charge of two ships, and you have a clear mission: Find valuable spices, and bring them back home — but there are a few catches. You have to bring these spices home before any other country does. There are pirates out there who will shoot your ships to smithereens when given the chance. And as for finding those spices, you and your competitors could just trade them with locals and bring them home — or you can battle and try to steal them from one another! The first player to bring home two copies of the four desirable spices wins The Dutch East Indies! The Deluxe version includes upgraded wood, plastic and metal components instead of cardboard. Also included is the expansion, Adventures on the High Seas! Instead of just throwing all new mechanisms to you, we have sorted them into 6 modules. You can add a single module to the game, a few, or just throw them all in 1 – Forts. In the Base Game, when you deliver your spices back on your home island, they are safe. Now, not anymore… You start with a fort on your home island with which you can defend against other players trying to steal your spices. 2 – Settlements. You can now build settlements on wild islands with no cards left on them. The settlement will produce crates for you. 3 – Treasures. Similarly to settlements, when you find a treasure, you find gold! Which aids you wih modules 1 and 6. 4 – Events. No longer can you only draw trade propositions at wild islands. When you least expect it, lightning strikes! Or you summon the Kraken 5- Reefs. Another danger on the High Seas for you, your opponents and the pirates! Are you going to be safe and sail around them, or take the risk and hope your ship passes safely through it? 6- Crew. You can now build settlements on empty islands, but the locals on the island are also looking for something to do!

Amazing
Great
Average
High
This is absolutely the best time to buy. Don’t miss out, there's 57% probability of this price being higher soon. Buy now.
Buy on Amazon

KLASK: The Magnetic Award-Winning Party Game of Skill - for Kids and Adults of All Ages That’s Half Foosball, Half Air Hockey

KLASK: The Magnetic Award-Winning Party Game of Skill - for Kids and Adults of All Ages That’s Half Foosball, Half Air Hockey

The Game of Life Junior Board Game for Kids Ages 5 and Up, Game for 2-4 Players

MONOPOLY Crooked Cash Board Game for Families and Kids Ages 8 and Up, Includes Mr Decoder to Find Fakes, Game for 2-6 Players

Harry Potter Catch The Golden Snitch, A Quidditch Board Game for Witches, Wizards and Muggles, Family Game Ages 8 & up

The Dutch East Indies Bundle Base Game And Adventu, is it available on Amazon?

Yes! But at Pricepulse we inform you when is the lowest price to buy the The Dutch East Indies Bundle Base Game And Adventu

Should I buy the The Dutch East Indies Bundle Base Game And Adventu now?

This is absolutely the best time to buy. Don’t miss out, there's 57% probability of this price being higher soon. Buy now.

What is the current price of The Dutch East Indies Bundle Base Game And Adventu?

What was the lowest price for the The Dutch East Indies Bundle Base Game And Adventu?