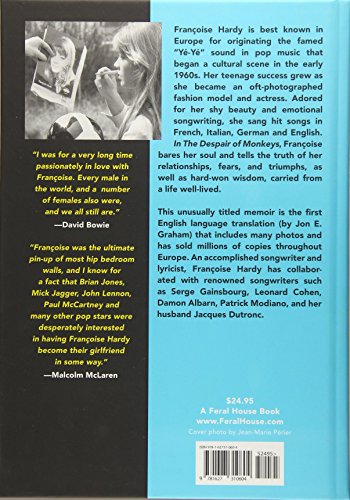 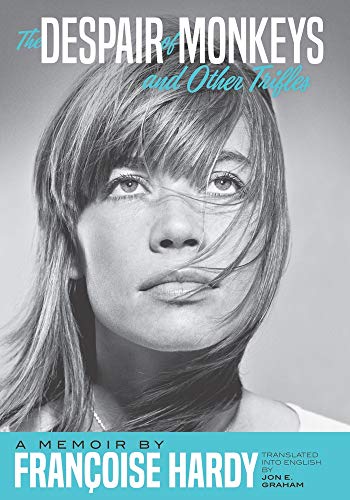 Product Description “I was for a very long time passionately in love with her, as I’m sure she’s guessed. Every male in the world, and a number of females also were, and we all still are.” ―David Bowie “Françoise was the ultimate pin-up of most hip bedroom walls, and I know for a fact that Brian Jones and Mick Jagger, John Lennon, Paul McCartney, and many other pop stars were desperately interested in having Françoise Hardy become their girlfriend in some way.” ―Malcolm McLaren Françoise Hardy is best known in Europe for originating the famed “Yé-Yé” sound in pop music which began a cultural scene in the early 1960s. Her teenage success grew as she became a much-photographed fashion model and actress. Adored for her shy beauty and emotional songwriting, she sang hit songs in French, Italian, and German. In The Despair of Monkeys and Other Trifles, she bares her soul and tells the truth of her relationships, fears, and triumphs as well as the hard-won wisdom carved from a life well-lived. This unusually-titled memoir has sold millions of copies in its French, German, Italian, and Spanish editions in recent years. This first English-language release is expertly translated by Jon E. Graham. The book contains dozens of images in addition to Hardy’s intimate recollections of her upbringing and career. Françoise Hardy, an accomplished songwriter and lyricist also collaborated with accomplished songwriters such as Leonard Cohen, Serge Gainsbourg, and Patrick Modiano. Both her early pop work and later material in a complex and mature style helped generate a dedicated cult following. Both her husband, Jacques Dutronc, and son, Thomas Dutronc, are respected musicians in France. Review Hardy is “the very essence of French style.” —Nicolas Ghesquière, creative director of Louis Vuitton "Ophelia without the delirium" —Unknown critic About the Author Françoise Hardy -- at the beginning of her career, at least -- covered more stylistic ground and owed more debts to pop/rock than she's given credit for. Immensely popular in her native France, the chanteuse first displayed her breathy, measured vocals in the early and mid-'60s. Her (mostly self-penned) recordings from that era draw from French pop traditions, lightweight '50s teen idol rock, girl groups, and sultry jazz and blues -- sometimes in the same song. The material is perhaps too unreservedly sentimental for some (in the French tradition), but the songs are invariably catchy and the production, arrangements, and near-operatic backup harmonies excellent, at times almost Spector-esque. Fans of Marianne Faithfull's mid-'60s work can find something of a French equivalent here, though Hardy's material was stronger and her delivery more confident. Acquisitions Editor at Inner Traditions, was born in El Paso, grew up in Vermont, and has lived in NYC, San Francisco, Richmond, Paris, and Philadelphia, before returning to Vermont to work at Inner Traditions. A graduate of Goddard College in Vermont with a major French and English Literature, he has translated more than 50 books from the French, and his work has been recognized by the L.A. Times.

Amazing
Great
Average
High
It's not a good time to buy now, there's a 80% probability this price will decrease. Our advice is to Watch it.
Buy on Amazon

The Despair Of Monkeys And Other Trifles A Memoir, is it available on Amazon?

Yes! But at Pricepulse we inform you when is the lowest price to buy the The Despair Of Monkeys And Other Trifles A Memoir

Should I buy the The Despair Of Monkeys And Other Trifles A Memoir now?

It's not a good time to buy now, there's a 80% probability this price will decrease. Our advice is to Watch it.

What is the current price of The Despair Of Monkeys And Other Trifles A Memoir?

What was the lowest price for the The Despair Of Monkeys And Other Trifles A Memoir?