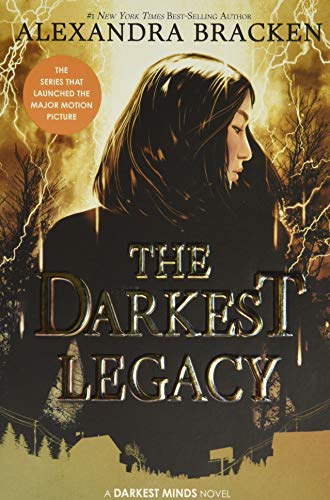 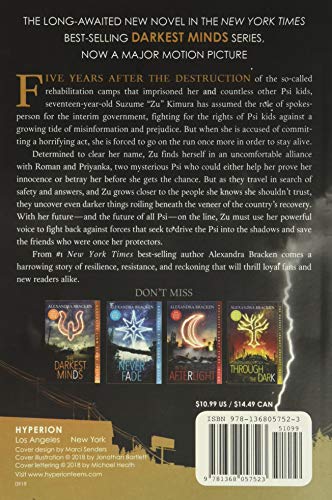 Product Description The long-awaited new novel in the New York Times best-selling Darkest Minds series, now a major motion picture. Five years after the destruction of the so-called rehabilitation camps that imprisoned her and countless other Psi kids, seventeen-year-old Suzume “Zu” Kimura has assumed the role of spokesperson for the interim government, fighting for the rights of Psi kids against a growing tide of misinformation and prejudice. But when she is accused of committing a horrifying act, she is forced to go on the run once more in order to stay alive. Determined to clear her name, Zu finds herself in an uncomfortable alliance with Roman and Priyanka, two mysterious Psi who could either help her prove her innocence or betray her before she gets the chance. But as they travel in search of safety and answers, and Zu grows closer to the people she knows she shouldn’t trust, they uncover even darker things roiling beneath the veneer of the country’s recovery. With her future―and the future of all Psi―on the line, Zu must use her powerful voice to fight back against forces that seek to drive the Psi into the shadows and save the friends who were once her protectors. From #1 New York Times best-selling author Alexandra Bracken comes a harrowing story of resilience, resistance, and reckoning that will thrill loyal fans and new readers alike. Review "Fast-paced and engrossing... Zu’s first-person narration creates maximum suspense as events escalate in intensity, and an occasional flashback keeps the story off-balance in a way that ups the ante for the good guys. Although several threads are wrapped up by book’s end, there is room for more installments in this popular series."― Booklist "An empowering story of independence, resilience, and one girl’s decision to act in the face of impossible odds and indifference. A must-read for fans of the series and a nail-biting introduction for readers discovering it for the first time."― School Library Journal About the Author Alexandra Bracken is the #1 New York Times bestselling author of The Darkest Minds series. Born and raised in Arizona, she moved East to study history and English at the College of William & Mary in Virginia. After working in publishing for several years, Alex now writes full-time and can be found hard at work on her next novel in a charming little apartment that's perpetually overflowing with books. Visit her online at www.alexandrabracken.com and on Twitter @alexbracken.

The Darkest Legacy The Darkest Minds Book 4 A Dark, is it available on Amazon?

Yes! But at Pricepulse we inform you when is the lowest price to buy the The Darkest Legacy The Darkest Minds Book 4 A Dark