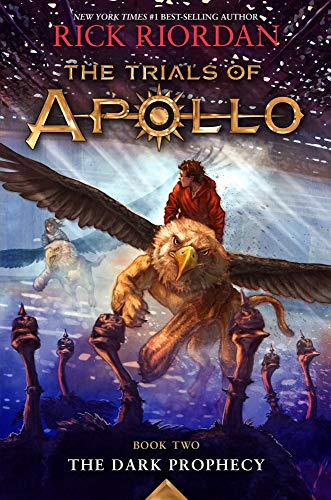 Product Description Book Two of Rick Riordan's uproarious Trials of Apollo series, now in paperback. Zeus has punished his son Apollo--god of the sun, music, archery, poetry, and more--by casting him down to earth in the form of a gawky, acne-covered sixteen-year-old mortal named Lester. The only way Apollo can reclaim his rightful place on Mount Olympus is by restoring several Oracles that have gone dark. What is affecting the Oracles, and how can Apollo/Lester do anything about them without his powers? After experiencing a series of dangerous--and frankly, humiliating--trials at Camp Half-Blood, Lester must now leave the relative safety of the demigod training ground and embark on a hair-raising journey across North America. Somewhere in the American Midwest, he and his companions must find the most dangerous Oracle from ancient times: a haunted cave that may hold answers for Apollo in his quest to become a god again--if it doesn't kill him or drive him insane first. This paperback includes the first chapter of The Trials of Apollo Book 3: THE BURNING MAZE, plus the first chapters of two Rick Riordan Presents novels. About the Author Rick Riordan, dubbed "storyteller of the gods" by Publishers Weekly, is the author of five #1 New York Times best-selling middle grade series with millions of copies sold throughout the world: Percy Jackson and the Olympians, The Heroes of Olympus, and the Trials of Apollo, based on Greek and Roman mythology; the Kane Chronicles, based on Ancient Egyptian mythology; and Magnus Chase and the Gods of Asgard, based on Norse mythology. Rick collaborated with illustrator John Rocco on two #1 New York Times best-selling collections of Greek myths for the whole family: Percy Jackson's Greek Gods and Percy Jackson's Greek Heroes. Rick is also the publisher of an imprint at Disney-Hyperion, Rick Riordan Presents, dedicated to finding other authors of highly entertaining fiction based on world mythologies. He lives in Boston, Massachusetts with his wife and two sons. Follow him on Twitter at @RickRiordan.

Current price$7.50
Since 49 days
Average price$8.13
Based on 2 years
Lowest price ever$3.93
2 months ago
Highest price ever$9.99
23 months ago
Amazing
Great
Average
High
This is a great price to buy! There's a 64% probability this price will be higher. Our advise is Buy it now.
Buy on Amazon

The Dark Prophecy The Trials Of Apollo Book Two Tr, is it available on Amazon?

Yes! But at Pricepulse we inform you when is the lowest price to buy the The Dark Prophecy The Trials Of Apollo Book Two Tr

Should I buy the The Dark Prophecy The Trials Of Apollo Book Two Tr now?

This is a great price to buy! There's a 64% probability this price will be higher. Our advise is Buy it now.

What is the current price of The Dark Prophecy The Trials Of Apollo Book Two Tr?

What was the lowest price for the The Dark Prophecy The Trials Of Apollo Book Two Tr?

The lowest historical price was $3.93