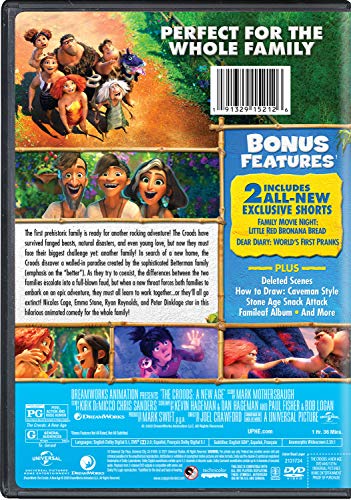 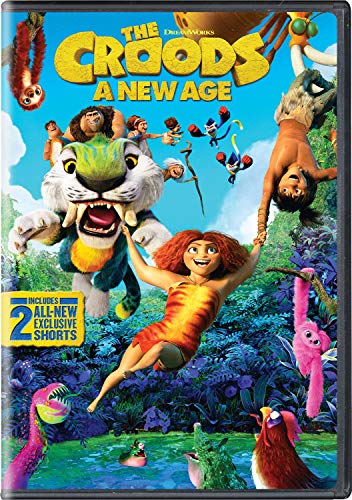 The first prehistoric family is ready for another rocking adventure! The Croods have survived fanged beasts, natural disasters, and even young love, but now they must face their biggest challenge yet: another family! In search of a new home, the Croods discover a walled-in paradise created by the sophisticated Betterman family (emphasis on the "better"). As they try to coexist, the differences between the two families escalate into a full-blown feud, but when a new threat forces both families to embark on an epic adventure, they must all learn to work together…or they'll all go extinct! Nicolas Cage, Emma Stone, Ryan Reynolds, and Peter Dinklage star in this hilarious animated comedy for the whole family! Bonus Content: Dear Diary: World's First Pranks Family Movie Night: Little Red Bronana Bread Gag Reel To: Gerard Deleted Scenes The Croods' Family Album The Evolution Of... How to Draw: Caveman Style Famileaf Album Stone Age Snack Attack Feature Commentary with Director Joel Crawford, Producer Mark Swift, Head of Story Januel Mercado and Editor Jim Ryan

Current price$19.99
Since 46 hours
Average price$19.11
Based on 4 months
Lowest price ever$12.99
16 days ago
Highest price ever$29.98
4 months ago
Amazing
Great
Average
High
It's unlikely to find significant changes in price, we expect this product to remain within its Average price. Our advice is Buy now.
Buy on Amazon

The Croods A New Age Dvd, is it available on Amazon?

Yes! But at Pricepulse we inform you when is the lowest price to buy the The Croods A New Age Dvd

Should I buy the The Croods A New Age Dvd now?

What is the current price of The Croods A New Age Dvd?

What was the lowest price for the The Croods A New Age Dvd?