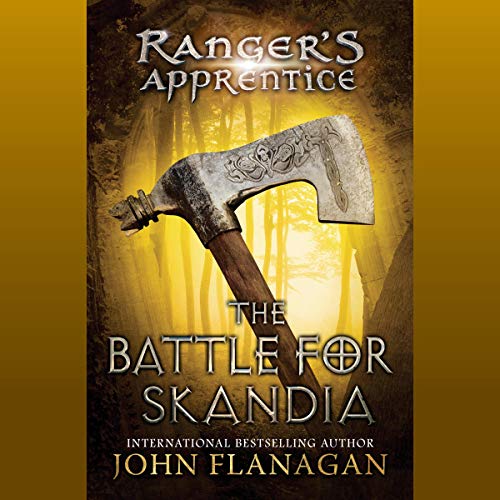 The international best-selling series with more than five million copies sold in the US alone!

Still far from their homeland after escaping slavery in the icebound land of Skandia, Will and Evanlyn's plans to return to Araluen are spoiled when Evanlyn is taken captive by a Temujai warrior. Though still weakened by the warmweed's toxic effects, Will employs his Ranger training to locate his friend, but an enemy scouting party has him fatally outnumbered.

Will is certain death is close at hand, until Halt and Horace make a daring, last-minute rescue. The reunion is cut short, however, when Halt makes a horrifying discovery: Skandia's borders have been breached by the entire Temujai army. And Araluen is next in their sights.

If two kingdoms are to be saved, an unlikely union must be made. Will it hold long enough to vanquish a ruthless new enemy? Or will past tensions spell doom for all?

The battles and drama are nonstop in audiobook four of this hugely popular epic.

Perfect for fans of J.R.R. Tolkien's Lord of the Rings, T.H. White's The Sword in the Stone, Christopher Paolini's Eragon series, and George R. R. Martin's Game of Thrones/a Song of Ice and Fire series.

The Battle For Skandia Rangers Apprentice Book 4, is it available on Amazon?

Yes! But at Pricepulse we inform you when is the lowest price to buy the The Battle For Skandia Rangers Apprentice Book 4

Should I buy the The Battle For Skandia Rangers Apprentice Book 4 now?

What is the current price of The Battle For Skandia Rangers Apprentice Book 4?

What was the lowest price for the The Battle For Skandia Rangers Apprentice Book 4?