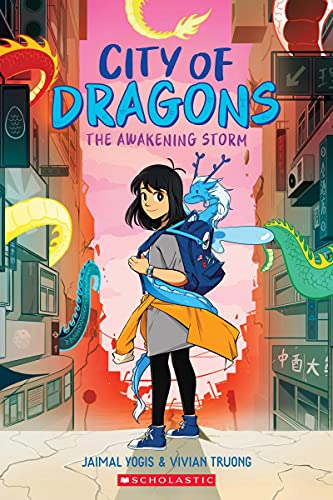 Product Description Grace and her friends must protect a newly hatched dragon from mysterious evildoers.When Grace moves to Hong Kong with her mom and new stepdad, her biggest concern is making friends at her fancy new boarding school. But when a mysterious old woman gifts her a dragon egg during a field trip, Grace discovers that the wonderful stories of dragons she heard when she was a young girl might actually be real--especially when the egg hatches overnight.The dragon has immense powers that Grace has yet to understand. And that puts them both in danger from mysterious forces intent on abusing the dragon's power. And now it's up to Grace and her school friends to uncover the sinister plot threatening the entire city! From School Library Journal Gr 4–7—Years after the disappearance of Grace's doting father, her mother has married a redheaded stranger involved in cutting-edge health research, and Grace begins a new life at a Hong Kong international school. While finding her footing, she becomes an unlikely caregiver to an adorable blue water dragon, whom she must protect against those who seek to use the creature's powers for sinister purposes. It's an effective setup to explore how Chinese dragon legends might play out on a modern stage. Veering from teens bumbling through school hallways to high seas hijinks to a literal mad scientist, this is an entertaining tale with explicit roots in myth. The illustrations are colorful and playful, moving the story through its paces at a quick clip. Grace is Asian American, her mother and stepfather are white, and her crack team of international school dragon defenders include a Hong Kong local, an inventive Indian kid, and an Australian Aboriginal character—a dynamic group of friends who seem poised for more opportunities for hilarity and heroism in future books. VERDICT An engaging read with some superhero-style peril and violence, this is a story of bravery and self-discovery.—Emilia Packard, Tokyo About the Author Jaimal Yogis is the author of Saltwater Buddha, The Fear Project, All Our Waves Are Water, and the children's book series Mop Rides the Waves of Life and Mop Rides the Waves of Change. His writing has also appeared in The Atlantic, ESPN Magazine, and The Washington Post. He lives in San Francisco. Vivian Truong is a comic artist who has created artwork for Riot Games, miHoYo, Rebellion, and more. Her work includes the Punches and Plants webcomic series for the popular MOBA game League of Legends. She also works as a storyboard artist for game studios, a digital production studio, and a children’s book publisher. She currently lives in London.

The Awakening Storm A Graphic Novel City Of Dragon, is it available on Amazon?

Yes! But at Pricepulse we inform you when is the lowest price to buy the The Awakening Storm A Graphic Novel City Of Dragon

Should I buy the The Awakening Storm A Graphic Novel City Of Dragon now?

What is the current price of The Awakening Storm A Graphic Novel City Of Dragon?

What was the lowest price for the The Awakening Storm A Graphic Novel City Of Dragon?