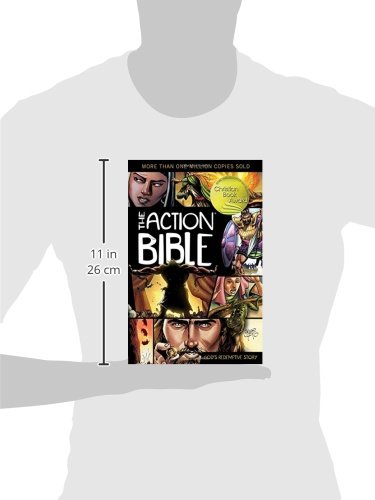 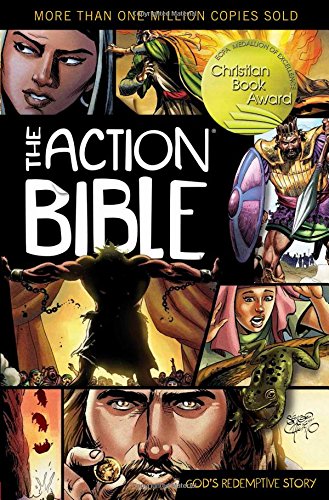 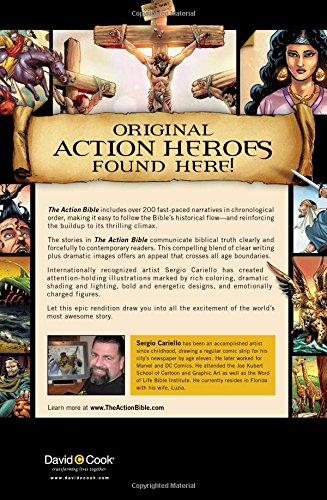 Product Description Here’s the most complete picture Bible ever! And it features a captivating, up-to-date artwork style—making it the perfect Bible for today’s visually focused culture.   The Action Bible presents 215 fast-paced narratives in chronological order, making it easier to follow the Bible’s historical flow—and reinforcing the build-up to its thrilling climax.   The stories in The Action Bible communicate clearly and forcefully to contemporary readers. This compelling blend of clear writing plus dramatic images offers an appeal that crosses all age boundaries.   Brazilian artist Sergio Cariello has created attention-holding illustrations marked by rich coloring, dramatic shading and lighting, bold and energetic designs, and emotionally charged figures.   Let this epic rendition draw you into all the excitement of the world’s most awesome story. About the Author Sergio Cariello was born in Brazil in 1964 and started drawing as soon as could hold a pencil.  At the age of five, he already knew that he wanted to be a cartoonist.  And so did everyone else--he drew on church bulletins, napkins, and every surface within his reach.  He currently resides in Holiday, Florida.Sergio has worked for Marvel Comics and DC Comics.  He attended the Joe Kubert School of Cartoon and Graphic Art as well as the Word of Life Bible Institute in upstate New York.In February, 2006, he was contacted by David C. Cook to gauge his interest in a new project; completely re-illustrating Cook's classic Picture Bible.  What David C. Cook couldn't know is that Sergio had grown up in Brazil with a Portuguese translation of that very same Picture Bible.  He was reading the Picture Bible before he learned to ride a bike! Even though he knew as a kid that he wanted to be a comic artist, he never would have dreamed that he would one day get to work on the Picture Bible itself!

Amazing
Great
Average
High
It's not a good time to buy now, there's a 56% probability this price will decrease. Our advice is to Watch it.
Buy on Amazon

The Action Bible, is it available on Amazon?

Yes! But at Pricepulse we inform you when is the lowest price to buy the The Action Bible

Should I buy the The Action Bible now?

It's not a good time to buy now, there's a 56% probability this price will decrease. Our advice is to Watch it.

What is the current price of The Action Bible?

What was the lowest price for the The Action Bible?