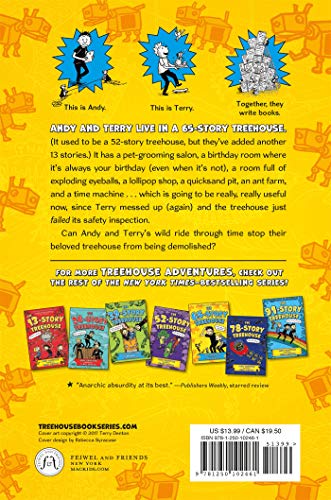 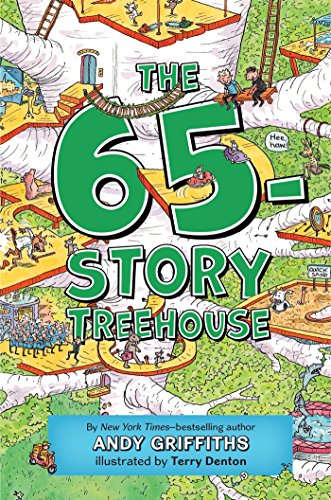 Product Description Before they can go up, they have to go back―travel through time with Andy and Terry as they attempt to save the treehouse! New York Times bestselling author Andy Griffiths invites readers to come hang out with him and his friend Terry in their 65-Story Treehouse-the fifth book in the illustrated chapter book series filled with Andy and Terry's signature slapstick humor! Andy and Terry live in a 65-Story Treehouse. (It used to be 52 stories, but they keep expanding.) It has a pet-grooming salon, a birthday room where it's always your birthday (even when it's not), a room full of exploding eyeballs, a lollipop shop, a quicksand pit, an ant farm, and a time machine...which is going to be really, really useful now, since Terry messed up (again) and the treehouse just FAILED it's safety inspection. Join Andy and Terry on a whirlwind trip through time as they try to stop the treehouse from being demolished! Read the whole series!The 13-Story TreehouseThe 26-Story TreehouseThe 39-Story TreehouseThe 52-Story TreehouseThe 65-Story TreehouseThe 78-Story TreehouseThe 91-Story Treehouse Review Andy Griffiths and the Treehouse series: "Anarchic absurdity at its best. . . . Denton's manic cartooning captures every twist and turn in hilarious detail." ―Publishers Weekly, starred review on The 13-Story Treehouse "Will appeal to fans of Jeff Kinney and Dav Pilkey . . . The wonderfully random slapstick humor is tailor-made for reluctant readers . . . A treat for all." ―Booklist on The 13-Story Treehouse "Twice the treehouse, twice the fun? You bet. . . . Denton's furiously scrawled line drawings milk the silly, gross-out gags for everything they're worth. Kids should be flipping pages faster than a pair of inflatable underpants can skyrocket the young heroes to safety." ―Publishers Weekly, starred review on The 26-Story Treehouse "This zany sequel, as much cartoon illustration as text, is an almost nonstop adventure." ―Booklist on The 26-Story Treehouse About the Author New York Times-bestselling author Andy Griffiths, who wrote the Treehouse series, Killer Koalas From Outer Space, The Big Fat Cow that Goes Kapow, The Cat on the Mat Is Flat, and The Day My Butt Went Psycho!, is at his best in these wild storytelling adventures, perfect for readers of all ages. Terry Denton has worked with Andy on many books, including the Treehouse series and Killer Koalas From Outer Space. He lives in Australia with his wife and three kids.

Current price$6.19
Since 3 months
Average price$9.68
Based on 3 years
Lowest price ever$6.12
2 years ago
Highest price ever$13.66
2 years ago
Amazing
Great
Average
High
This is absolutely the best time to buy. Don’t miss out, there's 83% probability of this price being higher soon. Buy now.
Buy on Amazon

Quidditch Through the Ages: The Illustrated Edition (Harry Potter)

Between Mom and Me: A Mother and Son Keepsake Journal

Unbroken (The Young Adult Adaptation): An Olympian's Journey from Airman to Castaway to Captive

The 65 Story Treehouse Time Travel Trouble The Tre, is it available on Amazon?

Yes! But at Pricepulse we inform you when is the lowest price to buy the The 65 Story Treehouse Time Travel Trouble The Tre

Should I buy the The 65 Story Treehouse Time Travel Trouble The Tre now?

This is absolutely the best time to buy. Don’t miss out, there's 83% probability of this price being higher soon. Buy now.

What is the current price of The 65 Story Treehouse Time Travel Trouble The Tre?

What was the lowest price for the The 65 Story Treehouse Time Travel Trouble The Tre?