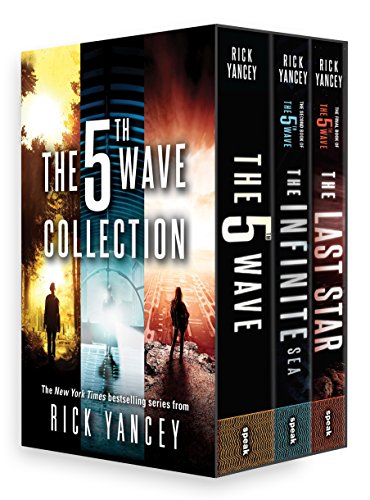 Product Description Rick Yancey's entire blockbuster bestselling 5th Wave series is now available in a boxed set—great for binge-reading! In  The 5th Wave, Cassie finds herself in a world devastated by alien attack, desperate to save herself and find her lost brother. As the onslaught from the Others—the beings that look human and kill anyone they see—continues, Cassie's mission is to stay alone and stay alive. But then she meets Evan Walker, who may be Cassie's only hope for rescuing her brother--or even saving herself. Cassie must choose: between trust and despair, between defiance and surrender, between life and death. In  The Infinite Sea, the heart-stopping action continues as the situation gets even worse for Cassie and the rest of Earth's remaining human survivors. No one  knows the depths to which the Others will sink, nor can they imagine the heights to which the human spirit can reach as they face the ultimate test. In The Last Star, Earth's remaining survivors will need to decide what's more important: saving themselves . . . or saving what makes them human. The final book in this epic series will leave you awestruck. Included in this Collection:  The 5th Wave,  The Infinite Sea, The Last Star "Remarkable, not-to-be-missed-under-any-circumstances."—Entertainment Weekly "Wildly entertaining . . . I couldn't turn the pages fast enough."—Justin Cronin,  The New York Times Book Review"A modern sci-fi masterpiece."—USA Today Review Praise for The 5th Wave Now a major motion picture starring Chloë Grace Moretz "Remarkable, not-to-be-missed-under-any-circumstances."— Entertainment Weekly "A modern sci-fi masterpiece . . ."—USAToday.com   "Wildly entertaining . . . I couldn't turn the pages fast enough."—Justin Cronin,  The New York Times Book Review Praise for The Infinite Sea  “Heart-pounding pacing, lyrical prose and mind-bending twists . . .”— The New York Times Book Review “Impressively improves on the excellent beginning of the trilogy.”— USA Today “An epic sci-fi novel with all the romance, action, and suspense you could ever want.”—Seventeen.com   Praise for The Last Star “Yancey’s prose remains achingly precise, and this grows heavier, tighter, and more impossible to put down as the clock runs out…this blistering finale proves the truth of the first two volumes: it was never about the aliens.”— Booklist, starred review   “A haunting, unforgettable finale.”— Kirkus Reviews   “Yancey doesn’t hit the breaks for one moment, and the action is intense, but the language always stays lyrical and lovely. It’s a satisfying end to an impressive trilogy, true to the characters and the world Yancey created.”— Entertainment Weekly   “Yancey has capped off his riveting series with a perfect ending.”—TeenReads.com   “[T]he ending provides both satisfaction and heartbreak.”— Publishers Weekly   “Yancey's writing is just as solid and descriptive as in the first two books….What Yancey does beautifully is reveal the human condition.”—Examiner.com "Rick Yancey sticks the (alien) landing in the action-packed finale to his  The 5th Wave invasion saga . . . . And the author gives us a major dose of girl power as well, pairing Cassie and Ringer for an uneasy alliance that provides the best moments in this fantastic series’ thought-provoking and satisfying conclusion.”—USA Today Books in the series: The 5th Wave (The First Book of The 5th Wave) The Infinite Sea (The Second Book of The 5th Wave) The Last Star (The Third Book of the The 5th Wave) About the Author Rick Yancey (www.rickyancey.com) is the author of the  New York Times bestseller  The 5th Wave,  The Infinite Sea, several adult novels, and the memoir  Confessions of a Tax Collector. His first young-adult novel,  The Extraordinary Adventures of Alfred Kropp, was a finalist for the Carnegie Medal. In 2010, his novel,  The Monstrumologist, received a Michael L. Printz Honor, and the sequel,  The Curse of the Wendigo, was a finalist for the  Los