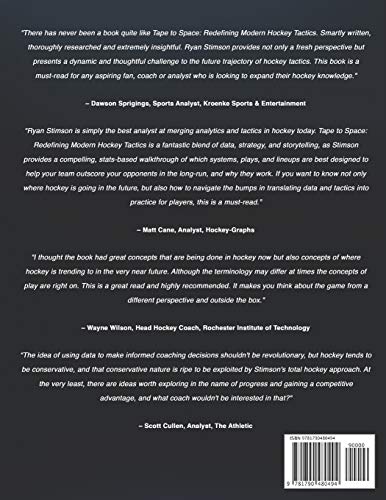 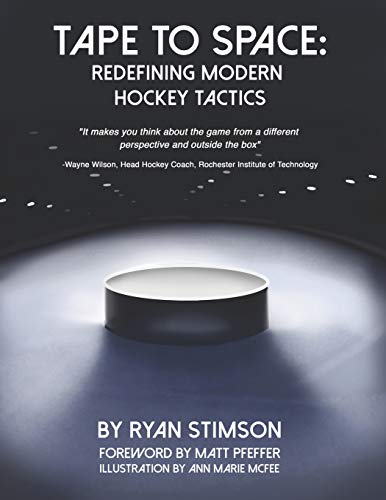 Product Description Ryan Stimson outlines a modern approach to playing fluid, creative hockey based on sound analytical research. He shows you, the coach, how to build a tactical framework from the ground up and illustrates how each aspect of the system links with each other. Part 1 details the overall philosophy behind team play, roster construction, and tactical decisions. "Should we play fast or slow? Which players should play together?" Part 2 takes a modern approach to hockey tactics, using years of quantitative research by Stimson and others determined to find more efficient and optimal ways of playing the game. You won't find a rigid system here, but a set of beliefs and ideology put on the ice that incorporates the highest levels of creativity, fluidity, and support. Finally in part Part 3, a narration of Stimson's coaching experience as he attempts to bring this style of play to life at the 14U level. What works? What doesn't? How does this new approach work when clashing with an old-school coach? Stimson reevaluates everything from names of positions to optimal routes in transition play. This book will appeal to any coach wanting to learn more about analytics, and to any analyst wanting to learn more about tactics. Stimson meets you in the middle and illustrates what can come out of union of the two: Total Hockey. Review "Stimson is the most prominent voice of a new generation of theorists in hockey who wish to construct a higher level of discourse within the sport." - Matt Pfeffer, Analyst, Nashville Predators "I believe Ryan is one of the great innovative minds working in hockey today, but I believe that he has only scratched the surface of what he is going to provide to how the game of hockey is played and evaluated. I highly recommend this book to anyone involved in the game." - Kyle MacLennan, Head Hockey Coach/GM, Weeks Major Midgets "What stands out in Stimson's discussion of situational tactics is just how rigorously he considers them. Stimson is an analyst at heart, and while he advances existing and new approaches that he believes will work, he also arms the reader with the sources and information to make up their own mind. And that's what makes this a must-read, and likely launching-off point for any coach or student of the game that wants to take their understanding of the sport, as it is, and as it could be, to the next level." - Nick Mercadante, Analyst, Hockey-Graphs "This is a great read and highly recommended" - Wayne Wilson, Head Hockey Coach, Rochester Institute of Technology This book is a must-read for any aspiring fan, coach or analyst who is looking to expand their hockey knowledge." - Dawson Sprigings, Sports Analyst, Kroenke Sports & Entertainment If you want to know not only where hockey is going in the future, but also how to navigate the bumps in translating data and tactics into practice for players, this is a must-read." - Matt Cane, Analyst, Hockey-Graphs ""The idea of using data to make informed coaching decisions shouldn't be revolutionary, but hockey tends to be conservative, and that conservative nature is ripe to be exploited by Stimson's total hockey approach." - Scott Cullen, Analyst, The Athletic About the Author Ryan has written extensively on hockey analytics since 2013. He has pioneered work in player evaluation and game strategy, leading the popular Passing Project for several seasons. Ryan has contributed on analytics and published new research at Hockey-Graphs, The Athletic, and numerous other outlets, but also has written on using data to better evaluate hockey systems at The Coaches Site. He consulted for RIT Men's Hockey Team from 2015 - 2018 and coached his first 14U team in 2017-2018. He is a Level III USA Hockey Certified Coach and looking to continue coaching in the near future. Ryan lives at home in Brockport, NY with his wife Rachel and their two daughters, Natalie (4), and Emily (8 months). Follow Ryan on Twitter at @RK_Stimp .

Tape To Space Redefining Modern Hockey Tactics, is it available on Amazon?

Yes! But at Pricepulse we inform you when is the lowest price to buy the Tape To Space Redefining Modern Hockey Tactics

Should I buy the Tape To Space Redefining Modern Hockey Tactics now?

What is the current price of Tape To Space Redefining Modern Hockey Tactics?

What was the lowest price for the Tape To Space Redefining Modern Hockey Tactics?