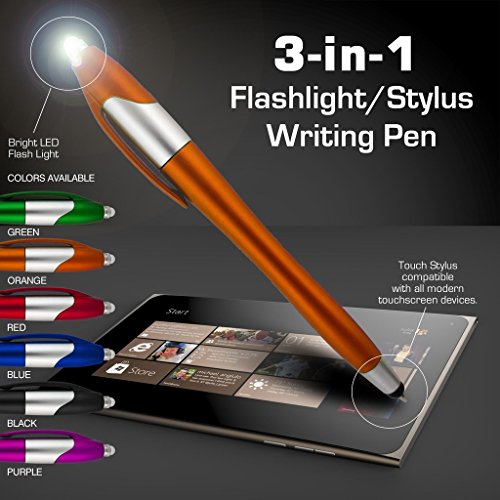 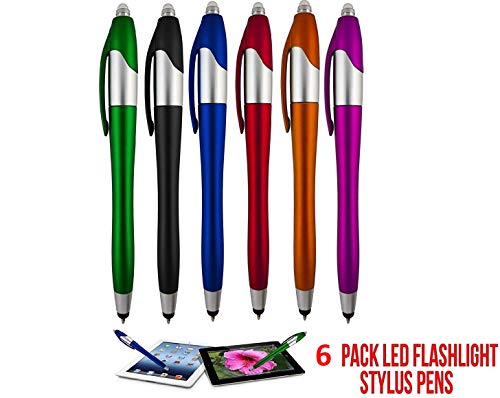 SyPen BRINGS YOU THIS AMAZING 3-IN-1 MULTI-FUNCTION CAPACITIVE STYLUS BALLPOINT LED PEN THAT MAKES YOUR DAY-TO-DAY LIFE EASIER! No other pen on the market comes with as many advantages to its users as ours! This pen operates as a stylus pen for use on the surface of your touchable screen devices, it features an LED light on one end, and also functions as a real writing pen. Finding a pen with these 3-in-1 functions is very rare! OUR PEN IS CONVENIENT, HELPFUL & STYLISH ALL AT THE SAME TIME The Twist Action pen functions as both a pen and a stylus for you to use on all your electronic devices that feature a capacitive screen display. Our stylus pen lets you easily glide across your device’s screen, thus keeping your touch screen smudge-free at all times! This pen also features a special LED light on the top of the pen. Ever have that problem when you're going through your bag full of many items and you can’t locate your car keys or home keys? Ever wish you had a little flashlight on you? Well if you carry around a SyPen pen, all you have to do is turn that pen to the opposite side, push the flashlight tip, and voila! A white LED light. This definitely simplifies your life by giving you a little light when you need it the most. The Flashlight runs on three replaceable button-cell batteries. For added convenience this pen also has a handy pocket clip function that allows you to keep it ready for use at all times. Clip it to your jacket pocket, your purse chain, and more. The ink from this pen is made of the highest quality and writes smoothly in a rich, black color. The pen has a sophisticated chrome accented look. Pen Features : 3 in 1 Pen Stylus and Pen on One End LED Flashlight on Opposite End Ballpoint Pen Plastic Pen Pocket Clip

Current price$15.98
Since 3 days
Average price$16.07
Based on 3 years
Lowest price ever$7.99
3 years ago
Highest price ever$21.99
19 months ago
Amazing
Great
Average
High
It's unlikely to find significant changes in price, we expect this product to remain within its Average price. Our advice is Buy now.
Buy on Amazon

Yes! But at Pricepulse we inform you when is the lowest price to buy the Stylus Pen 3 1 Multi Function Ball Point Black Ink

What was the lowest price for the Stylus Pen 3 1 Multi Function Ball Point Black Ink?