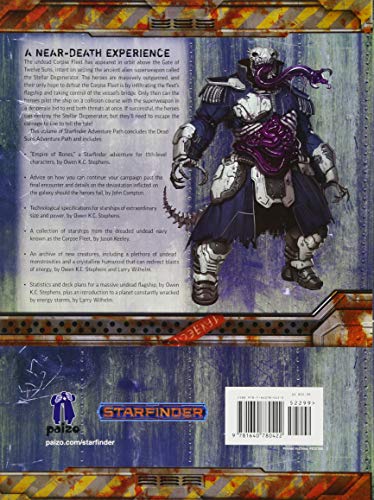 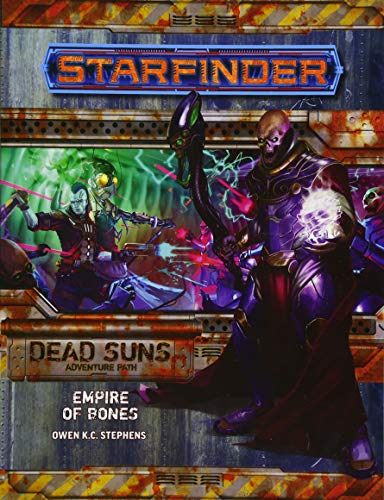 A Near-Death Experience! The undead Corpse Fleet has appeared in orbit above the Gate of Twelve Suns, intent on seizing the ancient alien superweapon called the Stellar Degenerator. The heroes are massively outgunned, and their only hope to defeat the Corpse Fleet is by infiltrating the fleet's flagship and taking control of the vessel's bridge. Only then can the heroes pilot the ship on a collision course with the superweapon in a desperate bid to end both threats at once. If successful, the heroes can destroy the Stellar Degenerator, but they'll need to escape the carnage to live to tell the tale! This volume of Starfinder Adventure Path concludes the Dead Suns Adventure Path and includes "Empire of Bones," a Starfinder adventure for 11th-level characters, by Owen K.C. Stephens. Advice on how you can continue your campaign past the final encounter and details on the devastation inflicted on the galaxy should the heroes fail, by John Compton. Technological specifications for starships of extraordinary size and power, by Owen K.C. Stephens. A collection of starships from the dreaded undead navy known as the Corpse Fleet, by Jason Keeley. An archive of new creatures, including a plethora of undead monstrosities and a crystalline humanoid that can redirect blasts of energy, by Owen K.C. Stephens and Larry Wilhelm. Statistics and deck plans for a massive undead flagship, by Owen K.C. Stephens, plus an introduction to a planet constantly wracked by energy storms, by Larry Wilhelm.

Amazing
Great
Average
High
This is a great price to buy! There's a 65% probability this price will be higher. Our advice is Buy it now.
Buy on Amazon

Mcphee Archie How Did The Chicken Cross The Road Strategy Game

Sorry! Sliders Fall Guys Ultimate Knockout Board Game for Kids Ages 8 and Up, Exciting Twist on The Classic Hasbro Family Board Game

Risk Junior Game: Strategy Board Game; A Kid's Intro to The Classic Risk Game for Ages 5 and Up; Pirate Themed Game (Amazon Exclusive)

Starfinder Adventure Path 6 Empire Of Bones Dead S, is it available on Amazon?

Yes! But at Pricepulse we inform you when is the lowest price to buy the Starfinder Adventure Path 6 Empire Of Bones Dead S

Should I buy the Starfinder Adventure Path 6 Empire Of Bones Dead S now?

This is a great price to buy! There's a 65% probability this price will be higher. Our advice is Buy it now.

What is the current price of Starfinder Adventure Path 6 Empire Of Bones Dead S?

What was the lowest price for the Starfinder Adventure Path 6 Empire Of Bones Dead S?