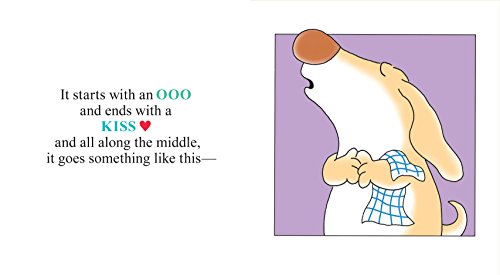 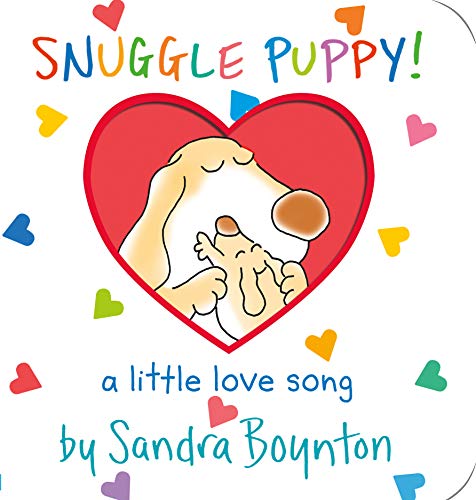 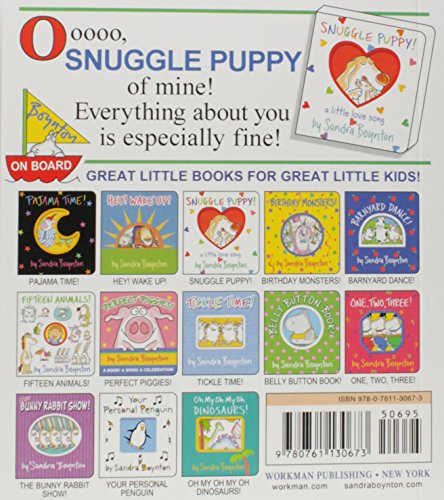 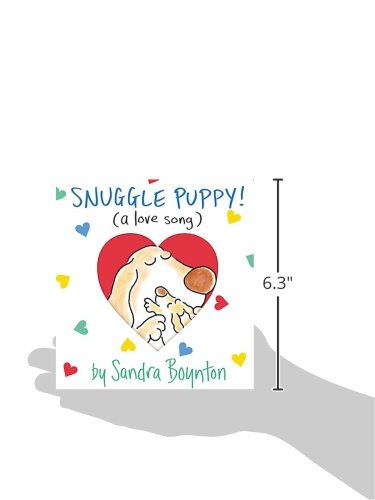 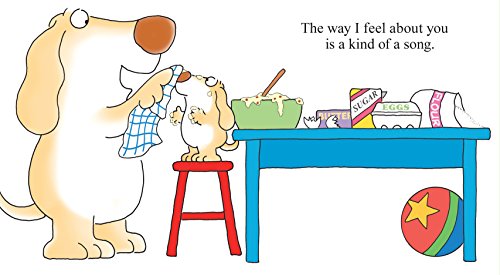 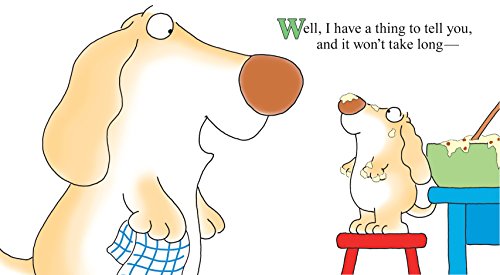 Product Description A great big hug in book form, Snuggle Puppy is a year-round valentine from parent to child. It is bright, chunky, a pleasure to hold, and has a die-cut cover that reveals a glimpse of the joy inside before it's even opened. Best of all, it's packed, of course, with pure Boynton: her inimitable language, her inimitable illustrations, her inimitable sense of fun. OOO, Snuggle Puppy of mine! Everything about you is especially fine. I love what you are. I love what you do. Fuzzy little Snuggle Puppy, I love you. Featuring a sweet and cuddly doggie cast and rhyming verse, Snuggle Puppy is the perfect bedtime book to read last, because of an ending that kids will want again and again: I started with OOO. . . . Now we'll end like this: [BIG SMOOCH!] Oversized lap edition also available—perfect for reading aloud! From the Back Cover Ooo, SNUGGLE PUPPY of mine. Everything about you is especially fine. About the Author Sandra Boynton is a popular American cartoonist, children's author, songwriter, producer, and director. Since 1974, Boynton has written and illustrated over sixty children's books and seven general audience books, including five New York Times bestsellers. More than 70 million of her books have been sold, "mostly to friends and family," she says. She has also written (with Michael Ford) and produced six albums of renegade children's music. Three of her albums have been certified Gold (over 500,000 copies sold), and Philadelphia Chickens, nominated for a Grammy, has gone Platinum (over 1 million copies sold). Boynton has also directed twelve music videos of her songs, including the award-winning "One Shoe Blues" starring B.B. King, "Alligator Stroll" starring Josh Turner, and "Tyrannosaurus Funk" (animation) sung by Samuel L. Jackson. She lives in rural New England, and her studio is in a barn with perhaps the only hippopotamus weathervane in America.

Current price$3.59
Since 32 hours
Average price$6.12
Based on 10 years
Lowest price ever$3.47
2 years ago
Highest price ever$6.95
18 months ago
Amazing
Great
Average
High
This is absolutely the best time to buy. Don’t miss out, there's 91% probability of this price being higher soon. Buy now.
Buy on Amazon

Julián Is a Mermaid

Boynton's Greatest Hits The Big Green Box: Happy Hippo, Angry Duck; But Not the Armadillo; Dinosaur Dance!; Are You A Cow?

Snuggle Puppy Boynton On Board, is it available on Amazon?

Yes! But at Pricepulse we inform you when is the lowest price to buy the Snuggle Puppy Boynton On Board

Should I buy the Snuggle Puppy Boynton On Board now?

What is the current price of Snuggle Puppy Boynton On Board?

What was the lowest price for the Snuggle Puppy Boynton On Board?