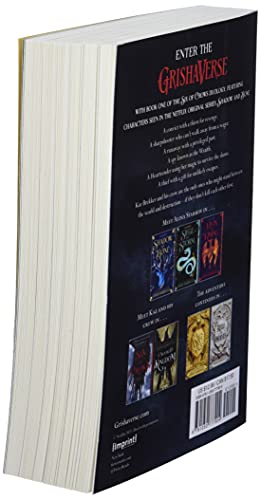 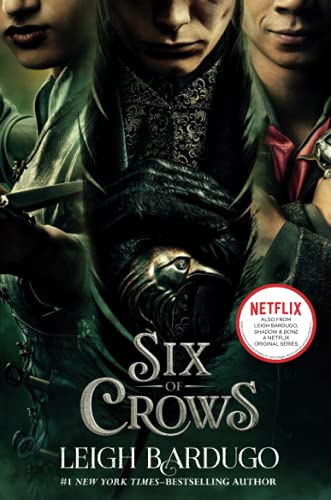 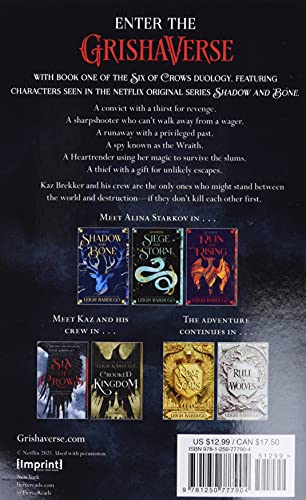 Product Description See the Grishaverse come to life on screen with Shadow and Bone, now a Netflix original series. Discover what comes next for heist trio Kaz, Inej, and Jesper -- and the star-crossed Nina and Matthias -- in the #1 New York Times bestseller Six of Crows, Book One of the Six of Crows Duology. This edition features exclusive cover art from the show! Ketterdam: a bustling hub of international trade where anything can be had for the right price―and no one knows that better than criminal prodigy Kaz Brekker. Kaz is offered a chance at a deadly heist that could make him rich beyond his wildest dreams. But he can't pull it off alone. . . . A convict with a thirst for revenge. A sharpshooter who can't walk away from a wager. A runaway with a privileged past. A spy known as the Wraith. A Heartrender using her magic to survive the slums. A thief with a gift for unlikely escapes. Six dangerous outcasts. One impossible heist. Kaz's crew is the only thing that might stand between the world and destruction―if they don't kill each other first.A #1 New York Times BestsellerAn Imprint Book.Read all the books in the Grishaverse!The Shadow and Bone Trilogy (previously published as The Grisha Trilogy) Shadow and Bone Siege and Storm Ruin and Rising The Six of Crows Duology Six of Crows Crooked KingdomThe King of Scars DuologyKing of ScarsRule of Wolves The Language of Thorns: Midnight Tales and Dangerous MagicThe Severed Moon: A Year-Long Journal of MagicPraise for the Grishaverse “A master of fantasy.” ―The Huffington Post “Utterly, extremely bewitching.” ―The Guardian “This is what fantasy is for.” ―The New York Times Book Review “[A] world that feels real enough to have its own passport stamp.” ―NPR “The darker it gets for the good guys, the better.” ―Entertainment Weekly “Sultry, sweeping and picturesque. . . . Impossible to put down.” ―USA Today “There’s a level of emotional and historical sophistication within Bardugo’s original epic fantasy that sets it apart.” ―Vanity Fair “Unlike anything I’ve ever read.” ―Veronica Roth, bestselling author of Divergent “Bardugo crafts a first-rate adventure, a poignant romance, and an intriguing mystery!” ―Rick Riordan, bestselling author of the Percy Jackson series About the Author Leigh Bardugo is a #1 New York Times-bestselling author and the creator of the Grishaverse (now a Netflix original series) which spans the Shadow and Bone Trilogy, the Six of Crows Duology, The Language of Thorns, and King of Scars―with more to come. Her short stories can be found in multiple anthologies, including the Best American Science Fiction & Fantasy. Her other works include Wonder Woman: Warbringer and Ninth House (Goodreads Choice Winner for Best Fantasy 2019) which is being developed for television by Amazon Studios. She lives in Los Angeles.

Stories of the Saints: Bold and Inspiring Tales of Adventure, Grace, and Courage

The Wonderful Things You Will Be

The Memory Box: A Book About Grief