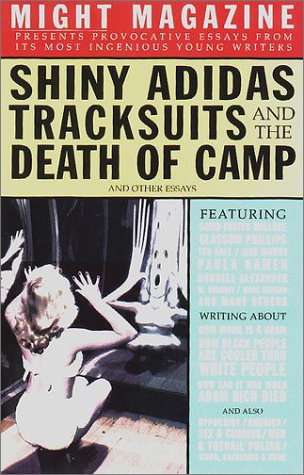 Product Description Takes a humorous look at the idiosyncrasies of American life Amazon.com Review This collection of essays from the late, lamented Might magazine deserves a place on any post-boomer's bookshelf. Shiny Adidas Tracksuits bristles with interesting thoughts and novel turns of phrase; most pieces are short (fewer than five pages), and all are well written and precisely observed. Referring to Might's editorial principles, the editors write: "One rule was that every issue of Might had to have a lot of swearing in it, ideally in the headlines. Another rule was that, even though we had about a month or two to put each issue together, the magazine had to go to press with somewhere between thirty and forty egregious spelling and grammatical errors. But the one rule that really got us into trouble, the one that basically doomed us from the start, was this one: We would not publish anything we didn't care about.... In observing this rule, the one that said we had to like the things we printed, we were precluded from publishing the sorts of things that might have kept the magazine afloat: namely articles about celebrities, clothes, electronics, makeup, cars, video games, beer, nightlife generally, and beer." Instead, the writers in Shiny Adidas Tracksuits and the Death of Camp describe quirky personal quests, examine pop-culture doodads, and spout crackpot theories. The book, like the magazine, somehow avoids the creeping contagion of irony and remains absolutely fresh, vigorous, and friendly. Apart from David Foster Wallace, most contributors aren't national commodities (which is sort of the point), but they deserve to be, and deserve your attention. This book is a fitting epitaph to a sparkler of a magazine. --Michael Gerber Review ...thoughtful and wide-ranging essays... -- Entertainment Weekly, Margot Mifflin About the Author Might magazine published from 1995-1997 with a circulation of over 30,000 subscribers. Their first book, For the Love of Cheese, has been featured in national magazines and newspapers.

Shiny Adidas Tracksuits And The Death Of Camp And, is it available on Amazon?

Yes! But at Pricepulse we inform you when is the lowest price to buy the Shiny Adidas Tracksuits And The Death Of Camp And

Should I buy the Shiny Adidas Tracksuits And The Death Of Camp And now?

What is the current price of Shiny Adidas Tracksuits And The Death Of Camp And?

What was the lowest price for the Shiny Adidas Tracksuits And The Death Of Camp And?