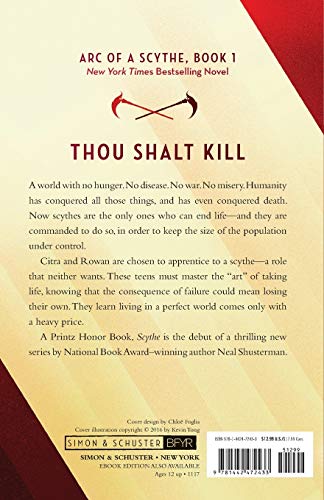 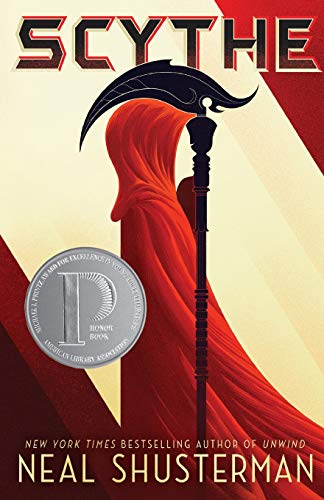 Product Description Two teens must learn the “art of killing” in this Printz Honor–winning book, the first in a chilling new series from Neal Shusterman, author of the New York Times bestselling Unwind dystology. A world with no hunger, no disease, no war, no misery: humanity has conquered all those things, and has even conquered death. Now Scythes are the only ones who can end life—and they are commanded to do so, in order to keep the size of the population under control. Citra and Rowan are chosen to apprentice to a scythe—a role that neither wants. These teens must master the “art” of taking life, knowing that the consequence of failure could mean losing their own. Scythe is the first novel of a thrilling new series by National Book Award–winning author Neal Shusterman in which Citra and Rowan learn that a perfect world comes only with a heavy price. Review "Elegant and elegiac, brooding but imbued with gallows humor, Shusterman's dark tale thrusts realistic, likeable teens into a surreal situation and raises deep philosophic questions. A thoughtful and thrilling story of life, death, and meaning." -- Kirkus Reviews "Shusterman is no stranger to pushing boundaries. Scythe owes an obvious debt to Unwind (2007) and its sequels, and this succeeds as a sort of shadow companion to Patrick Ness’ Chaos Walking trilogy: instead of exploring the ways in which men are monsters, this deals in what happens to men when there are no monsters. When our reach does not exceed our grasp, when comfort is more easily obtained than struggle, when our essential humanity doesn’t burn out but becomes slowly irrelevant, what becomes of us? Readers will find many things in these pages. Answers to such unsettling questions will not be among them." -- Maggie Reagan ― Booklist, STARRED REVIEW About the Author Neal Shusterman is the  New York Times bestselling author of more than thirty award-winning books for children, teens, and adults, including the Unwind dystology, the Skinjacker trilogy,  Downsiders, and  Challenger Deep, which won the National Book Award.  Scythe, the first book in his latest series, Arc of a Scythe, is a Michael L. Printz Honor Book. He also writes screenplays for motion pictures and television shows. Neal is the father of four, all of whom are talented writers and artists themselves. Visit Neal at StoryMan.com and Facebook.com/NealShusterman. Excerpt. © Reprinted by permission. All rights reserved. Scythe It is the most difficult thing a person can be asked to do. And knowing that it is for the greater good doesn’t make it any easier. People used to die naturally. Old age used to be a terminal affliction, not a temporary state. There were invisible killers called “diseases” that broke the body down. Aging couldn’t be reversed, and there were accidents from which there was no return. Planes fell from the sky. Cars actually crashed. There was pain, misery, despair. It’s hard for most of us to imagine a world so unsafe, with dangers lurking in every unseen, unplanned corner. ?All of that is behind us now, and yet a simple truth remains: People have to die. It’s not as if we can go somewhere else; the disasters on the moon and Mars colonies proved that. We have one very limited world, and although death has been defeated as completely as polio, people still must die. The ending of human life used to be in the hands of nature. But we stole it. Now we have a monopoly on death. We are its sole distributor. I understand why there are scythes, and how important and how necessary the work is . . . but I often wonder why I had to be chosen. And if there is some eternal world after this one, what fate awaits a taker of lives? —From the gleaning journal of H.S. Curie

Dog Man: Brawl of the Wild: From the Creator of Captain Underpants (Dog Man #6)

Kindness is my Superpower: A children's Book About Empathy, Kindness and Compassion

Celebrate Your Feelings: The Positive Mindset Puberty Book for Girls

Scythe 1 Arc Of A Scythe, is it available on Amazon?

Yes! But at Pricepulse we inform you when is the lowest price to buy the Scythe 1 Arc Of A Scythe

Should I buy the Scythe 1 Arc Of A Scythe now?

What is the current price of Scythe 1 Arc Of A Scythe?

What was the lowest price for the Scythe 1 Arc Of A Scythe?