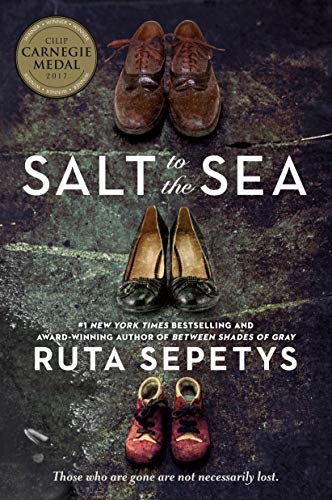 Product Description #1 New York Times bestseller and winner of the Carnegie Medal! "A superlative novel . . . masterfully crafted."--The Wall Street JournalBased on "the forgotten tragedy that was six times deadlier than the Titanic."--Time Winter 1945. WWII. Four refugees. Four stories. Each one born of a different homeland; each one hunted, and haunted, by tragedy, lies, war. As thousands desperately flock to the coast in the midst of a Soviet advance, four paths converge, vying for passage aboard the Wilhelm Gustloff, a ship that promises safety and freedom. But not all promises can be kept . . . This paperback edition includes book club questions and exclusive interviews with Wilhelm Gustloff survivors and experts. Review Praise for Salt to the Sea: A #1 New York Times Bestseller An International Bestseller Winner of the Carnegie Medal Featured on NPR's Morning Edition   "Ruta Sepetys acts as champion of the interstitial people so often ignored — whole populations lost in the cracks of history."— The New York Times   "Superlative...masterfully crafted...[a] powerful work of historical fiction."—The Wall Street Journal [Sepetys is] a master of YA fiction…she once again anchors a panoramic view of epic tragedy in perspectives that feel deeply textured and immediate."—Entertainment Weekly "[A] riveting novel . . . Sepetys skillfully weaves history into her story, here grounding her nuanced characters in the events of winter 1945. Vivid details punctuate the spare prose."— The Washington Post "[H]aunting, heartbreaking, hopeful and altogether gorgeous...one of the best young-adult novels to appear in a very long time."—Salt Lake Tribune   "Ruta Sepetys is a master of historical fiction. In  Salt to the Sea the hard truths of her herculean research are tempered with effortless, intimate storytelling, as her warm and human characters breathe new life into one of the world's most terrible and neglected tragedies." — Elizabeth Wein, New York Times bestselling author of Printz Award Honor Book Code Name Verity “A rich, page-turning story that brings to vivid life a terrifying—and little-known—moment in World War II history.” — Steve Sheinkin, author of Newbery Honor and National Book Award finalist Bomb   "Brutal. Beautiful. Honest." — Sabaa Tahir, New York Times bestselling author of An Ember in the Ashes "Ruta Sepetys is more than just an author — she's history's answer to CSI."— Mashable "[A] stunning historical novel."— Hypable   * "Sepetys excels in shining light on lost chapters of history, and this visceral novel proves a memorable testament to strength and resilience in the face of war and cruelty." — Publishers Weekly, starred review    * "This haunting gem of a novel begs to be remembered, and in turn, it tries to remember the thousands of real people its fictional characters represent. What it asks of us is that their memories, and their stories, not be abandoned to the sea."  —Booklist, starred review   * "Artfully told and sensitively crafted, Sepetys’s exploration of this little-known piece of history will leave readers weeping."  —SLJ, starred review "The inevitability of the ending (including the loss of several characters) doesn't change its poignancy, and the short chapters and slowly revealed back stories for each character guarantee the pages keep turning. Heartbreaking, historical, and a little bit hopeful." — Kirkus Reviews "Intimate, extraordinary, artfully crafted...brilliant."—Shelf Awareness    "This book includes all the reasons why teens read:  for knowledge, for romance, for amazing and irritating characters.  This novel will break readers’ hearts and then put them back together a little more whole." — VOYA "Sepetys’s...scene-setting is impeccable; the penetrating cold of the journey is palpable, and she excels at conveying the scope of the losses while giving them a human face....[T]his elegiac tale succeeds with impressive research, affecting characters, and k

Current price$7.49
Since 4 months
Average price$8.86
Based on 4 years
Lowest price ever$7.03
20 months ago
Highest price ever$10.98
3 years ago
Amazing
Great
Average
High
This is absolutely the best time to buy. Don’t miss out, there's 85% probability of this price being higher soon. Buy now.
Buy on Amazon

Dr. Seuss's ABC (Beginner Books, I Can Read It All By Myself)

Salt To The Sea 172 Jeunesse, is it available on Amazon?

Yes! But at Pricepulse we inform you when is the lowest price to buy the Salt To The Sea 172 Jeunesse

Should I buy the Salt To The Sea 172 Jeunesse now?

This is absolutely the best time to buy. Don’t miss out, there's 85% probability of this price being higher soon. Buy now.

What is the current price of Salt To The Sea 172 Jeunesse?

What was the lowest price for the Salt To The Sea 172 Jeunesse?