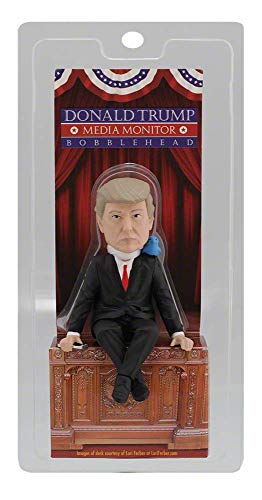 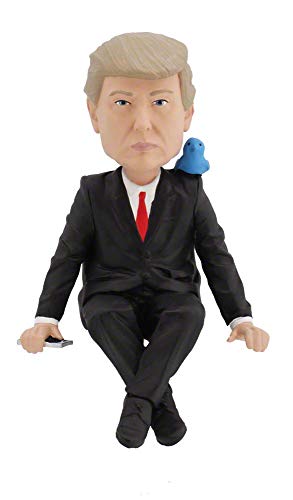 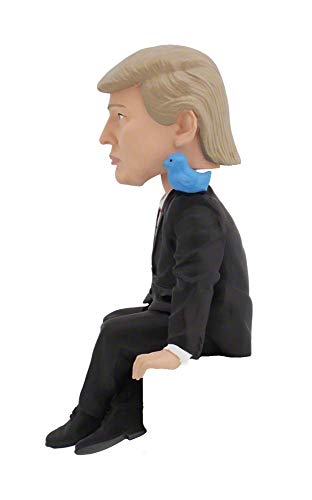 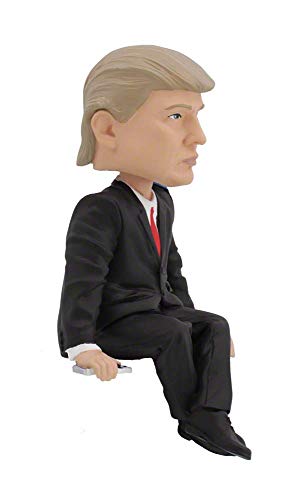 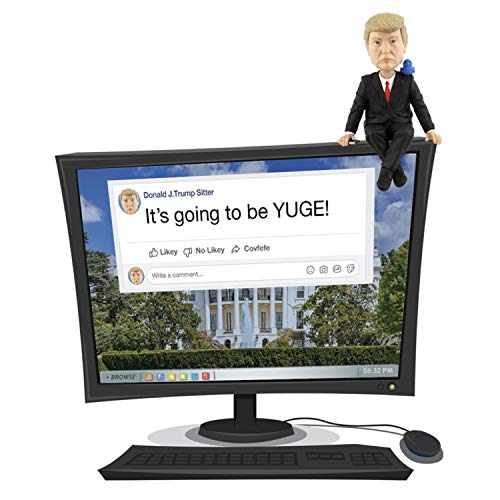 This Donald Trump bobblehead is part of Royal Bobbles’ collection of famous icons. This collection features icons in American history whom we all love and cherish. Have you ever found yourself wondering what to post on social media or whether that article you just read is true? Have no fear, the Trump Media Sitter is here! Renowned for having “the best words,” let this miniature Trump patrol your desk for “fake news” or “covfefes” that might be lingering nearby. This specific bobblehead features President Donald Trump in a sitting position with a little blue bird on his shoulder. Throughout American history, our American presidents have used various means to communicate with others. FDR used radio and Trump is known for using social media. Donald John Trump was born on June 14, 1946, in Queens, New York. In June 2015, Trump declared his candidacy for President of the United States as a hopeful for the Republican nomination. Since that time, his campaign events have had record turnouts, and his appearances have broken records. The first GOP debate, moderated by Fox News, was watched by a record 24 million viewers, according to Nielsen data, making it the highest-rated primary debate in television history. Donald J. Trump won the presidential election on November 8th, 2016 and became the President-elect. On January 20th, 2017, Donald J. Trump took the oath of office and became the 45th President of the United States. This model is crafted with extreme attention to detail and is of the highest possible quality. This bobblehead sitter is made from high-quality, heavyweight polyresin, and sits at 4 inches tall from head to toe and is hand painted, making each one unique. Each Royal Bobbles product comes with its own unique serial number on the bottom of the base to indicate authenticity.

Current price$19.95
Since 10 months
Average price$18.04
Based on 2 years
Lowest price ever$17.90
2 years ago
Highest price ever$21.95
2 years ago
Amazing
Great
Average
High
It's not a good time to buy now, there's a 96% probability this price will decrease. Our advise is to Watch it.
Buy on Amazon

Yes! But at Pricepulse we inform you when is the lowest price to buy the Royal Bobbles Donald Trump Media Monitor Bobblehea

It's not a good time to buy now, there's a 96% probability this price will decrease. Our advise is to Watch it.

What is the current price of Royal Bobbles Donald Trump Media Monitor Bobblehea?

What was the lowest price for the Royal Bobbles Donald Trump Media Monitor Bobblehea?