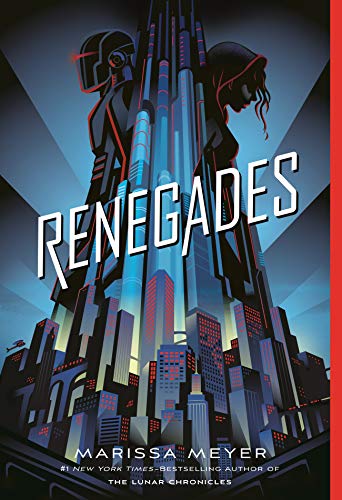 Product Description A high-stakes world of adventure, passion, danger, and betrayal . . . . From #1 New York Times-bestselling author Marissa Meyer comes the New York Times-bestselling YA novel Renegades. Secret Identities.Extraordinary Powers.She wants vengeance. He wants justice.The Renegades are a syndicate of prodigies―humans with extraordinary abilities―who emerged from the ruins of a crumbled society and established peace and order where chaos reigned. As champions of justice, they remain a symbol of hope and courage to everyone...except the villains they once overthrew.Nova has a reason to hate the Renegades, and she is on a mission for vengeance. As she gets closer to her target, she meets Adrian, a Renegade boy who believes in justice―and in Nova. But Nova's allegiance is to a villain who has the power to end them both.Praise for Renegades:A New York Times bestsellerA Winter 2017-2018 Kids' Indie Next List Selection“Blends sci-fi and action like a young adult X-Men novel, asking what it means to be a hero and what it means to be a villain.” ―Paste Magazine“Beyond the capes and masks is a strikingly grounded story of star-crossed would-be lovers, deception, and the recognition that most of humanity exists between the extremes of good and evil.” ―Publishers Weekly, starred reviewDon't miss these other books from #1 New York Times- and USA Today-Bestselling author Marissa Meyer:The Lunar Chronicles:CinderScarletCress WinterStars AboveFairestThe Lunar Chronicles Coloring BookWires and Nerve: Vol. 1Wires and Nerve: Vol. 2Renegades:Renegades: Book OneHeartless Review Praise for Renegades:A New York Times bestsellerA Winter 2017-2018 Kids' Indie Next List Selection“Starts with a tragic bang and ends with a shocking disclosure, keeping readers spinning in a blur of fierce action and emotional drama along the way.” ―RT Book Reviews“Tackles a familiar genre in a brand new way.” ―Hypable.com“A fully realized new world with compelling characters and just enough edge-of-your-seat action to rival thebiggest on-screen adaptation.” ―Bustle“Exciting. . . . perfect for your Fall #TBR list.” ―PopSugar.com“Even reluctant fans of hero fantasies will fall for the smart plot and wonderful world-building. Prepare to fangirl.” ―Justine Magazine“Delivers a balance between intricate world-building and fast-paced action sequences. . . . Back-stabbing, plot twists, and hidden agendas will have readers turning pages in an attempt to discover the truth.” ―School Library Journal“The world is exceptionally well crafted, particularly the complex backstory of the rise of prodigies among humans, and the secondary cast of villains and heroes could give Marvel and DC a run for their money.” ―The Bulletin of the Center for Children's Books, Recommended About the Author Marissa Meyer is the #1 New York Times–bestselling author of the Renegades Trilogy, The Lunar Chronicles series, the Wires and Nerve graphic novels, and The Lunar Chronicles Coloring Book. Her first standalone novel, Heartless, was also a #1 New York Times bestseller. Marissa created and hosts a podcast called The Happy Writer. She lives in Tacoma, Washington, with her husband and their two daughters.

Current price$6.59
Since 2 months
Average price$8.12
Based on 2 years
Lowest price ever$6.55
13 months ago
Highest price ever$10.99
2 years ago
Amazing
Great
Average
High
This is absolutely the best time to buy. Don’t miss out, there's 59% probability of this price being higher soon. Buy now.
Buy on Amazon

Renegades Renegades 1, is it available on Amazon?

Yes! But at Pricepulse we inform you when is the lowest price to buy the Renegades Renegades 1

This is absolutely the best time to buy. Don’t miss out, there's 59% probability of this price being higher soon. Buy now.

What is the current price of Renegades Renegades 1?

What was the lowest price for the Renegades Renegades 1?

The lowest historical price was $6.55