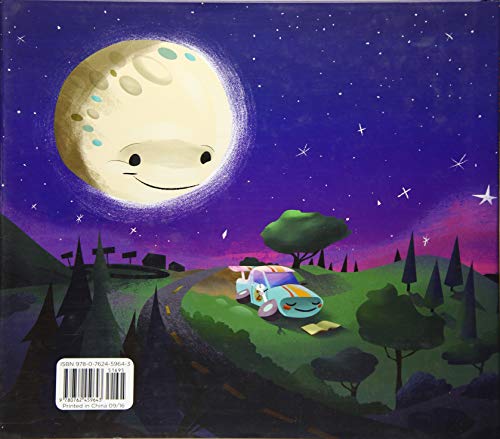 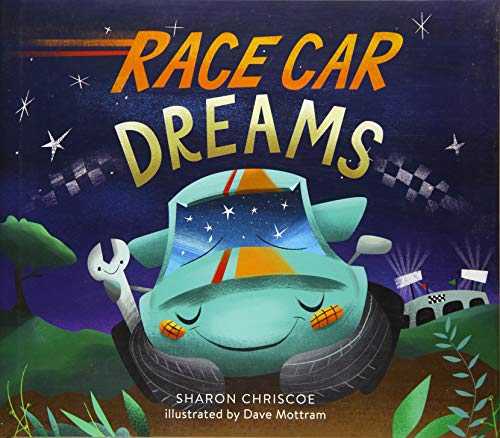 Product Description After a day at the track of zipping and zooming, a race car is tired and ready for bed. He washes his rims, fills his tummy with oil, and chooses a book that is all about speed. All toasty and warm, he drifts off to sleep, he shifts into gear . . . and dreams of the race! From School Library Journal PreS-Gr 1—After a busy day at the track, one little race car gets ready for bed. He visits the Tickle-and-Wash for a shower and shine, stops for a fill-up at the Guzzle-and-Gulp, and chooses a bedtime book from the Speedy Reads Library before curling up with his wrench for the night—inexplicably in the middle of a field rather than in a garage. As he drifts off to sleep, the little car dreams of winning his next big race. The story unfolds in rhythmic four-line stanzas and is composed with a calm, soothing tone that makes this perfect for reading aloud before bed. Largely bathed in a cool nighttime palette of greens, blues, and violets, Mottram's colorful cartoon illustrations bring charming expressions to anthropomorphized vehicles and tools. VERDICT This sweet bedtime offering is ideal for vehicle and auto-racing enthusiasts.—Lauren Strohecker, McKinley Elementary School, Abington School District, PA Review After a high-octane day, this anthropomorphic race car is tired and "wringing with sweat." His headlights blink on, and he drives to the pit for a good bath. Inaddition to the foamy sudsing, he also washes his rims and shines up his chrome. Now he's as good as new; baby blue with a thick gold stripe running right down the middle and a big "2" on the doors. It's also time for an oil change; at the shop, "he guzzles and gulps each dark, oily drop." Now he'sready for sleep, but not before a good bedtime story. He chooses Run Cheetah,"a book that's all about speed." Resting in a green field studded with trees, he "snuggles his wrench" under one wheel as the moon shines bright. He turns onthe heat to warm up his grille. "His engine now hums. He lets out a snore. /His bumpers relax and sprawl on the floor." Chriscoe's crisply rhyming text is enlivened by lots of punny expressions and colorful language, and little readers are not likely to be sticklers about things like sweaty cars. Mottram's artwork is similarly bright and lively, though youngsters will notice that the little car doesn't seem to have a grille, and the "floor" he sprawls on is grass. All in all, clever, bouncy fun. --Kirkus Reviews (6/15/16) When day is done at the raceway, a tired, sweaty little race car yawns and rolls down the road to the Tickle and Wash, where suds rain down and brushes remove the grime. All clean, the hungry auto drives into the Guzzle and Gulp, where oil funnels down into his engine. Picking up a book about cheetahs, he settles down comfortably in a nearby field, reads for a bit, and falls asleep. Soon he is dreaming of another race, where he "takes home first place." Rhymed couplets detail the car's activities, while sensory words bring the story to life. An illustrator with a background in design, Mottram creates a likable, animated protagonist whose moods are easy to read in his headlight eyes and wide, expressive mouth. The artwork creates a real sense of depth in its nicely composed, richly colored scenes. While the car wash is sure to be a hit with young children, it's the amiable character's comforting evening ritual that will help young race fans gear down and enjoy their own bedtimes. -- Carolyn Phelan  ~ Booklist (7/7/2016)        About the Author Sharon Chriscoe may not vroom around a race track, but she does zip and zoom around in a bread truck with her husband, Ricky. Fueled with fresh bread, snacks, and writing tools, Sharon has made this her mobile office! She and her husband live in Pilot Mountain, North Carolina. They have three children, one grandchild, and an assortment of dogs, cats, bunnies and occasionally a groundhog. Sharon is also the author of the forthcoming Bulldozer Dreams

Frozen Mountain: Decide your destiny with a pop-out fortune spinner (Spin to Survive)

I Am Every Good Thing

Race Car Dreams, is it available on Amazon?

Yes! But at Pricepulse we inform you when is the lowest price to buy the Race Car Dreams

Should I buy the Race Car Dreams now?

What is the current price of Race Car Dreams?

What was the lowest price for the Race Car Dreams?