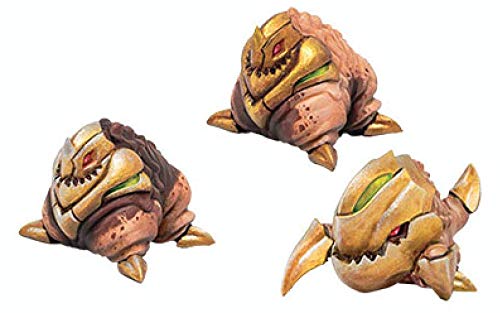 Monsterpocalypse is a fast-moving, action-packed battle miniatures game played with detailed hobby miniatures that players assemble and paint to portray the most fearsome giant monsters on earth! when the battle begins, you’ll command your monster and lead your units into the city to hunt down and destroy your opponents monster. Your monster and units each have weapons and abilities that are activated by special dice to help you achieve ultimate victory. Monsters can increase their power throughout the game by smashing buildings and destroying enemy units. When two monsters fight each other, the results are devastating—they can throw each other across the city, RAMPAGE through buildings, and suplex each other into radioactive Rubble! the last monster standing wins the game.

Current price$13.83
Since 17 days
Average price$17.15
Based on 2 years
Lowest price ever$13.83
17 days ago
Highest price ever$17.95
54 days ago
Amazing
Great
Average
High
This is absolutely the best time to buy. Don’t miss out, there's 83% probability of this price being higher soon. Buy now.
Buy on Amazon

Yes! But at Pricepulse we inform you when is the lowest price to buy the Privateer Press Pip51006 Monsterpocalypse Planet E

This is absolutely the best time to buy. Don’t miss out, there's 83% probability of this price being higher soon. Buy now.

What is the current price of Privateer Press Pip51006 Monsterpocalypse Planet E?

What was the lowest price for the Privateer Press Pip51006 Monsterpocalypse Planet E?