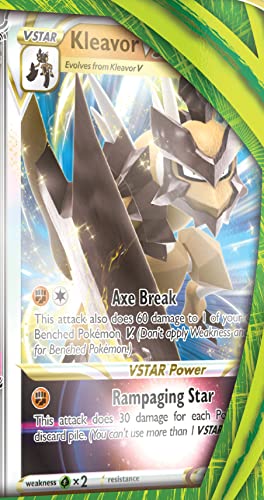 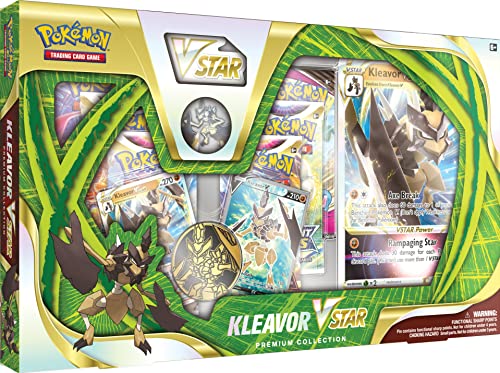 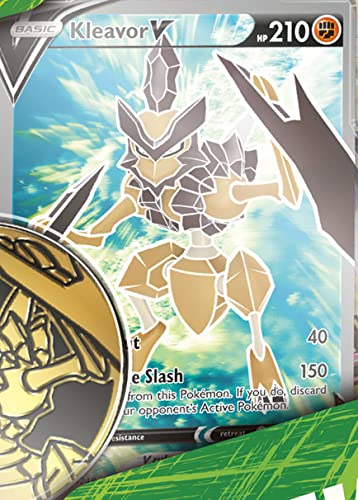 Kleavor is ready to slash and crash its way out of the wilderness and into your deck in the Pokémon TCG: Kleavor VSTAR Premium Collection. This powerful Pokémon arrives with both arms swinging as both an etched foil Pokémon V and Pokémon VSTAR promo card. With these Fighting-type Pokémon on your team, your opponent will have to tread lightly. Kleavor V's Axe Slash attack hits for a respectable 150 damage, but it requires you to discard an Energy that's attached to it. Thankfully, your opponent also must discard an Energy from their Active Pokémon. Talk about adding insult to injury! Kleavor V can evolve into Kleavor VSTAR, whose Axe Break attack does 120 damage to your opponent's Active Pokémon and another 60 damage to one of their Benched Pokémon V. If you've already lost some Pokémon, unleash Kleavor VSTAR's Rampaging Star VSTAR Power to do 30 damage for each Pokémon in your discard pile. When used at the right time, this attack can be devastating to your opponent. In addition to these two incredible cards, this collection also includes an oversize foil Kleavor VSTAR card, a collector's pin, a metallic coin featuring Kleavor, an acrylic VSTAR marker, and six Pokémon TCG booster packs. With all this on your side, you'll be ready to go on the rampage with Kleavor VSTAR.

Amazing
Great
Average
High
This is absolutely the best time to buy. Don’t miss out, there's 42% probability of this price being higher soon. Buy now.
Buy on Amazon

Santorini New York, Strategy Board Game, for Adults and Kids Ages 8 and up

Constructive Playthings Wooden Tube Sorting Blocks to Explore Color and Size Gradation; Each Board is 8" sq. and Tallest Tube is 2 1/4" H. x 2 1/4" Diam. for Ages 3 Years and Up

Yes! But at Pricepulse we inform you when is the lowest price to buy the Pokemon Tcg Kleavor Vstar Collection Box

This is absolutely the best time to buy. Don’t miss out, there's 42% probability of this price being higher soon. Buy now.

What is the current price of Pokemon Tcg Kleavor Vstar Collection Box?

What was the lowest price for the Pokemon Tcg Kleavor Vstar Collection Box?