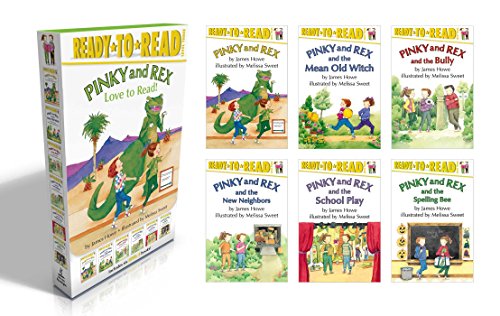 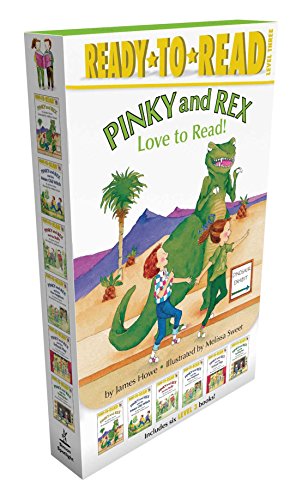 Product Description Join best friends Pinky and Rex on their many adventures with this carry-along Ready-to-Read boxed set featuring six of your favorite Pinky & Rex Level 3 Ready-to-Read stories—perfect to take on the go. Pinky and Rex are the best of friends! Now you can take their friendship on the go with six Pinky and Rex Ready-to-Reads in one beautiful boxed set that comes with a carry-along handle. A must-have for any young reader, this wonderful boxed set includes Pinky and Rex, Pinky and Rex and the Bully, Pinky and Rex and the New Neighbors, Pinky and Rex and the School Play, Pinky and Rex and the Mean Old Witch, and Pinky and Rex and the Spelling Bee. About the Author James Howe is the author of more than ninety books for young readers.  Bunnicula, coauthored by his late wife Deborah and published in 1979, is considered a modern classic of children’s literature. The author has written six highly popular sequels, along with the spinoff series Tales from the House of Bunnicula and Bunnicula and Friends. Among his other books are picture books such as Horace and Morris but Mostly Dolores and beginning reader series that include the Pinky and Rex and Houndsley and Catina books. He has also written for older readers.  The Misfits, published in 2001, inspired the antibullying initiative No Name-Calling Week, as well as three sequels,  Totally Joe, Addie on the Inside, and  Also Known as Elvis. A common theme in James Howe’s books from preschool through teens is the acceptance of difference and being true to oneself. Visit him online at JamesHowe.com. Melissa Sweet has illustrated more than eighty children’s books, including the Caldecott Honor books The Right Word and A River of Words: The Story of William Carlos Williams both written by Jen Bryant. She also wrote and illustrated Tupelo Rides the Rails; Carmine: A Little More Red, which was a New York Times Best Illustrated Children’s Book; and Balloons Over Broadway, a picture book biography that was named a 2011 Publishers Weekly Best Nonfiction Picture Book. When she is not in her studio, Melissa can be found taking an art class, hiking with her dogs, or riding her bicycle. She lives with her family in Rockport, Maine.

Current price$13.75
Since 2 months
Average price$11.38
Based on 4 years
Lowest price ever$5.61
13 months ago
Highest price ever$17.99
17 months ago
Amazing
Great
Average
High
It's not a good time to buy now, there's a 75% probability this price will decrease. Our advise is to Watch it.
Buy on Amazon

Zyllion Shiatsu Back and Neck Massager with Heat for Deep Tissue Kneading Massage - Use on Shoulders, Feet, Thighs, and Calves (ZMA-28)

Zyllion Shiatsu Back and Neck Massager with Heat for Deep Tissue Kneading Massage - Use on Shoulders, Feet, Thighs, and Calves (ZMA-28)

It's not a good time to buy now, there's a 75% probability this price will decrease. Our advise is to Watch it.