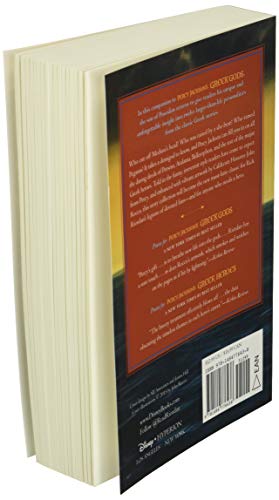 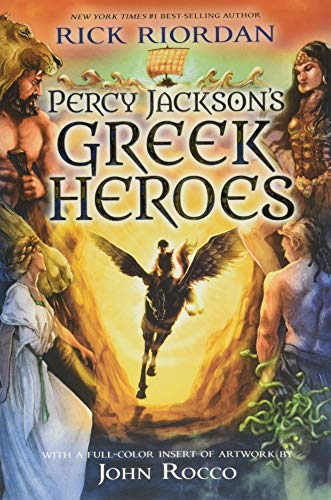 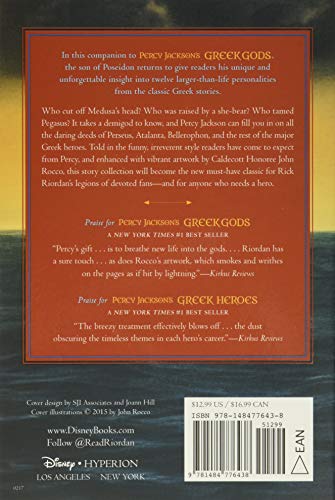 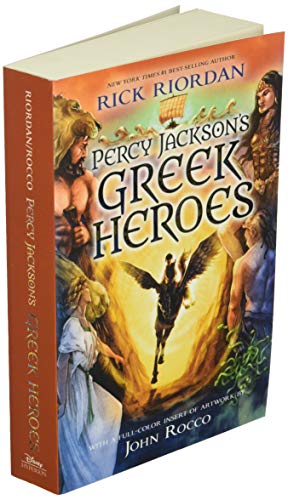 Product Description From New York Times best-selling author, Rick Riordan, comes the companion to PERCY JACKSON'S GREEK GODS, now in paperback. The son of Poseidon returns to give readers his unique and unforgettable insight into twelve larger-than-life personalities from the classic Greek stories. Who cut off Medusa's head? Who was raised by a she-bear? Who tamed Pegasus? It takes a demigod to know, and Percy Jackson can fill you in on the all the daring deeds of Perseus, Atalanta, Bellerophon, and the rest of the major Greek heroes. Told in the funny, irreverent style readers have come to expect from Percy, ( I’ve had some bad experiences in my time, but the heroes I’m going to tell you about were the original old school hard luck cases. They boldly screwed up where no one had screwed up before. . .) and enhanced with vibrant artwork by Caldecott Honoree John Rocco, this story collection will become the new must-have classic for Rick Riordan's legions of devoted fans--and for anyone who needs a hero. So get your flaming spear. Put on your lion skin cape. Polish your shield and make sure you’ve got arrows in your quiver. We’re going back about four thousand years to decapitate monsters, save some kingdoms, shoot a few gods in the butt, raid the Underworld, and steal loot from evil people. Then, for dessert, we’ll die painful tragic deaths. Ready? Sweet. Let’s do this. Review PRAISE FOR PERCY JACKSON'S GREEK HEROES "A colorful and quite enormous companion volume to Percy Jackson’s Greek Gods (2014), this inviting book retells the stories of 12 notable figures from Greek mythology. . .Riordan casts a wide net in choosing his heroes, and the inclusion of four women in this traditionally male-dominated category broadens the book’s appeal as well as its scope. Written in the voice of Percy Jackson, these ancient stories sound fresh and vital. Rocco contributes many beautifully composed and dramatic paintings, from full-page action scenes to vertical side panels to small portraits at chapter headings." ― Booklist PRAISE FOR PERCY JACKSON'S GREEK HEROES "Percy Jackson, the narrator of Riordan’s novels, has returned to retell traditional Greek myths. Written from Percy’s first-person point of view, the book tells a dozen stories, including the original Perseus and the Gorgons, Eros and Psyche, and Atalanta. Complemented by Rocco’s elegant paintings, and printed on the thick smooth paper one expects in an art reference, this book is a unique combination: classical Greek myth reference and a very 21st-century retelling. . .it is a joy to read or read aloud, with enough humor to entice and entertain adults, reluctant readers, and mythology fans, as well as fans of Riordan’s earlier books. If you can, buy two: one for reference and one to circulate."― VOYA About the Author Rick Riordan, dubbed “storyteller of the gods” by Publishers Weekly, is the author of three #1 New York Times best-selling middle grade series with millions of copies sold throughout the world: Percy Jackson and the Olympians, based on Greek mythology; the Kane Chronicles, based on Ancient Egyptian mythology; and the Heroes of Olympus, based on Greek and Roman mythology. Rick collaborated with illustrator John Rocco on two best-selling collections of Greek myths for the whole family: Percy Jackson’s Greek Gods and Percy Jackson’s Greek Heroes. The first book in his Magnus Chase and the Gods of Asgard trilogy based on Norse mythology, The Sword of Summer, also debuted at #1 on the New York Times list. Rick lives in Boston, Massachusetts with his wife and two sons. Follow him on Twitter at @camphalfblood. John Rocco (www.roccoart.com) studied illustration at Rhode Island School of Design and The School of Visual Arts. In addition to writing and illustrating several of his own picture books, including Blizzard and the Caldecott Honor-winning and New York Times best-selling Blackout, he h

The Demigod Files (A Percy Jackson and the Olympians Guide)

The Demigod Files (A Percy Jackson and the Olympians Guide)