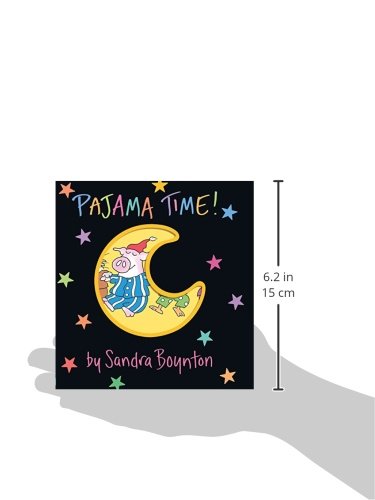 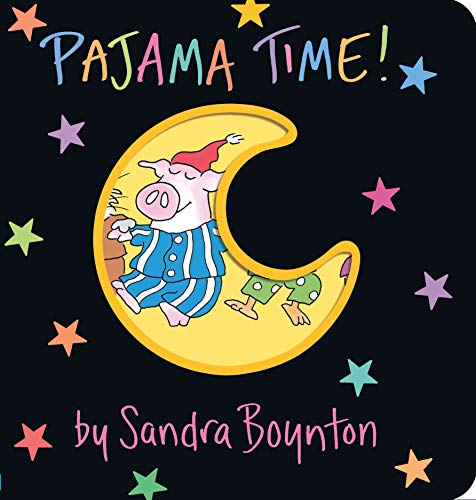 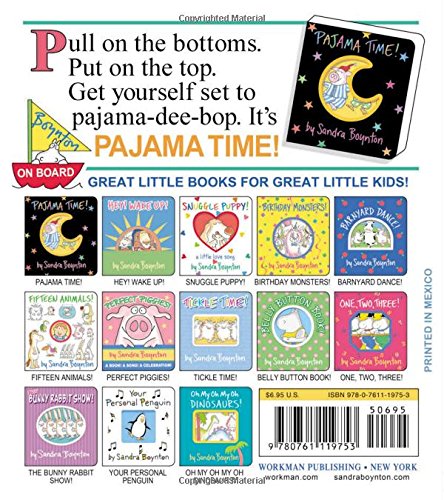 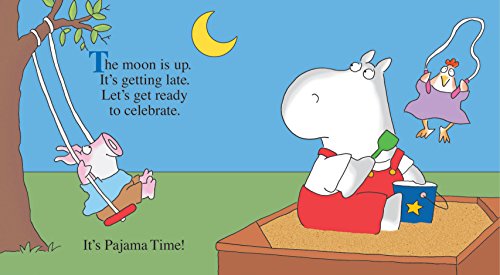 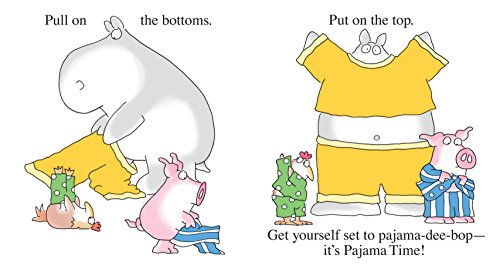 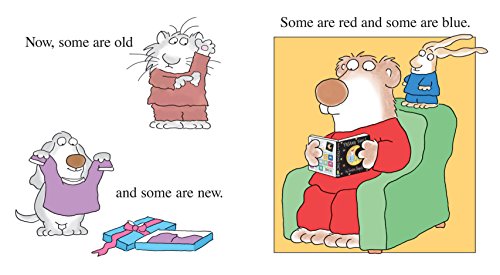 Product Description Pull on the bottoms. Put on the top. Get yourself set to pajama-dee-bop—it's PAJAMA TIME! Pajama Time! is a good-night book with the irrepressible language, the inimitable illustrations, the irresistible cast of characters only Sandra Boynton could create. A jump-roping chicken and a pig on a swing. A Scottie in plaid pajamas and an elephant in a fuzzy one-piece with feet. And in sing-along nuttiness reminiscent of Barnyard Dance!, it's time to head to bed-to the beat: Pajammy to the left. Pajammy to the right. Jamma jamma jamma jamma P!J! Everybody's wearing them for dancing tonight. Jamma jamma jamma jamma P!J! Oversized lap edition also available—perfect for reading aloud! From School Library Journal PreSchool-Two rhyming board books that present familiar concepts. The first one introduces morning activities such as yawning, stretching, breakfast, getting dressed, and playtime. The second title looks at the various sleep outfits that the endearing creatures put on before joining a pajama party: "Pajammy to the left. Pajammy to the right.-Everybody's wearing them for dancing tonight." Everyone finally settles down, the lights are turned out, and wishes are shared for a hushed good night. Boynton's characters are as lovable as ever, all with expressions sure to win over toddlers. Olga R. Barnes, Public Library of Charlotte & Mecklenburg County, NC Copyright 2001 Reed Business Information, Inc. From the Publisher The Boynton Board books are compact treasures just right for little kids. Each book is replete with full-color drawings and comes with a die-cut cover. Also in the series are: HEY! WAKE UP!, a good-morning companion book; BIRTHDAY MONSTERS!, filled with monsters wreaking havoc; BARNYARD DANCE!, a sing-along book set on the farm; ONE, TWO, THREE!, a counting book presented by various animals; OH MY OH MY OH DINOSAURS!, a counting book presented by various animals. From the Back Cover Pull on the bottoms. Put on the top. Get yourself set to pajama-dee-bop—it's PAJAMA TIME! About the Author Sandra Boynton is a popular American cartoonist, children's author, songwriter, producer, and director. Since 1974, Boynton has written and illustrated over sixty children's books and seven general audience books, including five New York Times bestsellers. More than 70 million of her books have been sold, "mostly to friends and family," she says. She has also written (with Michael Ford) and produced six albums of renegade children's music. Three of her albums have been certified Gold (over 500,000 copies sold), and Philadelphia Chickens, nominated for a Grammy, has gone Platinum (over 1 million copies sold). Boynton has also directed twelve music videos of her songs, including the award-winning "One Shoe Blues" starring B.B. King, "Alligator Stroll" starring Josh Turner, and "Tyrannosaurus Funk" (animation) sung by Samuel L. Jackson. She lives in rural New England, and her studio is in a barn with perhaps the only hippopotamus weathervane in America.

'Twas the Night Before Christmas on the Farm: Celebrate the Holidays with this Sweet Farm Animal Book for Children

I Love You Like No Otter: A Funny and Sweet Book For Babies And Toddlers (Board Books, Baby Animals Books) (Punderland)

Pajama Time Boynton On Board, is it available on Amazon?

Yes! But at Pricepulse we inform you when is the lowest price to buy the Pajama Time Boynton On Board

Should I buy the Pajama Time Boynton On Board now?

What is the current price of Pajama Time Boynton On Board?

What was the lowest price for the Pajama Time Boynton On Board?